Seldom, if ever, have I been so enamored with a movie. Emir Kusturica weaves a poignant, comic, vicious, madcap, sprawling, and physics defying cinematic experience deftly intertwined with the history of Yugoslavia and its successor states.

Two friends build a massive underground weapons making complex to protect their town from the German invasion in WWII while they join the communist guerilla fighters.  Both fall for the same woman — an actress who helps the Germans and also has a bungling/comical German lover. Eventually, one friend is injured and remains underground while the other rises up through the ranks of the Tito regime (and adapts an elaborate system to convince those still hidden underground that WWII is still being waged).  I best not spoil the rest!

Most criticism of the film I’ve read revolves around Kusturica’s interpretation historical events. Although I’m not Serbian or Bosnian but I do have some basic knowledge concerning the break-up of the Yugoslavia, WWII, and the Serbian atrocities inflicted on various other ethnic groups in the region.

Emir Kusturica was so badgered by attacks concerning his glossing over of the real issues of the succession (ethnic cleansing etc…) that he was forced into voluntary film retirement (thankfully that did not last long) because of the hostile reaction he received at home even though he won the prestigious Palm de’Or at Cannes in 1995.

I do not have a clear rebuttal, but I can say that this exclusion should not condemn him. The monumental task of embodying the history of a country, the feelings of a people, into an extended family over 60 years cannot and should not include everything. A WWII movie about the invasion of Normandy most likely will not address the Holocaust — neither will a movie about German U-boat captains address the Nazi invasion of Russia in any depth. The material which he covers for a Hollywood director would be material for tons of movies. His concentration on a single family (and the history that eddies around them) excludes discussion of atrocities for to quote Kusturica, “they were not all bad.”

This statement is depressing in the context of the movie itself for it is hard for the audience to sympathize with anyone. Those that are truly innocent are either mentally handicapped or hidden underground and brainwashed with Tito propaganda.

That is the chilling part of the film and I feel it is the crux of his message. Many people in Yugoslavia were misguided, but in the context of the extreme isolation of Tito’s regime and WWII these actions are definitely not to be forgiven but perhaps, understood in context to a greater degree.

The acting is impeccable. Miki Manojlovic is my personal favorite portraying the alcoholic womanizing and eventually fiercely loyal husband. The chemistry between him and his best friend (Lazar Ristovski) is exceptional as is the love triangle with Mirjana Jokovic (an amazing actress). Slavko Stimac plays the mentally slow Ivan and his journey through the tunnels in search of his chimpanzee friend is harrowing and frightening. 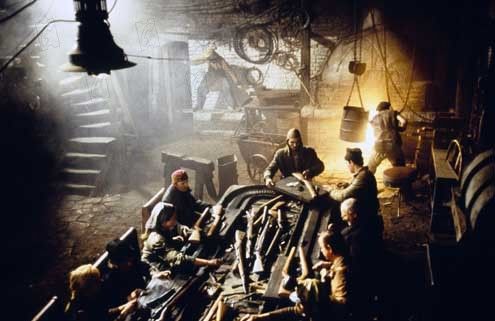 My favorite element of Emir Kusturica’s films is his use of magical realism. This element is normally used by South American writers, and Italo Calvino and Borges in Europe but rarely is it used in Cinema. If used poorly it can seem corny and contrived. Emir is the master of using the technique, for example, the glorious Underground wedding scene with the bride connected to the wheeled wooden arm. Only in the beginning is this moving contraption seen, in all other shots the bride is actually flying around the room, over the tables. The effect is stunning. Many stories thrive off of unexplained, unscientific, elements that the characters themselves are oblivious too. The grenade exploding in the suitcase, the detaching island, the underwater scenes, etc…

The movie is LONG. The scenes are madcap.  The cinematography is spectacular. The music is exceptional, infectious and crawls farther and farther into your skull edging you on to some conclusion — simply put, either you love it or hate it. The movie is also heart wrenching (perhaps the symbolism is occasionally heavy handed) while being astoundingly funny — a dichotomy paramount for his message. It explores the joys of family, of love, and the terror of events and feelings (war, lust) that might seem out of an individual’s control. A cinematic masterpiece.

One thought on “A Film Rumination: Underground, Emir Kusturica (1995)”