1. This looks like a splendid New Worlds Quarterly anthology replete with book reviews, articles, and interior art by John Clute and James Cawthorn. When I review it (hopefully soon), I’ll include a few examples of the art. The quantity of authors I’ve not read in this anthology is high—for example, A.A. Attanasio, Harvey Jacobs, Rachel Pollack, among many others. See content lists below.

2. Gene Wolfe’s novels are a major hole in my SFF knowledge. Here is an early fantasy work that I might in the near future. I tend to take perambulatory paths before tackling an author’s great works. Thoughts on this lesser known one?

3. It’s been a while since I raved about Josephine Saxton’s delightful The Hieros Gamos of Sam and An Smith (1969). An author I must return to…. 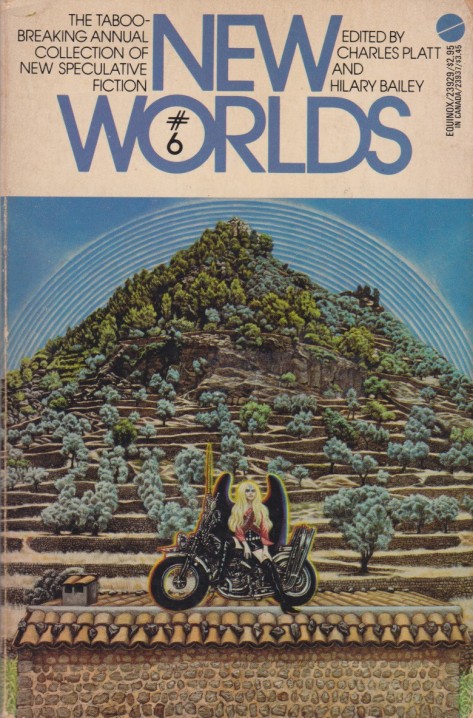 (Mati Klarwein’s cover for the 1975 edition)

From the back cover: “At the forefront of contemporary SF writing stands the controversial NEW WORLDS series. As a monthly British magazine, NEW WORLDS was banned by South Africa, Australia, and many British newsdealers because of alleged obscenity. At the same time, praise from such distinguished writers as Angus Wilson, Anthony Burgess, and J.B. Priestley helped NEW WORLDS win a major award for literary excellence for three years in a row.

This Equinox edition, like its predecessor, NEW WORLDS #5, affords discriminating American readers an opportunity to discover the qualities that gave NEW WORLDS its reputation as Britain’s most adventurous, exuberant, and uncompromising publication of new short fiction. Here are twenty-four vivid, thought-provoking, totally original visions by brilliant young writers whose prose and ideas herald the future of science fiction—and, indeed, of mankind.”

From the back cover: “Deep in a forest wilderness lay a village so humble, so insignificant, that only a handful of people knew it existed. Yet it was here that a mighty battle was waged in the endless struggle between Good and Evil.

Led by Fate into the timeless struggle were:

WAT: the savage, and charming, highwayman;

BARROW MAN: the awesome spirit of a long-dead but still worshipped warrior.

And there was Mark, not yet totally seduced by Evil; not yet totally convinced by Good. As he confronts his own conflicts, Mark forces each of us to explore our own vulnerability to Evil.

THE DEVIL IN A FOREST is a fantasy—a fantasy about the reality that we all must face sometime in our lives.” 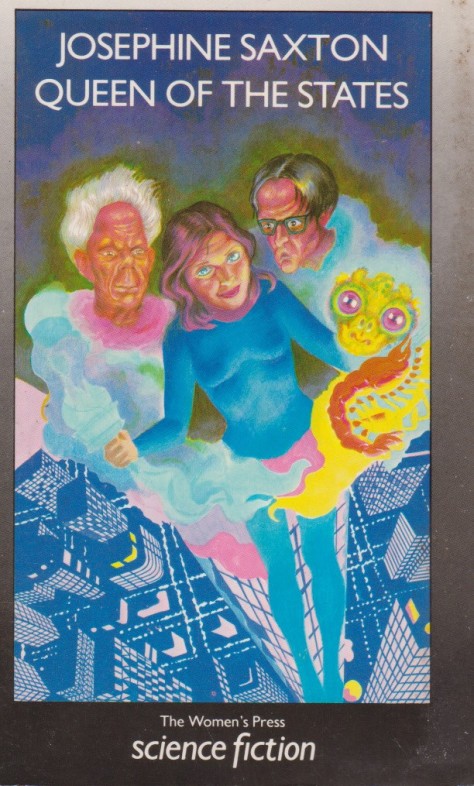 From the back cover: “Queen of the States is about Magdalen, a woman who is on her own planet, out to lunch and on her own trip. She moves through time and space, from a private mental hospital to an alien spaceship where she is interrogated about human behavior and the function of sex. Is Magdalen mad, or have the aliens really landed? She weaves her way through the fantasies of those around her—husband Clive, psychiatrist Dr. Murgatroyd, lovers, friends and friends’ lovers—until, finally, she can reclaim her own existence.”

From the back cover: “The Visionary Chronicle of the Ultimate Struggle to Rule Earth. Ten centuries after the Old Time ended when Earth’s cities melted in the War of a Thousand Suns. Now the lethal high technology of the Amtrack Federation’s underground stronghold is unleashed on Earth’s other survivors—the surface-dwelling Mutes. But the primitive Mutes possess ancient powers greater than any machine….”