Preliminary note: This is the fourth post in a series of vintage generation ship short fiction reviews. All of the stories I’ll review are available online. You are welcome to read and discuss along with me as I explore humanity’s visions of generational voyage. And thanks go out to all who have joined already!

Next up: J. G. Ballard’s “Thirteen to Centaurus” in the April 1962 issue of Amazing Stories, ed. Cele Goldsmith (link).

Previously: Judith Merril’s “Wish Upon a Star” in the December 1958 issue of The Magazine of Fantasy and Science Fiction, ed. Robert P. Mills 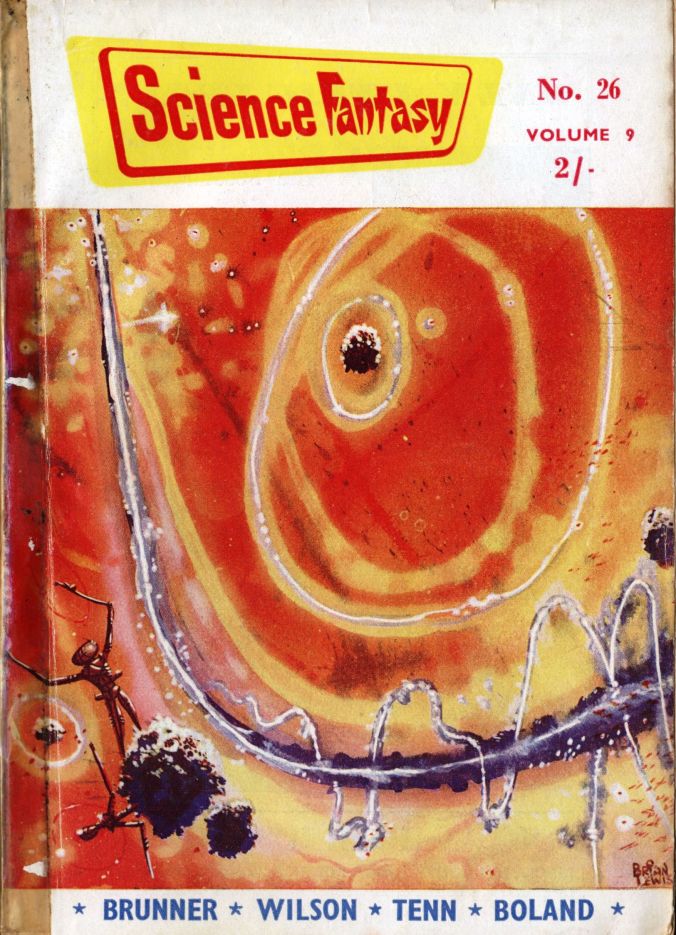 Our generation ship short story series continues with a gem! John Brunner’s “Lungfish” (1957) appeared in the December 1957 issue of Science Fantasy, ed. John Cornell. It also appeared in the 1972 collection Entry to Elsewhen which I reviewed back in 2010. “Lungfish” was the only worthwhile story in the collection and I was eager to give it a reread!

Highly recommended. I look forward to your discussion.

First, metaphoric bookends: a primordial fish (the “Lungfish” replete with primitive structures) cannot comprehend the immensity of the Earth’s vast skies when stranded on a muddy beach…. Yet, many epoch later, a fish walks on the same muddy shores.

Brunner posits a similar, highly compressed, evolutionary vista (evolution via psychological rather than biological processes) with humankind. A generation ship, designed for two generations, sets off for an alien planet. As Trip’s End approaches, the population includes 2,149 people where only 250 are from the original crew. Brunner includes lots of small details about life and the mechanics of survival (bacterial cultures, hydroponics, etc.) that add a sheen of “manufactured realism” to the story. The story follows the Head of Ecology, Yerring, as he detects a growing antagonism between generations:

“What made it that way? The tripborn’s knowledge that it was with them that the future lay? That the earthborn in the ship were condemned to spend their lives in space, perhaps living long enough to see Earth again before they died—perhaps not—while they, the tripborn, would go on to plant the first human colony under an alien sun? (5)”

The earthborn have projected all their hopes and dreams on the tripborn yet resentment and a disturbing transformation simmers below the surface. While the “old idealism” bubbles up within the earthborn at the approaching Trip’s End (19), the tripborn remain taciturn and passive. Tsien, the ship psychologist, and his predecessor had implemented a plan to focus the tripborn on their goals:

“Every mass entertainment we’ve put out during the voyage, every programme of tuition in the school, every talk ad every briefing—they’ve all been slanted towards the resumption of planetside life. That’s why we’ve refused to permit the germination of any culture with a shipside background; we’ve take n special note of people with originality and qualities of leadership and diverted their aims, in case they made too great an impression on their fellows” (21).

Despite the psychological program (perhaps a product of the program), the tripborn resent their elders. Like the primordial fish stranded on the beach, they do not comprehend the immensity of their position—the ocean and its warm bubbling womb-like waters seductively beckons.

“Lungfish” and Brian Aldiss’ Non-Stop (variant: Starship) (1958) spurred my love of the generation ship story. While I had previously read Heinlein’s influential Orphans of the Sky (fix-up 1963), Aldiss and Brunner suggested far more complex psychological and tonal variations on the theme. The choked vegetation in Non-Stop serves as a metaphoric manifestation of the obfuscation and loss of knowledge of the outside world—a return to the primitive. Brunner suggests a less sinister but equally unsettling vision of generational transformation—the second generation has always known the goal of the mission, they have been psychologically propelled via their education and position on the ship to think only of their purpose to conquer an alien planet, yet at Trip’s End all the work and planning appears to be for naught–they refuse to leave the ship.

Why does Brunner dwell on the gulf between the generations? By the late 1950s the Cold War was an increasingly terrifying reality. I suspect the old generation, those who had fought and won WWII, imagined a future far different. It’s hard not to read the story as a parable of the dissolution and fragmentation of post-WWII/50s idealism. However, I find it fascinating that Brunner’s resolution of the story benefits both generations and suggests future transformations of the Tripborn will occur.

In distinctly non-50s fashion, Brunner posits a future where women and minorities are in positions of power: Captain Magda Gomez leads the expedition, Philippa Vautra heads the medical department, and Lola Kathodos heads engineering. This would pass the Bechdel test as female characters talk to female characters about the problems on the ship rather than romantic entanglements.

John Brunner’s psychological complex vision with its metaphoric concision is my favorite of the read-through so far—and remains in the top tier of generation ship short stories I’ve consumed. I wish he turned this premise into a novel!

* Most of my exploration of John Brunner’s extensive selection of novels (especially his masterpieces) occurred pre-blog.  The Whole Man (1964) is often considered the turning point in Brunner’s novels (although he churned out plenty of complete crud afterwards)—I thought it was solid although the specifics have faded from memory. Since 2010 I’ve read and enjoyed The Jagged Orbit (1969) (never reviewed) and reviewed the following lesser works: 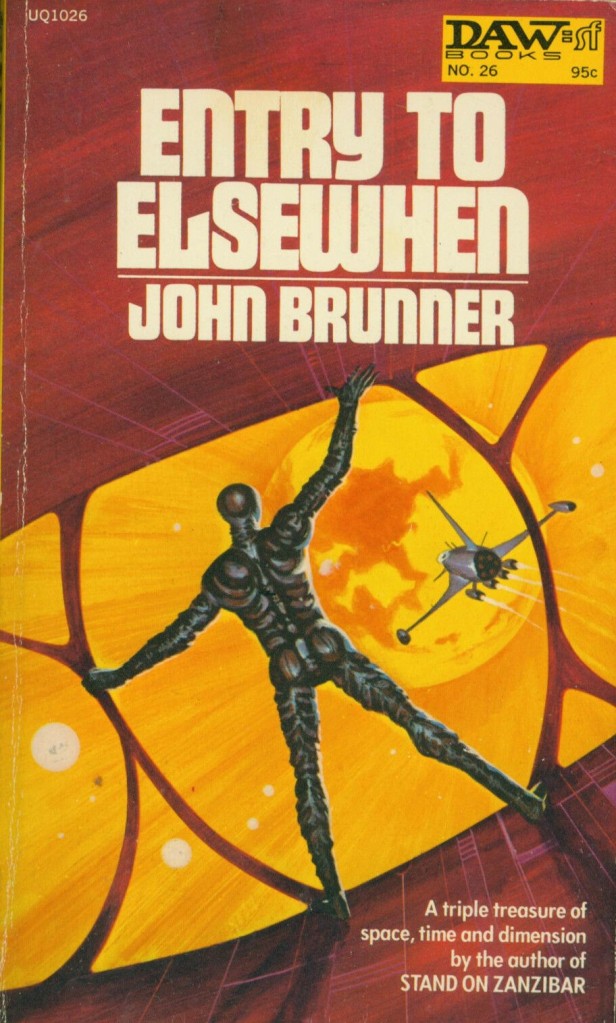 (Jack Gaughan’s cover for the 1st edition of Entry to Elsewhen (1972), John Brunner) 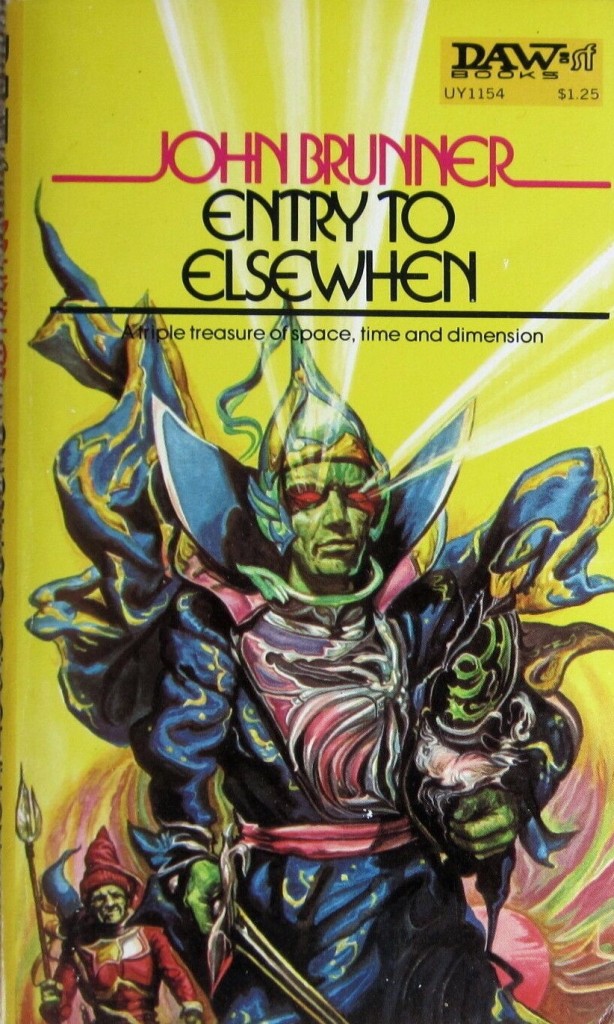