1. James Tiptree, Jr.’s first novel is not considered one of her better works. But, as my appreciation of her fiction grows, it was hard to pass up (especially at $1). Have you read it?

2. I recently read and reviewed World’s Best Science Fiction: 1967 (1967), ed. Terry Carr and Donald A. Wollheim and was thoroughly impressed. Enough to track down the following year’s anthology….  And, as an avowed D. G. Compton fan (for example, his underrated/underread 1966 novel Farewell, Earth’s Bliss), I was thrilled to see this volume contains one of his few short stories. It also contains the original novella version of one of my favorite SF novels–Robert Silverberg’s Hawksbill Station (1968).

3. A novel by Elizabeth A. Lynn, an author I’ve never read — I approach it with trepidation… But, as I always say, I love exploring lesser known works.

4. Peter Carey, another author I’ve never read. His stories (the publisher attempts to distance them from SF) seem my cup of tea. 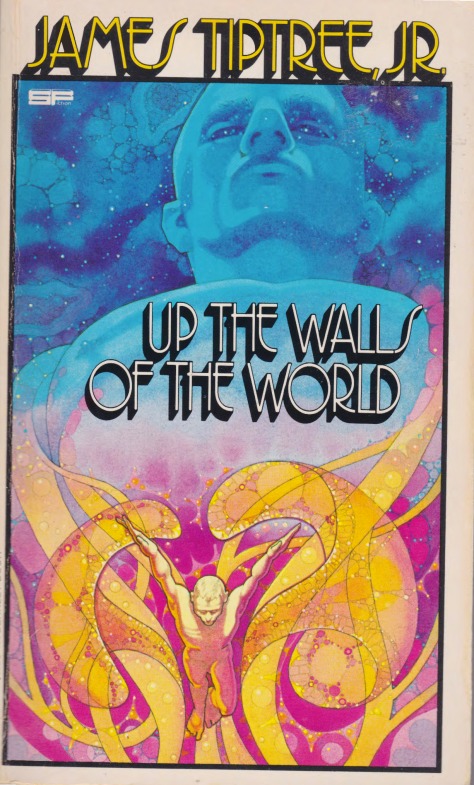 (Uncredited cover for the 1979 edition) END_OF_DOCUMENT_TOKEN_TO_BE_REPLACED

Everyone likes lists!  And I do too….  This is an opportunity to collate some of my favorite (and least favorite) novels and shorter SF works I read this year.  Last year I discovered Barry N. Malzberg and this year I was seduced by…. Well, read and find out.

1. We Who Are About To…, Joanna Russ (1976): A scathing, and underread, literary SF novel by one of the more important feminist SF writers of the 70s (of The Female Man fame).

2. A Funeral for the Eyes of Fire, Michael Bishop (1975): A well-written anthropological clash of cultures novel.  Slow, gorgeous, emotionally engaging….

(Diane and Leo Dillon’s cover for the 1970 edition)

D. G. Compton has long been one of my favorite SF authors.  Regrettably, his readership remains small and he has ceased publishing SF.  Novels like The Continuous Katherine Mortenhoe (variant title: The Unsleeping Eye) (1973) and Synthajoy (1968) are first rate masterworks with Farewell, Earth’s Bliss (1966) and The Steel Crocodile (1970) close behind.  All of his works have a distinctly English feel with solid, and occasionally beautiful, prose.

Chronocules (1970), with its outrageous variant title Hot Wireless Sets, Aspirin Tablets, the Sandpaper Sides of Used Matchboxes, and Something that END_OF_DOCUMENT_TOKEN_TO_BE_REPLACED

Please visit them, comment on their reviews, and browse through their back catalogues.

1] Speculiction….: An under visited /commented on blog with quality book reviews of classic science fiction — however, the reviewer, Jesse, is limited by the lack of older science fiction available to him in Poland.  I especially enjoyed his reviews of Ballard’s “beautifully strange enigma” that is The Crystal World (1966) and of course, my favorite science fiction novel of all time, John Brunner’s magisterial Stand on Zanzibar (1968).  An index of his reviews can be found here.  He also has a good mix of newer science fiction reviews as well.

2] The PorPor Books Blog: SF and Fantasy Books 1968-1988: I find this blog END_OF_DOCUMENT_TOKEN_TO_BE_REPLACED

(*some spoilers due to the limited nature of the plot*)

Another D. G. Compton novel, another wonderful (and terrifying) experience…  The only one of his novels so far that has failed to hold my interest was The Missionaries (1971), a lackluster satire on religion.  The Continuous Katherine Mortenhoe (variant title: The Unsleeping Eye) (1973) is a masterpiece and Farewell, Earth’s Bliss (1966) and Synthajoy (1968) are close behind.

Farewell, Earth’s Bliss is best described as a character study of a group of convicts sent to Mars and their attempts to integrate into an incredibly repressive and conservative society (derived in part to to the extreme dangers of the Martian environment) — in short, a piece of race and religion themed social science fiction.  Be warned, there  is little to no action.  As with most of Compton’s works, near future environments are the perfect vehicle for societal ruminations END_OF_DOCUMENT_TOKEN_TO_BE_REPLACED

(Don Sibley’s cover for the November 1950 issue of Galaxy)

When we conjure the image of a 40s/50s science fiction pulp heroine we often imagine a character who has to be rescued by men from aliens, shrieks and clings to any man nearby, and is always in a state of undress.  I’ve included one cover, for the sake of comparison, that I find to be an exemplar of this type of sexist (and racist) depiction below (Alex Schomburg’s cover for the January 1954 issue of Future Science Fiction): white woman wrapped in only a towel stalked by an evil alien obviously painted with African-American facial characteristics (heavy on the sexual predation vibe) — the reader is supposed to buy into the racial stereotypes and thus be titillated by the fear she must feel.

I’ve selected a wide range of mostly pulp magazine covers depicting spacewomen of the future (I’ve loosely decided that this means women in space, in spacesuits) that tend to buck the trend END_OF_DOCUMENT_TOKEN_TO_BE_REPLACED

Books and short story collections from three of my favorite science fiction authors — Barry N. Malzberg, D. G. Compton, and Robert Silverberg…  A review of Malzberg’s masterpiece Revelations (1972) — almost as good as Beyond Apollo (1972) — is forthcoming.

I’ve recently discovered Marx Books — an online bookstore run by a retired professor (at Texas Tech University) and avid science fiction collector.  His collection is substantial and most importantly, he only bills you for the exact shipping (not sure if he ships internationally).  So, no $3.99 a book as Amazon does!  Instead, $3 shipping total for seven books!  Because Malzberg novels, and his short story collections, are so hard to find in used book stores it’s always nice to know I can pick up a copy quite cheaply online.

Another Richard Powers cover for my collection….

(Uncredited cover for the 1972 edition)

From the back cover of the 1977 edition: “REVELATIONS is END_OF_DOCUMENT_TOKEN_TO_BE_REPLACED