1. There are a handful of famous SF authors whose work I haven’t read since my late teens/very early twenties–Joe Haldeman is one of them. Mindbridge (1976) looks intriguing–and I always enjoy finding a UK edition replete with a fun Josh Kirby cover….

2. I finished Tanith Lee’s Don’t Bite the Sun (1976) over my vacation in Mexico City–I’ll have a review up soon. Here’s the second of her SF novels I’ve acquired. If there’s a theme to this post (2 of the 4 novels) it’s portrayals of physical disbility in SF.

3. I’ve never read anything by Garry Kilworth. This late 80s work would normally not be in my sights but I have a fascination with sculpted worlds. See my recent review of Colin Greenland’s Daybreak on a Different Mountain (1984) and John Crowley’s The Deep (1975).

4. The second of K. W. Jeter’s novels with Laser Books. The Dreamfields (1976) looks like an exercise in extreme paranoia! Count me in.

Note: scans are from my person copies (other than Tanith Lee’s Electric Forest as my copy is in tatters). Click to enlarge.

Let me know your thoughts on the novels and covers + SF tangents in the comments!

From the back cover: “A dazzling epic of the far future from the author of the Forever War.

When sensors detect the presence of alien intelligence in the region of the star Achernar, a team of “Tamers” is sent to investigate. They are never seen again.

Another small team, the elite of the Tamer Agency, is ordered out, primed with every defensive and offensive weapon the technology of Earth can devise.

What they find looks harmless enough at first, but develops into the most hideous confrontation mankind will ever have to endure.”

From the inside flap: “Children were the most overtly cruel. They would chase after her, gleefully screaming taunts… pulling at her hair, jabbing her with small, sharp obkects, pinching or tripping her, so that she would have to scramble awkwardly and painfully to her feet again. But the childen weren’t her only tormenters. Strangers on the street would stop and stare, or lok away until she had passed, or change their course to avoid brushing against her.

For Magdala Cled was horribly disfigured–a human monstrostiy forced to live in a society of regular features and well-formed bodies. On Indigo, her home world, as on all the planets of the Earth Conclave, foetal conception was supposed to be the constrolled result of selective artificial impregnation. It was an excellent way to ensure that all children were born healthy and at least resonably attractive. Magdala, however, had been conceived biologically… an error in contraception which her mother, a licensed prostitute intent on trade, had been too busy to correct with an abortion.

Dumped on the State at birth, Magdala had grown up surrounded by people who hated and feared her, or at best ignored her. Yet she survived, hiding her pain and fury from those who caused it and, when possible, even hiding it from herself.” 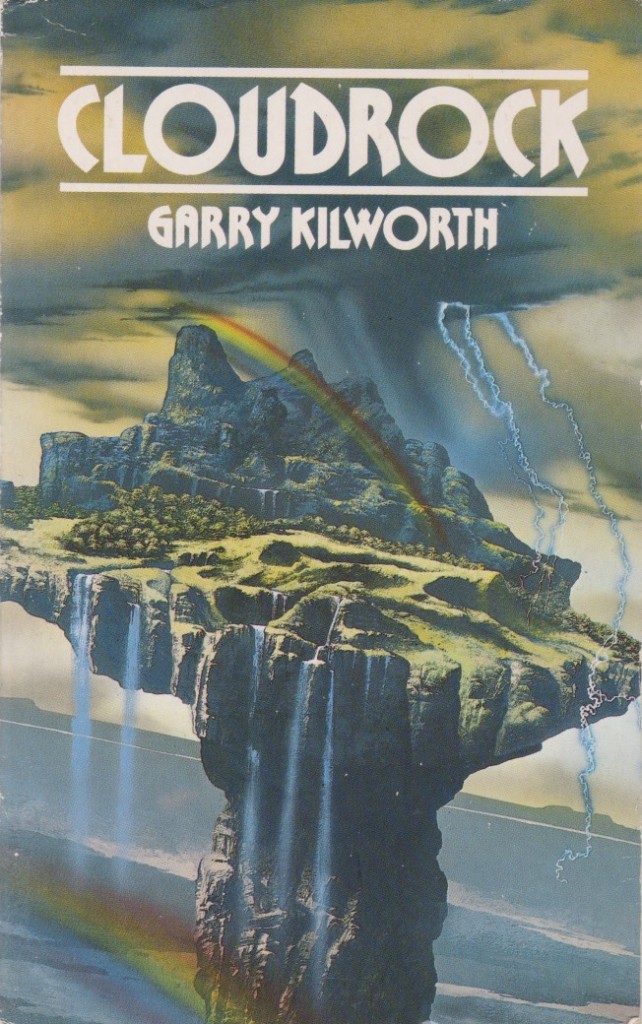 From the back cover: “On Cloudrock the penalty for imperfection is death: death by the long fall into the void, through the poisonous mists and gases that rise from the deadlands far, far below.

The two tribes who survive the Rock, the tribes of Day and Night, keep their families tight, their bloodlines pure and true, by incest, by cannibalism and by murder. Parcelling out their tiny world in measures of light and time, they wrap themselves in ritual and taboo, each family denying the presence of the other.

THEN CAME THE SHADOW: born to the matriarch Catrunner, the Shadow is deformed–a neuter dwarf–a natural candidate for instant death. But for this mutate, fate intervenes. The Shadow may live–on the condition that none acknowledge its presence: one word, one glance, and the Shadow will join his luckless kin in the long death-flight.

Surviving on the outskirts of the family, the Shadow’s very existence creates an unspoken question that challenes the ties that bind.

This is the Shadow’s tale…”

From the back cover: “What is Operation Dreamwatch? Why is a group of severely disturbed teenagers kept in a comatose state in a heavily guarded and isolated military base? The official explanation given to Ralk Metric and his fellow dream watchers is that these children are undergoing psychotherapy through the control and observation of their dreams. But Ralk begins to suspect a more sinister purpose. Gradually, he discovers the horrifying truth and understands the deadly purpose for his own nightly vigil in The Dreamfields.