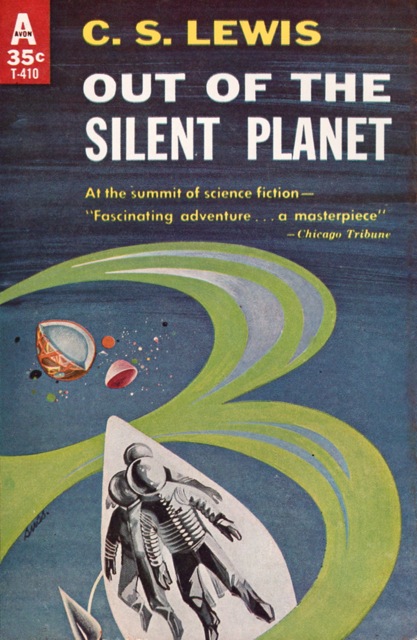 Art Sussman produced a remarkable corpus of SF and other pulp covers (mysteries, crime, etc). He could easily shift gears between Richard Powers-esque surrealism—although distinctly his own take—to covers that suited an Agatha Christie mystery (browse the range here). I would be wary comparing him to Powers until you skim through the latter’s late 50s early 60s art (definitely an enjoyable activity!). Although Powers is still far superior, both were part of the SF art movement increasingly experimented with surreal/metaphoric and experimental art (there are still spaceships lurking around the edges, and futuristic cities, and other pulpy moments).

There is a precision of vision with Sussman’s art—his cover for the 1960 edition of Out of Silent Planet (1938), C. S. Lewis places the astronauts in an outline of a vessel with strange hints at alien planets and experiences scattered gem-like in the distance. Sussman’s focus on the human form — often surrounded by surreal forms and humanlike membranes — showcases agony and despair. A great example (and my favorite of the bunch) pairs jagged black fields with a bloodied man, the 1960 END_OF_DOCUMENT_TOKEN_TO_BE_REPLACED

“I think the 60s and 70s were probably one the most creatively interesting periods for everyone. Art, music, film all pushing the envelope. New York City was affordable and fun, fertile in its influences. Book cover art, book jacket art was fun concept art, a bit more free than other illustration work” — Emanuel Schongut

Back on May 19th, I showcased Emanuel Schongut’s 1960s SF covers [link].  His nephew found my post and put me in touch.   Over the last few weeks I have had a wonderful discussion via email about his time creating covers for Doubleday under the direction of Margo Herr (art director + cover illustrator/artist).  Emanuel graciously agreed to a short interview.  He gives a behind-the-scenes look at SF cover illustrating in the 60s/70s, reflects on his own career, and discusses his artistic process.  If you have any questions, I will be more than happy to relay them to the artist.

Also included after the interview is a delightful selection of his 1970s covers–a double post!  I also recommend visiting his online portfolio for his more recent non-SF work.

Note: I have made only minor edits for clarity and inserted publication dates where necessary.

Thank you so much for agreeing to do an interview on your 60s/70s science fiction covers.  Over more than two decades  of producing SF covers for Doubleday, you put together an impressive body of work. They graced novels by some of the most esteemed authors of the genre, including Kate Wilhelm, John Brunner, Clifford D. Simak, Robert Silverberg, Keith Laumer, among others.

1) First, can you say a little about yourself.

Thank you for your interest Joachim.

END_OF_DOCUMENT_TOKEN_TO_BE_REPLACED

Max Ernst (1891-1976) has long been one of my favorite artists.  I had no idea, until browsing through the Penguin SF cover images from the 60s, that his art appeared on a variety of SF/F novels and related literature/nonfiction….  Yes, I had seen the memorable cover for J. G. Ballard’s The Crystal World (1966) [below] but I had not put the two together.

My favorite is without a doubt the use of Ernst’s awe-inspiring Europe After the Rain II (1940-42) for J. G. Ballard’s collection of stories, Memories of the Space Age (1988).  The malaise generated by his landscapes of decay combined with the sheer power of Ballard’s visions evoke are almost palpable shudders of joy…

There are a handful more but I have included most of the 50s to early 80s examples.

And today, April 2nd, is Max Ernst’s birthday!  So, share, if you are so inclined, your favorite of his works of art.  And, feel free to identify any that might appear on the covers below…  Too bad more publishers don’t latch onto the joy that are his collages (do a google search and you will understand).

(Max Ernst, Europe After the Rain, cover for the 1988 edition of J. G. Ballard’s Memories of the Space Age, 1988) END_OF_DOCUMENT_TOKEN_TO_BE_REPLACED

Thanks to my frequent commentator Peter S, I followed up on his suggestion to take a peek at Jack Gaughan’s 1969 cover for the Walker & Co. edition of James White’s All Judgement Fled (1968)—and was blown away by some of the other works in his art sequence for the press.

Many of these covers have wrap-around illustrations.  If you have one at home I’d love to see a photo of what the back looks like! (post in comments).

Damon Knight’s Orbit anthology series ran from 1966-1976.  A while back I reviewed Orbit 8 (1970)–which contained the brilliant Gardner Dozois “Horse of Air” (1970 and a selection of intriguing Wolfe and Lafferty short stories—and was impressed enough to snatch up a copy of Orbit 1 (1966).  And it is graced with a Richard Powers cover I had not seen…

Finally, a famous (“Joachim Boaz you will adore it”) fix-up novel by Keith Roberts enters my collection….

Overpopulation SF never gets old—even if I have low expectations about this one.

More Pangborn and a singleton Cherryh novel I had never heard of….

(Diane and Leo Dillon’s cover for the 1968 edition) END_OF_DOCUMENT_TOKEN_TO_BE_REPLACED

With the sole novel of his I’ve read, What Entropy Means to Me (1972), George Alec Effinger has entered the pantheon of my favorite authors—the novel is that brilliant.  So, with a birthday gift card from my sister I procured a copy of Irrational Numbers (1975), a collection of short fiction.  Will read soon….

I know very little about John Varley’s work.  I have a copy of his collection The Persistence of Vision (1978)  but had no idea that his first novel, The Ophiuchi Hotline (1977) was as well known as the Goodreads ratings make it out to be (1,476 votes!).  I am positive that Boris Vallejo’s horrid cover prevented me from even considering the novel in the past.

All first edition hardbacks for a mere $1-2 each.

Also, I have a love hate relationship with Blish (love his “hard” SF and dislike his juveniles of which he wrote a many and often in a “hard” SF series)—The Frozen Year (1957) supposedly is his attempt at a “realistic” SF novel.  I’ll just have to see…  I feel weirdly compelled to read it.

As for the Karen Joy Fowler collection—yes, she wrote in the 80s!—the book sorters at the Half Price Books failed to realized that it was a signed copy!  So for a mere dollar I now have only my second signed SF work after D. G. Compton’s Scudder’s Game (1988).  As people have probably realized, I completely eschew conventions and have little connection with fandom and thus do not go out of my way to procure signed editions…

Michael Bishp=one of my new favorite authors (after reading Beneath the Shattered Moons and A Funeral for the Eyes of Fire).  Hence, Catacomb Years (1979) is a welcome addition to my collection.

(Uncredited cover for the 1965 edition) END_OF_DOCUMENT_TOKEN_TO_BE_REPLACED

MPorcius, a frequent and well-read commentator on my site, has started transferring his numerous amazon reviews and writing new reviews of classic SF (a substantial portion is pre-1980s) to his blog.  Please visit him and comment on his posts!

queue rant: I’ve noticed a surprising lack of frequently updated classic SF blogs online.  Yes, many bloggers occasionally dabble in the distant era of SF glory or publish yet another review of the obligatory masterpieces because they appear on a some “best of” list (Dune, The Left Hand of Darkness, etc).  However, few are devoted to the period and make it a point to write reviews of books that very few people will ever actually read due to their obscurity i.e. blogs that don’t sell out by churning out reviews of new Tor releases (I have declined their offer) or endless 4/5 or 5/5 starred let’s pat each other on the back reviews of self-published (and generally awful) ebooks END_OF_DOCUMENT_TOKEN_TO_BE_REPLACED