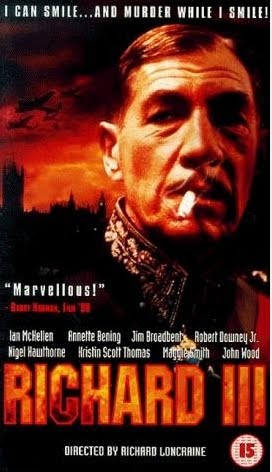 Richard Loncraine’s Richard III is an inventive adaptation of Shakespeare’s famous play by the same name.  Instead of a late medieval setting, we’re greeted with an industrial, 1920s-1940s aesthetic (beautiful cars, haunting smoke stacks, bleak factories etc).  England itself has been transformed into a Fascist state (the emblems, the flags, the uniforms).

I’ve always been receptive to unusual adaptations of Shakespeares works (Titus, for example) — I feel that Shakespeare’s plots, characters, and themes are so archetypal that they function in just about any setting.  In this case, much of the original plays has been modified and manipulated for cinema.  Purists will obviously be bothered by the drastic reconceptualization.  However, this is an visually fascinating, extraordinarily well-acted (the all-star cast lives up to the billing), and visceral experience.

I suspect most of you are familiar with the plot of Shakespeare’s play.  But if you’re not, here’s a brief recap.  The evil Richard (Ian Mckellen at his best) desires the throne above all else.  Along with his various henchmen, he slowly has his rivals murdered (including two of his young nephews whom he had sequestered in the tower) and schemes and double crosses and, unsurprisingly, dies in battle.

If there’s a flaw in the film, it’s the magnificent beginning sequence: the quiet, then the deep breaths, the soldiers with gas masks, the tank crashing through the wall, the the fatal gun shot…  None of the following scene live up to the shocking beginning.  The film ends on a somewhat rushed note.  I feel that the battle sequence could have been played out a tad bit more….

My favorite aspect of the film is above all the re-imagined setting.  This definitely gives the film an unusual feel.  One does not imagine a strange Fascist alternative England where the people speak the lines of Shakespeare.  The uncanny feeling is perfectly matched by the dark undertones and the extreme sadistic edge of Richard.  The scene where Lady Anne (Kristin Scott Thomas) enters the hospital morgue and cries over husband’s body only to be wooed by a few moments later by her husband’s murderer Richard sums up the experience…  writhing undercurrents of dread.  Everything combines perfectly — Richard III shines through in all his dark glory. 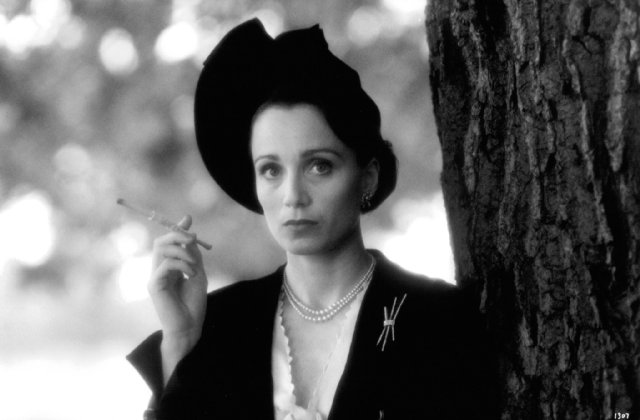 I recommend Richard III even for those who are uncomfortable with a re-imagined/manipulated Shakespeare since it functions as a film rather than a spruced up theater production. It is a truly wonderful experience….

I wish it was 30 minutes longer…