Some fun recent purchases (online and used bookstores in Chicago)!  I saw the potential in Kate Wilhelm’s first collection of SF, The Mile-Long Spaceship (1963) so I tracked down a first edition of her second collection, The Downstairs Room and Other Speculative Fiction (1968) — I have high hopes.

I’ve found Josephine Saxton’s work hard to come by — her works were rarely reprinted.  The Hieros Gamos of Sam and An Smith (1969) was a fascinating SF infused allegory so I splurged a bit and procured Vector for Seven: The Weltanschauung of Mrs. Amelia Mortimer and Friends (1970).

I am less interested in the other two purchases — The Sign of the Mute Medusa (1977) by Ian Wallace was a dollar at the thrift store and has a great domed city on the cover.  I had previously read his massively disappointing Croyd (1967).  And the Theodore Sturgeon volume, A Touch of Strange (1958), contains some of his best known short works — hopefully it’s rather more satisfying than A Way Home (1956).

1. The Downstairs Room and Other Speculative Fiction, Kate Wilhelm (1968) (MY REVIEW)

From the inside flap of the first edition: “Come into the world of Kate Wilhelm — the very special world of Kate Wilhelm.  Fear inhabits every unlit corner; unreality and madness are constantly shifting shadows just beyond the next doorway.  Feel something waiting in “The Downstairs Room,” the title story of this unusual collection, as Very can feel it, reaching out to her; as she can feel it reaching into her life, into her mind, until, at last, she is touched by its purple shadow…

Observe the chic, sophisticated guests at “The Unbirthday Part.” Wellman was irresistibly drawn to the part by the sound of music and laughter, but, once in the apartment, he discovered that none o the guests knew the hosts, or even each other.  And then he made a truly horrifying discovery…

Envy “The Most Beautiful Woman in the World”, serene and loved and confident in the knowledge of her great beauty, until another world cruelly intrudes itself on her…

There are fourteen stories here and each one is an eloquent testimony to Kate Wilhelm’s talent and versatility.  She can move you to tears in “Sirloin and White Wine”; revulsion in “Baby, you were great”; or pity in “How Many Miles to Babylon”; as she examines, with subtle compassion, man’s fight for survival in a world that threatens to engulf him.”

2. Vector for Seven: The Weltanschauung of Mrs. Amelia Mortimer and Friends, Josephine Saxton (1970) 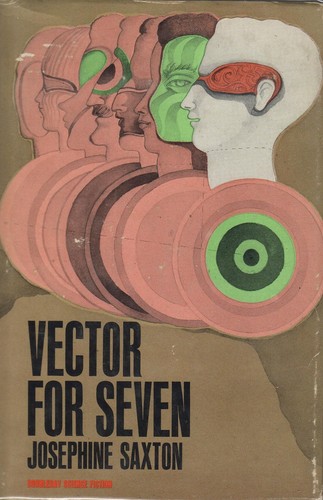 From the inside flap: “All of them had followed the explicit directions on the itinerary.  Obviously a mistake had been made.  A dusty and abandoned airfield was an impossible departure point.  As the first wave of panic swept over the pathetic little group, a luxurious auto-bus arrived with a driver guide.  They had not been deceived.  The first leg of their holiday was about to begin.

Unknown to them, however, they were about to embark on a journey that was to alter and challenge their very lives.

It was a strange group that had been drawn together by a newspaper advertisement promising new places and faces at a modest price.  There was the boy Septimus — alone, withdrawn, very nearly starving to death; Martha whose swarthy, gipsy beauty belied more than her age; while Sophia’s hard appearence hid her youth and disadain for life.  And it was obvious Amelia’s overly proper, matronly attitude was nothing but a pretense for a very dull widowhood.  The whitehaired gentleman, Edward, knew his first holiday would be his last, for death was close.  And Obidiah was Edward’s perfect antithesis — young, handsome, viril and uncaring.

As the trip progressed over land and sea, it became apparent that they were not on an ordinary holiday.  Through various experiences, both mental and physical, they found themselves confronted with the sham of their own lives.  Faced with their own deceits, they knew that no matter how painful, they were being offered the rarest of all options — a strange rebirth and renewal of life.

From the back cover: “One of Theodore Sturgeon’s basic and original collections of his most unforgettable novelettes and short stories is brought back to print with DAW’s new presentation of A Touch of Strange.  here are nine masterpieces of the imagination from the period of Sturgeon’s finest creativity.  Included here are Affair with a Green Monkey, The Other Celia, The Touch of Your Hand, ad more.  The name of Theodore Sturgeon is a magic word in the field of science fiction and fantasy — in A Touch of Strange you will find out for yourself ample reasons for this.”

From the back cover: “WELCOME TO PLANET TURQUOISE.  Where the marvels of technological progress have turned the seas to acid, and the air outside the great domed city to poisonous gas.  Where the affluent, exquisitely civilized ruling class has devised a program of population control that will leave only themselves alive.  Where a mysterious group of revels is somehow disturbed by all of the above — disturbed enough to launch a cunning and complex campaign of killing, kidnapping, impersonation, seduction and time-change.  Welcome to Planet Turquoise — where the most ingenious and incredibly exciting science fiction adventure of the year awaits you!”