I am not much of a “collector” but I am getting the collector’s itch after acquiring one of many amazing volumes in the SF from the USSR series from Collier (and Macmillan in hardback) books in the late 70s.  The Lehr covers!

And Geo Alec Effinger being Effinger… 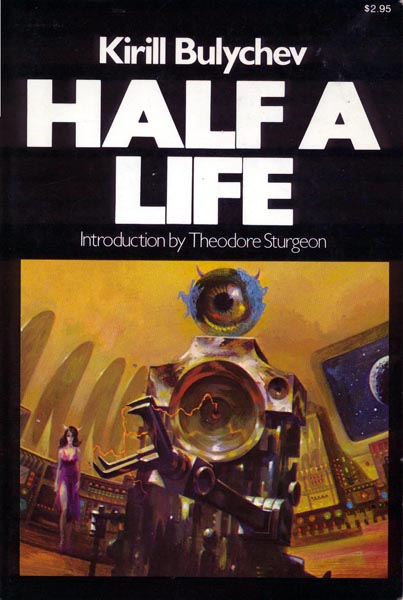 From inside page: “In these seven superbly executed stories—all shaped by the imaginative tweists, wry humor, and warmly human characters for which Kirill Bulychev’s work is well-known in the Soviet Union—American readers are lifted into a delightfully varied future where some very likable Earthlings suddenly find themselves in the most fantastic situations:

Half a Life: A Russian Woman abducted by aliens as a biological specimen teams up with strange captives from other worlds—objective: freedom…

I Was the First to Find You: A two-hundred-year-old space expedition finds the first evidence of intelligent life in outer space—with an ironic twist…

Protest: The trials and tribulations of the Galactic Olympics—when “fleeking” threatens interplanetary harmony…

May I Please Speak to Nina?: Twilight zone of time dislocation in modern Moscow—and a man’s thirty-year-old memories of war…

Snowmaiden: The rescue of a beautiful snowmaiden from her dying ship and the touching tale of an impossible love—kindled at -55° C…

First Layer of Memory: An experimental operation—cynic takes on nice guy—all in one man’s mind…”

From the inside flap: “In a last-ditch effort to liberate his beloved planet Ramses, a scientist in the twenty-third century develops a super-robot—one with a computer for a brain and a two-mile laser for an eye—that somehow destroys its inventor and programs itself to kill all life.

The universe is a strange and unimaginable.  Earth has colonized Venus, Mars and other planets in a series of devastating coups that have left civilizations scorched and populations decimated.  World Group Government keeps watch over an uneasy truce, but everywhere the contaminating greed of Earthmen is hated, their influence despised in a simmering passion that drives alien beings to quite human—superhuman—lengths.

Dr. Vianti, for example.  His native planet, rich in platinum ore, was summarily seized by the world Group, the mines taken over, and Vianti left with the task of speeding up production of a robot he had designed to do the work of twenty-five men in the mines.  Secretly, he worked on his own project.

When Trace, a Captain in the World Group Army, arrives on the scene, the killer robot has already succeeded in piloting a force-field and laser equipped sleet ship, destroying the entire city and threatening several small planets.  Trace and his crew chase the robot to an arid, desert planet, where a sinister and unexpected showdown occurs.  Suddenly Trace finds himself the sole survivor, pitted against an inhospitable planet and a computerized death machine on a rampage.  Weakened by the elements and the lack of food and water, Trace has just one advantage over the robot—imagination.  But is this enough to win his inexorable battle with THE KILLER THING?”

(David Heffernan’s cover for the 1982 edition)

From the back cover: “NO ONE EVER RETURNS FROM THE FARAWAY PLANET CALLED HOME.  When the bumbling idiots of the human race turned over their cares and woes to the infinitely superior mechanism of TECT, they clearly made a wise choice.

Take the case of Sandor Courane.  TECT offered to make him a college basketball star.  When it turned out he could barely dirbble, TECT gave him a second chance as a science-fiction writer.  And when no one bought his books, TECT offered him a comfortable job on the assembly line of a Japanese auto plant.

When Courane had the effrontery to flunk as a screw-turner, TECT was even kind enough to send him to a rehabilitation program on a lovely pastoral planet.

From the back cover: “New Angles on the Universe!  John Sladek is one of the most intelligent and versatile science fiction authors writing today.  With sharp insight and wicked humour he opens his readers’ minds to new angles on space, time, machines and men.  In this brilliantly entertaining collection you will encounter galactic spies, nightmarishly benevolent computers, some extremely peculiar aliens, offbeat time machines—not forgetting, of course, the Stream-Driven Boy itself…  In addition Sladek has included ten masterly parodies of the work of such all-time SF greats as Iclick As-i-move, Hitler I.E. Bonner, Barry DuBray, Carl Truhacker, Chipdip K. Kill and several others.  Read them—and experience a new high in outrage!”