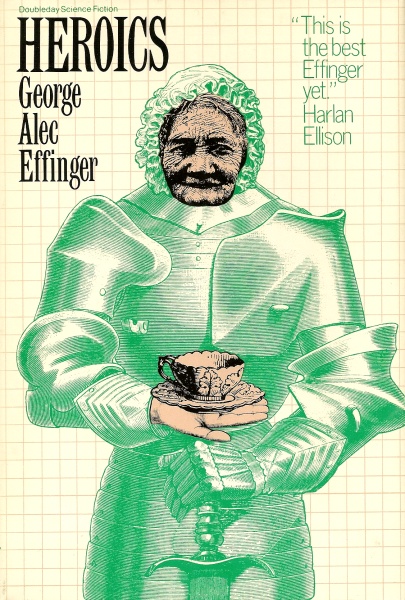 (Gary Friedman’s cover for the 1979 edition)

George Alec Effinger’s What Entropy Means to Me (1972), a complex and intense homage to the act of literary creation, ranks among my favorite SF novels.  Heroics (1979), a deconstruction of myth and heroic quest,  treads similar ground but in a more light-hearted manner.  The sheer intensity elevates the former while the latter’s sincere examination of old age and loneliness still strikes with elegiac power.  Both are highly recommended but What Entropy Means to Me or his short story collection Irrational Numbers (1976) might be the place to start…

Heroics (1979) transpires across a mythic landscape once called the United States.  But this is not the heroic adventure story you are expecting!  It is a strange landscape where the great prairie is covered with Teflon—“Teflon VII” (115) to be precise. A landscape where the once teaming masses have all but disappeared, most of the remnants live in houses that dot vast woods….  A world where “references to cities and their problems were difficult to comprehend,” and, “like dinosaurs; [cities] certainly had ruled the world at one time, but they were almost impossible to accept emotionally” (2).

The eighty-two-year-old Irene lives in one of these houses “in what had once been downtown Louisville” (2).  She views herself as a link to the world that was.  Michael, his wife, Constance and their daughter Alyse who allow her to live in the house think that Irene has “become slightly senile. Out of touch with her surroundings” but Irene was “caged in the house,” “she was caged in her body” (6).  Thus:

“She felt discontent. She felt forgotten, abandoned, futile. She felt like an atrophied organ in the body of the family, a useless appendage, a vestigial remnant of something that had once been meaningful and important” (12).

Despite the general lack of knowledge about the past world, Irene and others obsess about collecting what remains.  Alyse wants to collect stamps but does not know what they are or if they even exist anymore.  Michael collects “stones and pieces of metal with words on them” while Constance collects “pins, needles, nails, screws, bolts, and tacks, all items that had been made useless by progress” (13).

And Irene collects 20th-century glass.  Her collection, secreted away in her rooms, is the result of a seventy-year project inspired by a microfilm given to her in her youth.  After Alyse breaks a precious depression-era butter dish, Irene resolves, despite her eighty-two years, to trek to the mythic land of California to find another.

She encounters the magical Glorian, the same Glorian in What Entropy Means to Me, who proclaims that Irene has “begun a true quest, and you have to follow it through, no matter what happens.  I’m your Virgil, as it were, and we have a prescribed set of circumstances.  You’ll have dangers and threats and temptations, just as every hero does […]” (36).  Glorian claims to be sent by the Powers That Be and in the possession of Knowledge way beyond what Irene knows.  As with all heroic templates, there is always secret knowledge and just enough is dispensed to prod along the hero, the deities cannot do all the work!

Irene enters Hell where she meets a version of herself, Purgatory where she must save children from veering cars, the Battle of Maldon in tenth-century England, gender switches, body switches, Lewis and Clarke in her mind, and cities decorated with flamingos under the drains of the Teflon plain….

Simultaneously playful and melancholic, Effinger satirizes with a storyteller’s pizzaz the artificiality (its tropes and manifest destinies) of the genre of the heroic quest.  Irene is the last type of hero one would expect, and her quest to find a butter dish smacks of the most ridiculous premise conceivable in order to comment on the heroic genre.  Despite the reflexive intent, Heroics is still about heroics.  And our heroine is still a heroine—she abandons all that she knows and sets off in her old and infirm body, possessed by only her indefatigable spirit.

Reflection is not destruction.  It lays bare what we might all expect in ways that are unexpected.  George Alec Effinger might be one of the best SF writers to write about writing.  And by writing about Irene to comment on writing, Effinger has created what might be my favorite hero.