1 and 2. As a kid, I read and adored John Christopher’s Tripod Trilogy (1967-1968). Little did I know at the time the quantity of other SF novels—mostly of the post-apocalyptical sort—published over his long career. In 2012 I read,  reviewed, and enjoyed his post-apocalyptical satire The Long Winter (1962). And now, I have both his single most famous “cozy catastrophe” and a lesser known one… with a fantastic cover by Steve Crisp.

4. Ian Watson is a fascinating author. The stories in The Very Slow Time Machine (1979) should be tracked down. I also recommend The Jonah Kit (1975), which I never got around to reviewing…. this acquisition is a lesser known novel in his extensive oeuvre.

From the back cover: “WORLD-QUAKE!

There was a hush at the first shock, a silence that rang in the ears. The noise reached him with the second one, a bellowing that sounded as though the world was being torn from its orbit and sent grinding and slithering through space. From that point, the shocks were successive—lurch and roar, in a hideous phased rhythm…

After the earth convulsed, humanity began its slow, inexorable return to barbarism. Amid the eerie, diseased ruins of the cities, across the ravaged countryside, men and women found only pillage, rape, death and nameless cruelty—as they searched for some remnant of the life that had once been.”

From the back cover: “THE BIG HUNGER…

The Chung-Li virus destroyed all types of grass. Including rice, wheat, oats, barley—all the grain-bearing plants on which the world depended for its basic foodstuffs.

Millions died of starvation. Millions more died in the violent upheavals that this, the ultimate famine, brought in its wake. But there were people caught up in the nightmare who were determined to survive whatever the cost of their civilized values—values which were now as out of place as a dinner jacket in a slaughterhouse in any case…

John Christopher’s classic bestselling novel of a group of men and women fighting their way across a devastated landscape through rape, slaughter and pillage to a grim sanctuary is a relentlessly gripping story of survival against all odds in a world that has become a brutal hell on earth.”

(Michael Whelan’s cover for the 1982 edition)

From the back cover: “UNDER THE SIGN OF THE LOCUST…

In the dark hour of the Evening Cultures, Viriconium is plagued with discontent and vice, the Reborn Men roam the streets, and the sects of a new religion—the Sign of the Locust—are at war.

But now the Pastel City faces a more deadly challenge than its own dark battles. Swarms of giant locusts are descending from the clouds, seeking to make the world their home, releasing a cosmic force that transforms the air…

Now Lord Galen Hornwrack must lead a quest to the source of this mysterious evil… a quest that will take him to the very heart of darkness, to a realm beyond sanity and virtue—face to face with a most peculiar reality inside… A STORM OF WINGS.” 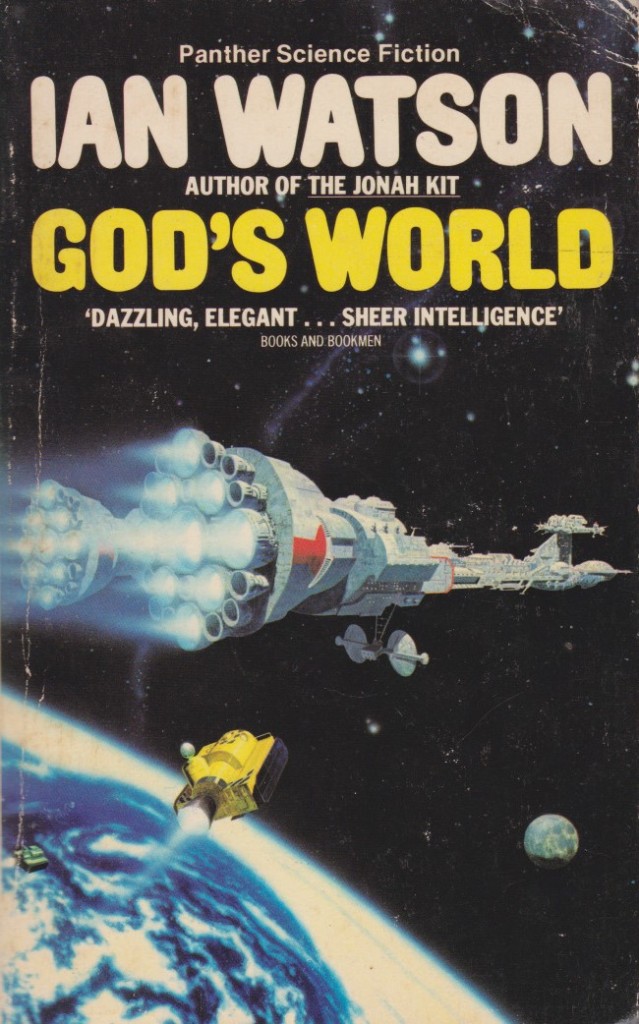 (David Jackson’s cover for the 1982 edition)

From the back cover: “IT IS 1997: TIME OF THE MILLENNIUM… Earth has been alerted by messengers of God and summoned to his planet of angels, 82 Eridani. Powered by a mysterious space drive found in the Gobi desert, a crusading space ship is launched through High Space to explore this heavenly world. In fear and wonder, Amy and her companions travel on a hallucinatory, mind-expanding voyage… fighting spectral foes, encountering revelatory visions, in a starship propelled by imagination… Then, in a series of dream contacts searingly, achingly real, Amy discovers the true identity of the alien inhabitants of God’s World… and Ian Watson illuminates his own shimmering new worlds of ideas.”