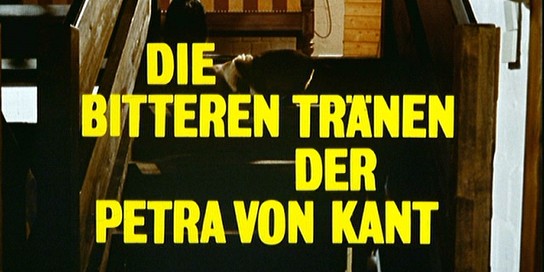 The Bitter Tears of Petra von Kant (1972) is by far my favorite Rainer Werner Fassbinder film I’ve seen and like all of his films, an acquired taste.  I’ve not always appreciated his works — I barely tolerated The Merchant of Four Seasons and managed to watch only half of The Marriage of Maria Braun (I did enjoy Veronika Voss). However, after re-watching The Bitter Tears for a second time with some friends and good German beer, my appreciation grew immensely.  Not only do Fassbinder’s films reinvent and explore a maligned “genre” of drama, the melodrama, but also focus on extraordinarily controversial subjects (at least for the 70s and 80s).  Along with Wim Wenders and Werner Herzog, Fassbinder was instrumental in revitalizing German cinema in the 70s.

Fassbinder himself is one of the most polarizing figures in modern cinema in part because of his personal life (forcing secretaries to be actresses, abuse towards women, drug use, troubled relationships with men and women, etc etc).  His frenetic pace to film making is astounding: in less than 15 years he produced 40 films (died at 37 from drug use)!

The Bitter Tears is an intensely disturbing and claustrophobic take on jealousy and manipulation. Fassbinder’s central theme pervasive in so many of his works–the delicate and often indistinguishable line between love and the desire to dominate the object of your love — is potently distilled in every scene.  This is heightened by the fact that the entire film takes place in a single room!  Two hours of cinema in a single room is a phenomenally difficult thing to pull off.  However, the weird trapping of the room (mannequins, odd costumes, paintings, colors, textures), the odd intensely theatrical acting style, adept cinematography, and the interesting (all manipulative and grasping) characters allow the one room setting to really concentrate Fassbinder’s plot and themes.

Petra von Kant is a successful fashion designer.  She’s caustic, domineering, and intensely egotistical.  Her “servant” Marlene never speaks and serves Petra von Kant’s every whim (Petra essentially treating her like a slave).  Petra’s cousin, Sidonie, introduces Petra to another woman, an aspiring designer names Karin whom Petra falls deeply in love with.  However, this relationship slowly unravels Petra’s life.  She is soon completely dominated by Karin whose motives are far from savory.  Petra is slowly driven into despair.  Although she eventually emerges from her malaise, a bizarre and ultimately emotionally wrenching revelation awaits.

The plot is simple melodrama yet its delivery and themes raise it above the run of the mill melodrama productions.  The strangely stilted (theatrical) dialogues, the extraordinarily long takes, the single room setting, are all initially frustrating.  However, we are sucked into the slow changes of character, the emotional swings of Petra.  We are transfixed by her sickly gaze (transformed by her frequent application of makeup), her unusual wigs, her costumes, the odd interactions between the characters.  Karin orders Petra around and Petra orders Marlene around.  Petra complains about Karin’s domineering and emotionally reserved nature and Petra in turn views Marlene as an object.

This film will NOT appeal to most audiences.  Perhaps even to fans of his other films.  Although I’ve not seen many of his other works, I found this one the most intense, unusual, and engrossing.  This is not a pleasant experience — we suffer with the characters despite the fact that none are “good people”.

7 thoughts on “A Film Rumination: The Bitter Tears of Petra von Kant, Fassbinder (1972)”