The 60s produced some of my favorite science fiction works.  Many authors moved away from the technologic naivete of pulp sci-fi and predicted less than positive futures (overpopulation, natural disaster, etc) and attempted to instill a more literary quality to their works.  I’ve cobbled together a top eleven list — I have probably forgotten a slew of amazing works that I read years ago.  Also, I read majority of them before I created my blog and hence do not have reviews — I’ve included a blurb for those without reviews.  I’ve linked those that do.  And, as I have promised before, a review of J. G. Ballard’s masterful The Drowned World (1962) is on the way!

EDIT: Over the course of reading the comments and glancing over my bookshelves I’ve discovered how much I’d forgotten had been written in the 60s (Vonnegut’s Cat’s Cradle, etc).  As a result, I’ll put together a more comprehensive top 20 or so in the near future.

EDIT: 06/26/2015: Because my post is receiving a substantial number of new visitors, I’ve decided to add a few novels I’ve read since I made the initial list three years ago.  Instead of a top 11 it’s now a top 15 in no particular order.

1. Stand on Zanzibar, John Brunner (1968) — is by far the best of the overpopulated world genre (for additional works consult my index).  Brunner chronicles a dystopian future society in obsessive and awe-inspiring detail with shreds of newspapers, advertising jingles, quotations from invented books, and even current (60s) events.  Be warned: low on plot, heavy on world building, experimental structure…

(Steele Savage’s cover for the 1969 edition)

2. The Left Hand of Darkness, Ursula Le Guin (1969) — The Left Hand of Darkness remains Le Guin’s best work.  Not only is she literary, but the political ramifications of the premise — androgynous humanoids who randomly become male or female for one month of the year — is unforced and fully realized (she invents mythologies, believable characters, and fascinating societies). 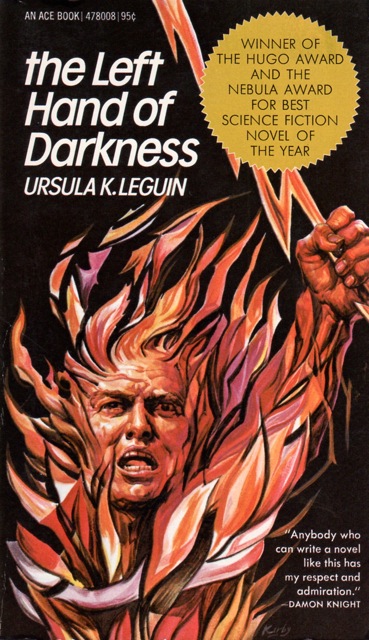 4. The Drowned World, J. G. Ballard (1962)  — The world is slowly submerging due to a solar flare, a retreat into a uterine state — a resigned fate.  Our “hero” hides from the world in the upper floors of a hotel with limited gasoline to power his airconditioner.  A strange man arrives in a casino vessel to collect relics of a past era and a pumping device to “excavate”  a submerged city… Beautiful.

(Leo Dillon and Diane Dillon’s cover or the 1968 edition)

(Don Punchatz cover for the 1969 edition)

7. Do Androids Dream of Electric Sheep?, Philip K. Dick (1968) — Philip K. Dick’s best.  There are millions of reviews on the web so I won’t go into any details.  But, there’s a scene I remember poignantly — a “chicken head” is “tortured” by androids slowly remove the legs of a spider.  Even the androids realize the strange sanctity of every life in a world mostly devoid of life — and use it for their advantage.  A deeply philosophical work worth pondering.  Bladerunner (a great movie in its own right) in an effort to titillate viewers transformed the android character of the opera singer in the strange scantily clad snake lady — PKD was interested in an android perfecting a human artform and contributing to society not a member of society’s criminal underbelly

(John Schoenherr’s cover for the 1967 edition)

9. The Man in an in a High Castle, Philip K. Dick (1962) — PKD has an uncanny ability to focus in on the banal and transform it into a deeply poignant and metaphoric moment, object, action.  It’s unlike any alternate history you’ll ever read — if American culture became the subject of only antiquarian interest…  Our everyman heroes create “american” pottery.  Read reviews and plot summaries online — I’ve only pinpointed a thematic element that particularly resonated with me.

(Richard Powers’ cover for the 1974 edition)

10. Solaris, Stanislaw Lem (1961) — I’ve had little exposure to non-English language sci-fi.  But, Lem’s vision is the epitome of thought-provoking first contact novel. A philosophical work ruminating ever so delightfully on nostalgia, the nature of sentience, memory, pseudo-science….  Lem’s His Master’s Voice (1983), on a similar subject might be a better novel….  Another “classic” with tons of plot info available on the web.

11. This Immortal, Roger Zelazny (1965) — Zelazny’s best work (yes, better than Lord of Light in my humble opinion) — tied Dune for the Hugo —  only in Zelazny’s world (perhaps Delany’s) would a man with mold growing on his face be the subject of a novel.  A post-apocalyptical vision of an Earth owned by aliens (for use it for tourism) filled with mutated lifeforms….

For all my book reviews ordered by rating consult the INDEX

For more articles/lists consult the INDEX