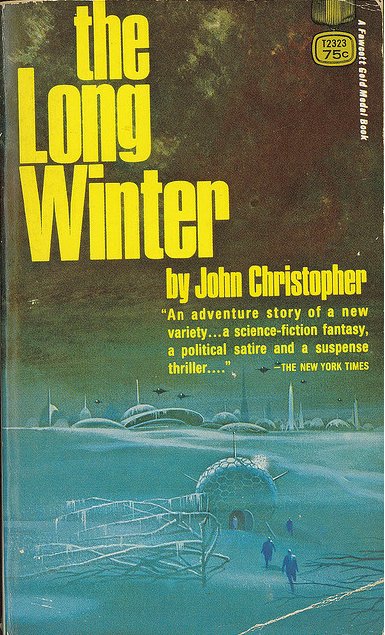 Although known for his famous young adult Tripod Trilogy (The White Mountains, The City of Gold and Lead, The Pool of Fire), John Christopher produced a substantial corpus of science fiction works for older readers — most notably, the post-apocalyptical tale No Blade of Grass (1956).  The Long Winter (1961), one of Christopher’s lesser known works, is on the surface another post-apocalyptical novel (or sorts).  However, the post-apocalyptical elements are subsumed by a bitting satire on colonial and post-colonial British attitudes towards their colonies.  The publication date of 1962 is of vital importance in understanding the work.  Nigeria gained its independence from the British in 1960, Ghana in 1957, and South  Africa in 1961.

A large percentage of the reviews I’ve read complain that they expected something entirely different.  In fact, they are mislead by publisher who claims the work is “a terrorizing story of what happens when a new Ice Age devastates the Northern Hemisphere, when civilization disappears into a voiceless polar night, when men and women turn into human wolf packs in their agonized struggle for survival” (back cover of the ’68s Fawcett Gold Medal edition).  Be warned, this is only a small portion of the novel.

Instead of a sustained dark and disturbed romp through the winter wastelands of a new Ice Age which has covered most of Europe with a layer of ice, Christopher has his English characters flee before “men and woman turn into human wolf packs” to the ex-British colony of Nigeria.  In short, discussion of those who remain (suffering) in England under layers of ice is not the focus of most of the novel.  The fate of the cadre of main characters who set off on a “Nigerian adventure” and are treated by the now independent Nigerians as the British once treated their colonial subjects forms the bulk of the novel.

Unfortunately, the satire is weakened by an often overbearing infusion of the melodramatic (the couples have the habit of running off with each other).  For many readers, the early 60s time specific British context might be off-putting as well as Christopher’s less than politically correct treatment of race (remember, it’s a satire).  The inverting of the colonial gaze is the modus operandi of the work.  That said, I prefer The Long Winter to Robert Heinlein’s later, and infinitely more ham-fisted and contrived attempt to discuss race through an inverted society where those of African descent are in power, Farnham’s Freehold (1964).

Andrew Leedon, who works for English television, learns about the Fratellini effect which postulates that the radiation cycle of the Sun will plunge the Earth into a new Ice Age in the near future.  Andrew meets David Cartwell, who has insider government knowledge of the Fratellini effect, and his wife Madeleine Cartwell.  Here melodrama threatens to turn the work into a soap opera…. David Cartwell is attracted to Andrew’s wife Carol and Andrew is almost forced to visit Madeleine…. blah, blah, blah.  Moving on.  One might have grounds to claim that Christopher’s focus on the disintegration of two families heightens the emotive force of the erosion of British society, due to decreasing temperatures, which remains a visceral/destructive/ever-present spectre around them.

Eventually, as England slowly reverts to an ice-covered state, Carol decides to head to Nigeria (which has recently gained its independence) with Andrew’s two children.  Andrew and his new lover, Madeleine, soon follow.  When Andrew meets Carol he finds out that she’s become the “private secretary” of a wealthy African.

David promises to come down but decides to stay in England.  Andrew’s plan is to find employment in the Nigerian state television service.  However, he quickly finds out that the Nigerians treat the British, who have fleed in mass numbers to the Africa, as they were treated by the British: most jobs except the most menial are open only to Nigerians, wealthy Nigerian’s want British women to be their “secretaries,” accounts of British men raping Nigerian women are circulated prompting irrational crackdowns on white “vagrants” wandering the beaches and streets with less than ten pounds in their pockets, white women are forced into prostitution and perform degrading stage acts, and most whites are forced to live in the worst slums of Lagos, etc.

Andrew, with no chance at procuring another job, attempts to join the Nigerian military (whites are allowed but only in the lower ranks in separate regiments).  However, he’s unable to pay the dash for the commision, i.e. a bribe that has become a standard component of Nigerian culture.  There’s a hilarious sequence when a desperate barefoot Andrew, for a slight dash, consents to be the subject documentary on how the poor whites live in the slums.  He’s asked by the African crew to “buy” (with the documentary crew’s money) any object he wants from a market stand.  Little does Andrew know that the object he bought was a monkey’s penis charm meant to ward off bad luck!  The African documentary crew desperately attempts not to giggle…  Christopher is at his satirical best with these seemingly insignificant but revealing reversals of colonial gaze.  I’ve watched countless documentaries where a white film crew observes with a “detached manner” “natives” buying “ritualistic objects.”  Shortly afterward, Madeleine heads back to England looking for David.

When Andrew had been in England working for television, he’d taken on a Nigerian intern named Abonitu.  They had become “friends.”  Andrew referred to Abonitu as ‘Abo’ (a derogatory British term for the Aborigines of Australia).  Despite this, Abonitu felt accepted by British society.  Here Christopher might be overstating his claim that majority of African colonial subjects saw British society as the be all and end all culturally and socially instead of a necessary way to gain upward mobility in a racially stratified society.  Regardless, Abonitu held London in high esteem despite the way he’s viewed by his colleagues, including Andrew.

When Abonitu, back in Nigeria, sees Andrew buy the monkey penis charm in the documentary he feels pity and finds a job for him through his powerful uncle, despite the laws against whites working in television.  With their social positions reversed, their relationship becomes more than a “colonial overlord” being condescendingly paternal to a “colonial subject.”  After a night of drinking. Abonitu tells Andrew about an exploratory Nigerian expedition in the works with a mandate to asses the possibility of re-colonizing (!!!) England.  Andrew volunteers….

The Long Winter is primarily a biting satire of colonialism and less of a horror story replete with endlessly depressing descriptions of a post-apocalyptical England (there are a few sequences in the beginning of extreme violence which adequately encapsulate England’s plight).   If you expect a work of 60s social science fiction along the lines of Heinlein’s Farnham’s Freehold then you will be pleasantly surprised.  The work’s biggest flaw is the moments of melodrama that clogs the first third of the work detailing the interrelationships between Andrew, Carol, David, and Madeleine.  At least the slow disintegration of English society, the icing of the Thames, the military rule, the ravaging hordes of rapists, forms the backdrop to the melodrama.

I found the satirical treatment of colonialism by far the most fascinating aspect of the work.  Christopher uses the relationship between Andrew and Abonitu as a vehicle to hammer home how the framework of “colonial overlord” and “colonial subject” organized our conception of the Other.  The Western gaze…  Orientalism at work….

Recommended for any fan of 60s science fiction.  A vague knowledge of the colonial relationship between the metropol ( in this case London) and the colony (Nigeria) will greatly increase your enjoyment of the novel.  But remember, The Long Winter functions because it was written in 1962 — not the 70s, not the 80s, and certainly not now.  Context, as with the best satire (Jonathan Swift’s A Modest Proposal, Stephen Colbert’s Colbert Report, Daniel Defoe’s The True-Born Englishman to name a few), is of paramount importance. 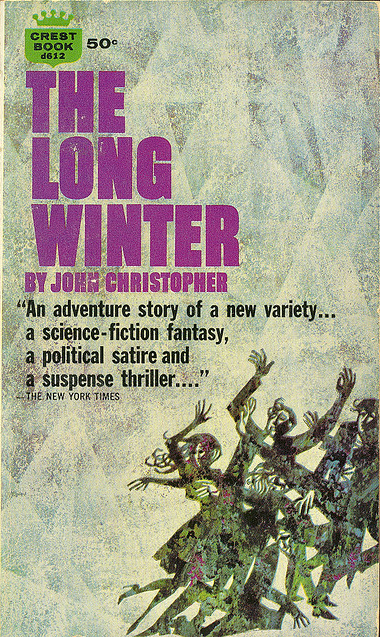