I loved James E. Gunn’s The Joy Makers (1961) and found the collection Station in Space (1958) quite solid…  Thus, I snatched up a lot of Gunn’s fix-up novels and short story collections from ebay…. It is often difficult to distinguish Gunn’s short story collections from his novels due to the fact that his favorite form tended to be the novella and novelette — after their original magazine publications they were combined into “proper novels” or existing novellas, for example ‘The Listeners’ (1968), were expanded to novel length.

Regardless, I cannot wait to read these.  Which ones to do you recommend?

And some intriguing covers…. 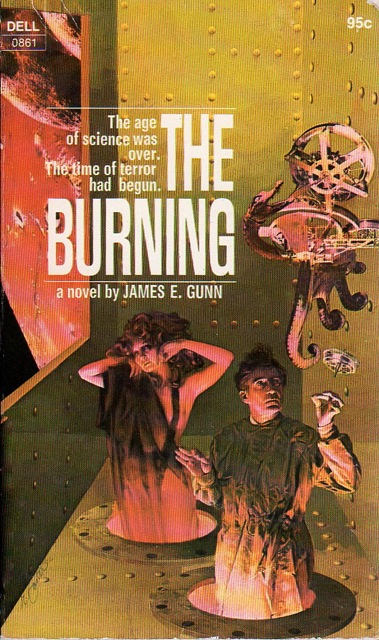 (Robert Foster’s cover for the 1972 edition)

From the inside flap: “Death to the scientists!  The cry for blood vengeance went up all over the world.  Too long had the people been ruled by the power of science.  Now they would have their freedom, even if it mean plunging into a new age of barbarism… even if it meant destroying every man who threatened their ignorance with his knowledge.  John Wilson was a scientist, a great one.  Only yesterday he had been famous, admired, secure.  Now he was a hated enemy of society, a man on the run in a primitive, murderous world.  And his brilliant intellect was at once his inescapable mark of fatal guilt, and his one slim, desperate chance for survival….”

From the back cover: “Wild: the planet where your wealth is measured by what you don’t own! Weird: The zoo of the future with a meat-craving beast from Vega who can open a door into the present  — when he is hungry!  Wonderful: The Venusian factory in Passaic, New Jersey, which manufactures beautiful, ardent girls — who have only one slight flaw!”

(Michael Gilbert’s cover for the 1973 edition) 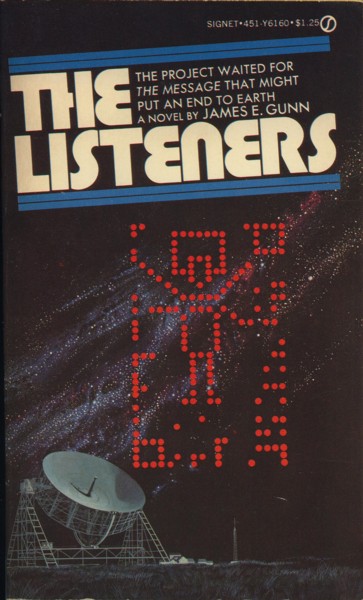 From the back cover: “Voices from the stars — For the fifty years Earth’s “Little Ear” was tuned to the static of the stars.  For fifty years the Project scientists and their director, Robert MacDonald, tried to make sense out of the universal silence.  In the fifty-first year of the Project, a message came from Capella.  Man had contact intelligent life!  But what kind of life called to man from the stars?  Was it peace or war, friendship or conquest they offered to mankind?  And how should Earth respond?  Only Director MacDonald could decide, and with him rested the future of the Project and the fate of mankind…!” 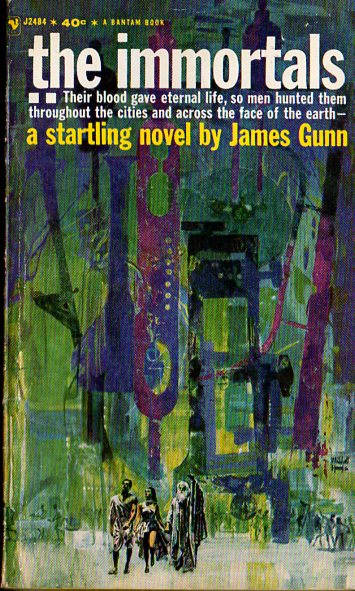 (Mitchell Hooks’ cover for the 1962 edition)

From the back cover: “Their golden blood.  It was a world of utter peril and crippling fear with one bright threat running through it — the golden blood of the Immortals.  And they were cruelly pursued by rulers, rich men and medics because their previous blood was a specific for all of mankind’s ills — including death.  Beautiful and young, aged and wise, the Immortals lived a subterranean existence, hiding from those who would batten on them and bleed them white.”