I still have not reviewed one of my favorite novels (tied with Christopher Priest’s 1981 masterpiece The Affirmation) that I read in 2016: Angela Carter’s The Infernal Desire Machines of Doctor Hoffman (1972). I have an excuse—I successfully defended my PhD earlier this month and am currently revising the 300+ page dissertation for final submission later this summer! And, I must confess, the fear that I won’t be able to do The Infernal Desire Machines justice envelopes me….

On May 7th Angela Carter Online [an indispensable resource for anyone who wants to learn more about her life and works] posted a previously unpublished 1979 interview with Carter conducted by David Pringle for a New Worlds volume that never came together: “The conversation focuses mostly on the topic of science fiction, and includes discussions of the seminal publication New Worlds, writers such as J. G. Ballard, John Wyndham and Michael Moorcock, and whether or not Carter would consider some of her own writing as science-fiction.”

The New Worlds volume would have explored various authors’ views on SF and the magazine itself—a shame it never came to fruition! This post forms a loose series (experimental 70s UK SF/literature) with my similar discussion of Emma Tennant’s relationship with SF.

I have parsed out a few passages that I would love to discuss in the comments. Check out the full interview for needed context and digressions. I have skipped most of her discussion of Heroes & Villains (1969) as I haven’t read it yet.

Her earliest SF readers included John Wyndham. She points out that he was unescapable as he was serialized in major newspapers: “I’d read science fiction on and off since I was about – God knows, I suppose about 10 or 11. John Wyndham’s The Day of the Triffids was serialised in, I think, The Daily Express – somewhere like that – I remember reading it as a serial. It was ages before I realised the limitations of the genre. “ 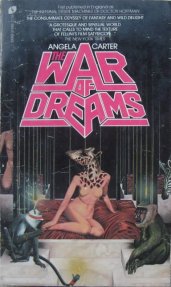 Carter narrows in on by far the best writer to grace the pages of New Worlds: Pringle asks, “So which writers appealed to you in the pages of New Worlds?” Carter responds: “J. G. Ballard. But I’d already read his books. My first husband was a chemist who was a bit of a science fiction buff… Indeed, I bought the first Ballards in hardback. This is all a bit hazy in my memory, but I thought they were wonderful. Truly.” She describes his writing as “virtually intolerable, he really has this gritty feeling of the freeway, and it’s very English as well, although it’s got this particular American overlay.”

Carter describes discovering Ballard and his ilk as “this lode, this seam of intensely imaginative and very exciting fiction.” Grouped with him include Brian W. Aldiss and especially Thomas M. Disch’s Camp Concentration (1968).

She describes how she was classified as a “straight” novelist although Heroes & Villains (1969) was reviewed in science fiction publications and even appeared on syllabi in SF classes. She points out what I find most fascinating—Picador press’ fantastic selection of “imaginative” novels in the late 60s and into the 70s that bucked the standard trends. Picador published Peter Currell Brown’s Smallcreep’s Day (1965), Russell Hoban’s The Lion of Boaz-Jachin and Jachin-Boaz (1973), various novels by Pynchon, Doris Lessing’s The Memoirs of a Survivor (1974), Martin Bax’s The Hospital Ship (1976), etc.

“If you look at the first Picador list, though it’s very interesting because it’s, like, the spirit of ’68. The first dozen or so novels that Picador published are very weighted towards, you know, imaginative fiction as opposed to the naturalistic novel which was the mainstream of English fiction at the time.”

And, as with Emma Tennant, Ballard spurs her to write post-apocalyptical SF: “No, I suppose I felt that although I was very excited and stimulated by this, and perhaps I wouldn’t have embarked on a post-apocalyptic novel if it hadn’t been for Ballard – although there was a lot of it in the air at the time!”

On The Infernal Desire Machines of Doctor Hoffman (1972)

On The Infernal Desire Machines as science fiction romance: “romance isn’t a term like that, it isn’t about libidinal gratification, it’s about the impossibility of the satisfaction of desire – which is what Hoffman is about, and any romance worth its salt is about the destruction of its own object by desire.”

“Yes – New Eve was in fact calculated to give offence. That’s my feminist novel – though none of my sisters liked the book. But it is my feminist statement. That’s sort of bio-SF, isn’t it? Metabiological…”

Pringle points out that that’s a New Worlds novel if there ever was one! She echoes his view: “Yes, indeed. You’re right, I’m sure. Partly because it’s set in this fictive America. One of the things about the New Worlds  group, loosely, was that they had this – well, I have as well…I mean, we were all brought up on this image of America. After all…the future place…”

Michael Moorcock as creator of the necessary literary environment

“You know, that is just what he was doing, just by creating…an environment where it was possible for many, many more adventurous and peculiar things to flourish – though, in fact, New Worlds, of course, Bananas [Emma Tennant’s magazine] was very much the heir of New Worlds. You see, what they were was the avant-garde, and nobody seems to have grasped this.”

She points out that many of the “literary” avant-garde authors such as B.S. Johnson, Alan Burns, and Ann Quin were aware of avant-garde SF of the day: in perhaps, “a weird peripheral way.”

More on New Worlds: “I think it’s extraordinary. I think this is all part of this general proposition, that the magazine [New Worlds] and what it represented was kind of the popular front of the avant-garde. And in many respects didn’t realise it was – it didn’t realise its role as such, they just felt, they just thought, presumably, they just felt they were doing something new and exciting, and proselytising a bit…

And on Moorcock’s prodigious productivity: “you know, and every time he sneezes he doesn’t sneeze five paperback books. I know it’s all hard work, but what can you call it, but a force of nature?”

For additional articles consult the INDEX