On a recent trip to Chicago I spent far too much on vintage SF at Bucket O’ Blood Books and Records (twitter).If you’re in the city and love old SF paperbacks, stop by! I’ll certainly be back. Here are the first four books from that haul.

1. Jack Vance is an author I always tend to buy but never enjoy as much as I think I should–see my recent review of Emphyrio (1969). Thoughts on this one?

2. I have yet to read anything by Alexei Panshin—at least I now have a copy of his masterpiece, Rite of Passage (1968) (nominated for the 1969 Hugo + won that year’s Nebula).

4. And finally, the one I’m most excited about. Evolved humans are thrust into conflict on a terraformed, but dying, Mars. With a fun Powers cover to boot! The rest of Frederick Turner’s SF output appears to be the epic poem variety according to SF Encyclopedia.

Let me know what books/covers intrigue you. Which have you read? Enjoyed?

From the back cover: “DURDANE. A world of strange ways and stranger people. A land where men and women are marked for life by the torcs about their necks and bound to irrevocable destinies by the proclamations of the Faceless Man. A place where defiance is met with death. A kingdom of myriad mystery and incalculable peril within which one youth, Gastel Etzwane, dares challenge the unchallengeable in an extraordinary struggle for mastery of his own unalterable fate…” 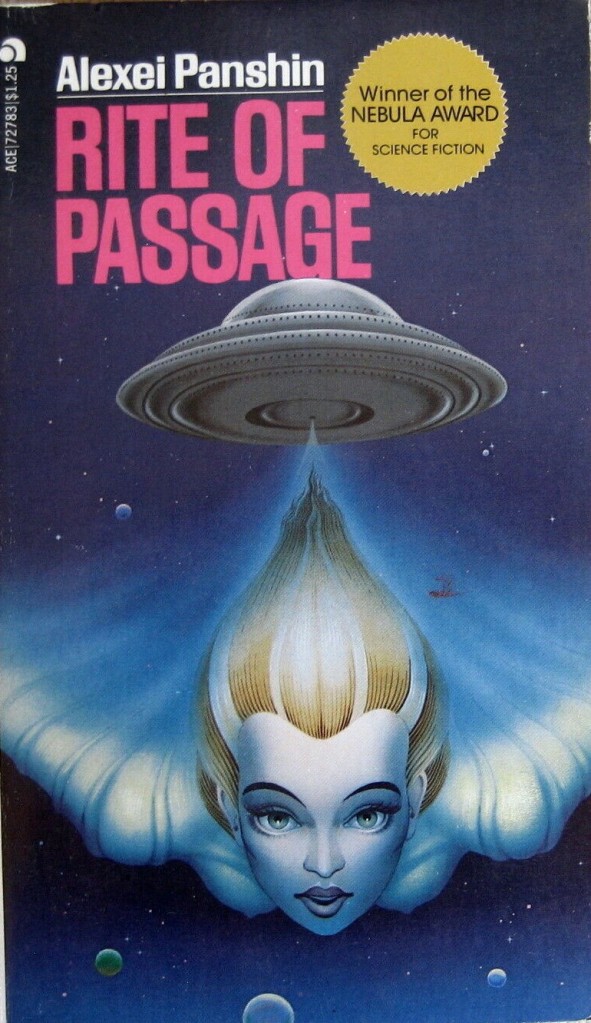 From the inside flap: “In 2198, one hundred and fifty years after the desperate wars that destroyed an overpopulated Earth, Man lives precariously on a hundred hastily-established colony worlds and in the seven giant Ships that once ferried men to the stars.

Mia Havero’s Ship is a small, closed society. It tests its children by casting them out to live or die in a month of Trial in the hostile wilds of a colony world. Mia Havero’s Trial is fast approaching and in the meantime she must learn not only the skills that will keep her alive but the deeper courage to face herself and her world.”

No plot blurb on my edition.  SF Encyclopedia has little to say other than it’s a “comedy in which Aldiss’s penchant for puns and gestural invention was perhaps overindulged.”

From the back cover: “A TERRAFORMED PLANET.

Man had kindled Mars an extra sun, had brought ice and frozen air from the rings of Saturn, had given a dead world life. But thousands of years on the terraformed planet had changed man, too. These proud warriors, winged and armed for the status-war that will shape their planet’s destiny, are human—but no longer of Earth…”