1. I have yet to read any of J. G. Ballard’s late 70s and early 80s short fiction.  Myths of the Near Future (1982) seems to contain some fascinating gems. I’ve previously reviewed two collections of his 50s and 60s fiction on the site—both are highly recommended!

2. My exploration of 60s/70s SF takes me to an another author I’ve only read about– Fred Saberhagen. I enjoy post-apocalyptical landscapes and balkanized and decayed far future societies–but, is there anything original in this take on the theme?

3. I’m proud owner (*cough*) of one of the worst vintage covers ever created. The premise was the sole reason I snatched up Kilworth’s The Night of Kadar (1978)—malfunctions create unusual growth in the seeded human colonists on an alien planet.

4. A fix-up novel (with substantial rewritten and added material) from Richard A. Lupoff…. not an author I’m too familiar with, but this one is endorsed by Harlan Ellison and definitely screams 70s!

From the back cover: “Three decades after the end of America’s space programme, the forests and swamps of Florida are still inhabited by a handful of people dreaming of space exploration—but space exploration of a new kind. Myths of the Near Future, the title story of this outstanding collection, is just one of Ballard’s extraordinary visions of other times and other places, where nothing seems quite right…”

From the back cover: “The passing of thousands of years had left the planet Earth a series of broken lands, a mutated world of distant alien empires and near-at-hand-rapacious satraps. The common people, hunted by the great lords, harried by the evil killer reptiles, were sustained by one last legeng—that some day one would come who would ‘ride the Elephant; and thereby bring back the Golden Age.

The champion, when he came, was no mighty warrior of the West, pledged to destroy the foul wizardry that kept the Broken Lands in subjection, but a leader from the deep swamps where the Free People still lurked. And the power with which he challenged the satraps and the wizards was a power from an earlier age—the power of a long-dead technology which had put its faith in creatures like the legendary Elephant.” 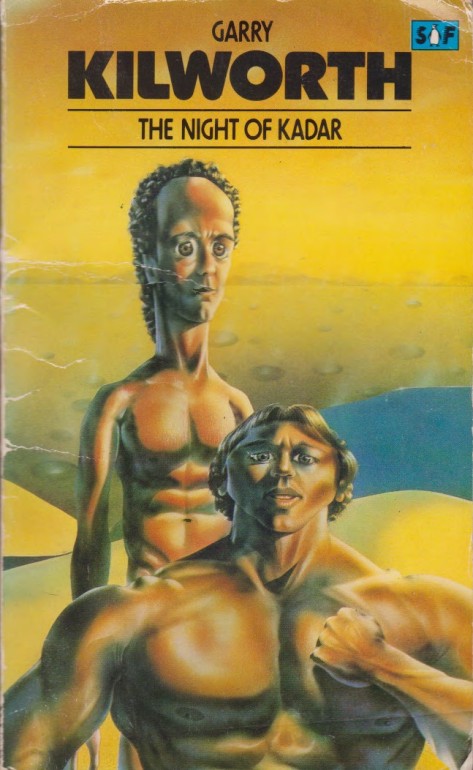 (Adrian Chesterman’s cover for the 1980 edition)

From the back cover: “A STARSHIP NEARS ITS JOURNEY’S END, AFTER THOUSANDS OF YEARS IN DEEPEST SPACE.

Its programmed destination: a world chosen for its similarity to earth. Frozen embryos warm to life, their growth accelerated, and intelligence units instruct the occupants in their future role on the new world.

But before instruction is complete, a malfunction occurs. An alien presence is detected, and a vital piece of information is withheld…” 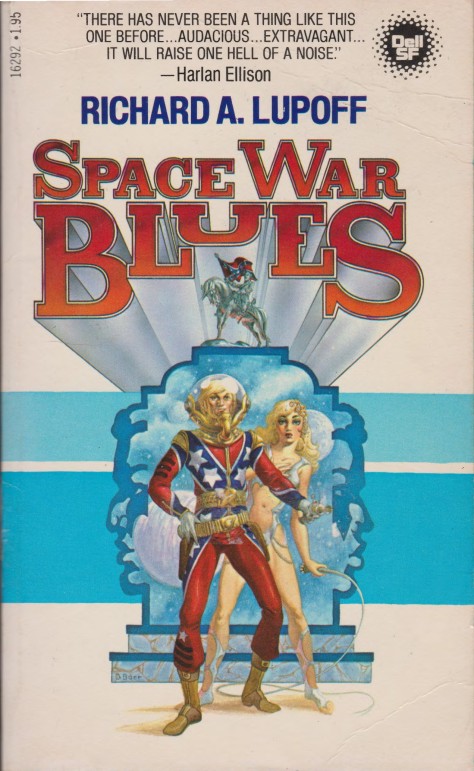 From the back cover: “MAN’S QUESTING NATURE CONQUERED SPACE… THEN HIS ETERNAL STUPIDITY TURNED IT INTO LIVING HELL….

On Yurakosi—where swashbuckling aborigines ride the colossal membrane-shipss, buck-naked to the winds of space…

On N’Haiti–where ultramodern technology marries voodoo to sire a race of blond-haired, black-skinned killer zombies… and

On New Alabama—where a government spokesperson recently announced: No cruvvelin black animam […] goin lay one filfthy paw on some golden curly-head surn baby while Pissfire Pallbox draws breath? Are you with me?“