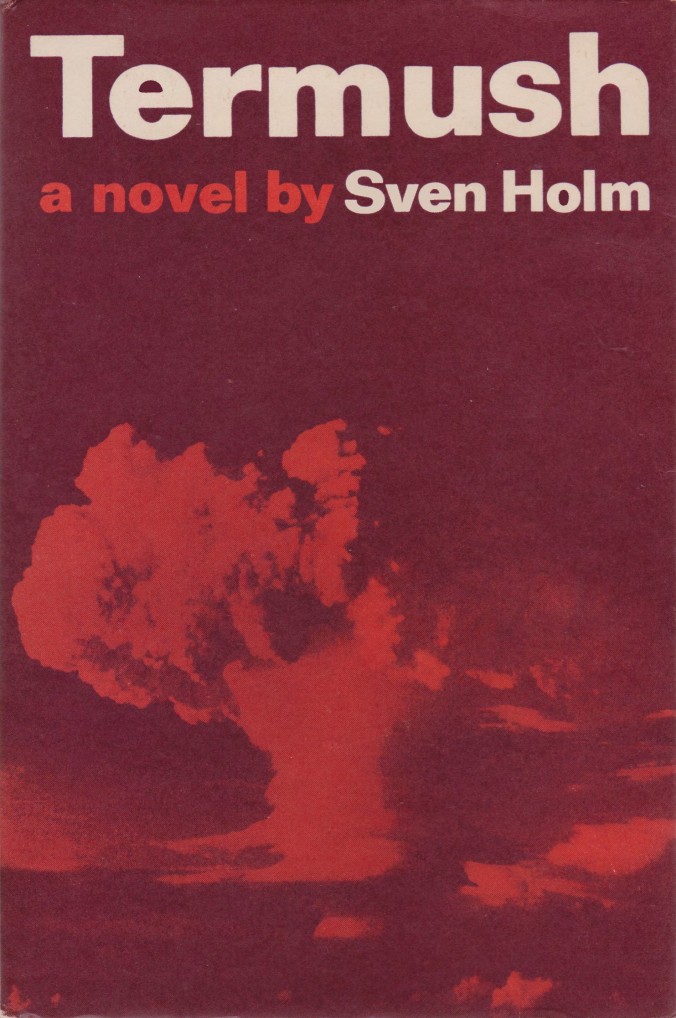 “[He] maintained that it was in fact essential to conceal what could be concealed; indeed, an inspired lie could be preferred to a malignant truth” (24).

Sven Holm’s Termush (1967, trans. 1969) depicts, with stark minimalism, the psychological state of wealthy survivors holed up in a hotel shelter after an apocalyptic nuclear event. This brief work, a mere 110 pages, is not an adventure story. It is not an exercise in nightmarish brutality like The Road (2006) or an account of humanity’s turn towards evil as the gauze of “civilization” falls away like The Death of Grass(1956).

Rather, Sven Holm (1940-2019) (SF Encyclopedia entry), a Danish author of mainstream literature, delves into the psyche of the survivors, their isolation and inability to grasp the immensity of the changes beyond their walls, and their internal transformation as the rituals of “civilization” are maintained while the “reality” of external world infringes upon their oasis. On another level, beyond the effects of nuclear war, Holm’s focus on the upper class is deliberate. Termush serves as a condemnation of the “materialistic” modern human willing to pay a fortune to perpetuate a masquerade of normalcy as the world writhes in agony outside their compounds.

Highly recommended as a study of psychology and morality after a cataclysmic event. In the era of Covid-19, I am reminded of ultra-wealthy New Yorkers retreating to their second homes in The Hamptons, while a personal staff maintains their lavish lives.

After a nuclear event, an exclusive oasis named Termush remains untouched in the rural countryside. The hotel complex contains a sculpture garden, a full-time staff of attendants and doctors, subterranean provision stores, a motor yacht if flight is necessary, access to uncontaminated water, a reconnaissance team, and underground radiation shelters in the case of nuclear attack. After the nuclear attack, the wealthy occupants, including our unnamed narrator (N), emerge from the shelters and live in their hotel rooms in an attempt to create a state of normalcy in the face of the surrounding nuclear devastation.

A series of brief chapters, recounted dreams and events, relate the process of interior transformation experienced by N as the normalcy becomes more and more a charade. Holm introduces his central metaphor via Termush’s advertising brochure: “A physical aspect of the radioactive destruction is the transformation of elements” (9). What will change look like away from the signs of devastation?

N, and his fellow occupants, grapple with a disjointed experience. The hotel reproduces the world as if nothing has occurred–“We had unconsciously thought in terms of something more drastic, a radical transformation, with every single object showing traces of what had occurred, the furniture and the walls changing character and the view outside our window revealing a totally different world” (7). But even Termush isn’t spared from the tangible external signs of the apocalypse as survivors wander in from the surrounding towns, often on verge of death, and appear at the door.

Two connected crises emerge among the occupants—what information should be relayed to the guests by the management team? How should the management deal with non-guest survivors? The chairman with “his powerful obstinacy, his primitive blend of cunning and stupidity attracts supporters to rally behind him” in limiting what the guests should know (44). Most fall into line, comforted by management’s guarantee of ignorance. N and the ex-professor and widow Maria (the only named character in the narrative), attempt to resist the “illusion of complete safety” (49).

Soon cracks emerge within the management team as they can no longer bear the strain of maintaining the semblance of safety. In a drunken rage a survivor steals a carcass from the freezer and disembowels it on the stairs. Staff accost each other. The doctor issues an ultimatum that he will resign unless all new survivors are allowed within the doors.  Termush bifurcates between those fighting the entropic tides that wash at its shores and those who go through the rhythms of ordinary life. N and Maria’s resistance will only last so long.

Holm conveys N’s slow loss of individuality via a sequence of powerful dreams and unfurling metaphors. N’s nights are filled with  increasingly gruesome tableau (fish with their bellies cut open and scenes of radiation sickness) and metaphors of the loss of identity (perpetual fatigue and the feeling of sleepwalking).

Like the “gigantic lions and tigers in stone, lying with their limbs curled” in the statue garden, N experienced an ossification of self (60). N speaks more and more of “our” experiences rather than their own (97).  Rather than individual desires, Termush’s guests act more and more as a unit, a unit motivated by fear. The inhabitants of Termush are but stone relics of the past, transfixed in place. Their last performance of agency only postpones the inevitable.

Unfortunately, copies online are not cheap—this is the most I’ve spent ($25) on an used SF novel, ever. If you can find it and enjoy the more ruminative post-apocalyptic fictions, buy it! This is a precise novel. There are no extra words or moments.

John Christopher’s A Wrinkle in the Skin (1965)