Jack Gaughan’s cover for the 1968 edition

From the back cover: “Long out of print, THE UNHOLY CITY is one of the most remarkable novels of fantastic adventures ever written. The nightmare City of Heilar-Wey, with its ghoulish pleasures, its zany riots, and a giant tiger ravening in its streets, is not a nice place to visit—but it’s a delight to read about!

THE MAGICIAN OUT OF MANCHURIA—a new short novel, published here for the first time–is an exotic saga of the travels of the Magician, a lost Queen of remarkable talents, and their very odd companions, in search of a far land where magic may still live—a story of perils, pratfalls, and pure enchantment.”

Initial Thoughts: I am a huge fan of mysterious “nightmare” cities, strange urban expanses…. And Charles G. Finney, best known for The Circus of Dr. Lao (1935), according to reviews I’ve peered at online seems to deliver.

From the back cover: “In the 21st century, humanity has abandoned the Earth for the Enclosure: a network of cities, built from the salvage of the old world, sealed against al of nature.

Within the Enclosure are a few people who want out.

In Oregon City, a small group plans to escape to the wild Earth beyond the walls. United by something much more than just an idea, they meet in secret. But they are not unobserved. And what they find outside is not what they expect.”

Initial Thoughts: Domed (and doomed?) cities! I desperately hope Sanders’ Terrarrium (1985) avoids the pitfalls of so many humans live out their drugged existence in post-scarcity future novels. George Bamber’s miserable The Sea is Boiling Hot (1971) comes immediately to mind. 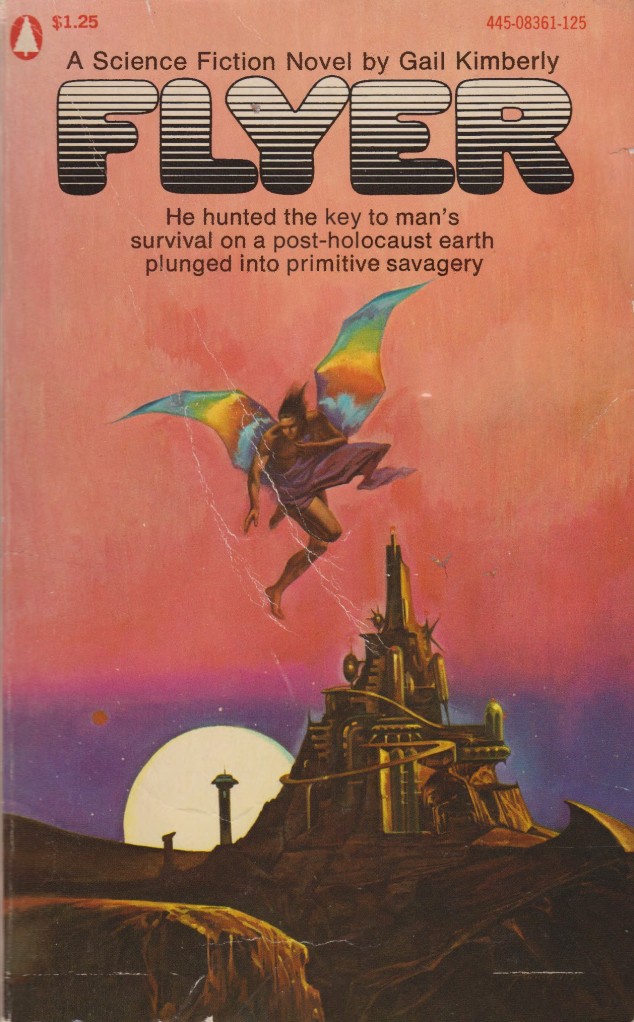 From the back covers: “HUMANITY WAS SHATTERED INTO THREE PARTS.

The Flyers ruled the mountaintops high above the clouds, where the wings that grew from their human bodies enabled them to soar away from danger.

The Walkers were supreme upon the land, fighting incessant wars for territory and slaves, power and plunder.

The Swimmers built their great cities below the surface of the sea, and there laid their plans for world conquest.

But a rebel Flyer named Jerenz had no home, no safety, as he desperately searched for the secret of the mysterious past that had divided up humanity, and for the legendary key that would bring mankind together again before the monstrous process of self-destruction was complete….”

Initial Thoughts: Unknown author and unknown book. While Pyramid is not the highest quality press, I hope there’s something redeeming past its evocative Jack Fargasso cover.

From the inside flap: “IN STEP WITH THE TIMES. If you do not have time to read every issue of every science fiction magazine and anthology, you can still reap the crop of the best of those stories. Because the editors of this annual selection have done the work for you.

Every year there are fine stories by the established masters and surprising tales by newcomers. Science fiction is a flourishing and self-renewing field of literature in step with a world that is going ahead in scientific development and the working out of the world’s future.

In this, the 1980 collection, you will find such familiar names as George R. R. Martin, John Varley, Larry Niven, and others. You will also encounter brilliant new writers including Connie Willis, Tanith Lee, Somtow Sucharitkul, Orson Scott Card, and more.”

Initial Thoughts: This Best Of collection contains a fantastic range of authors—from Joanna Russ to Somtow Sucharitkul. Both are authors I want to explore further. And, considering my Tanith Lee kick as of late, her short fiction beckons.