Published a few months before the Apollo 11 mission to the moon, Robert Hoskins’ anthology First Step Outward (1969) charts an imagined future history of humanity’s exploration of the galaxy. The stories, gathered from some of the big names of the day (Robert Heinlein, Robert Silverberg, Theodore Sturgeon, Isaac Asimov, Poul Anderson, etc.), are grouped as if part of the same future with headings such as “To the Planets” and “To the Stars.” As with most anthologies, this contains a range of gems (such as Sturgeon’s “The Man Who Lost the Sea”) and duds (Ross Rocklynne’s “Jaywalker”).

I’ve previously reviewed five of the thirteen stories in their own posts–linked for easy consultation.

“Gentlemen, Be Seated!” (1948), Robert A. Heinlein, 2.75/5 (Vaguely Average): My first return to Robert A. Heinlein in around a decade is exactly like I thought it would be–thoroughly disappointing. Yes, yes, yes, I know this is far from what he was capable of. The number of reprints this misfire of a story receives mystifies (it appeared in the regularly reprinted The Green Hills of Earth and The Past Through Tomorrow).

END_OF_DOCUMENT_TOKEN_TO_BE_REPLACED

The following review is the 7th post in my series searching for “SF short stories that are critical in some capacity of space agencies, astronauts, and the culture which produced them.” Some stories I’ll review in this series might not fit. And that is okay! I relish the act of literary archaeology.

Thank you Antyphayes, “Friend of the Site,” for bringing this story to my attention!

Up next: Philip K. Dick’s “A Little Something For Us Tempunauts” in Final Stage: The Ultimate Science Fiction Anthology, ed. Barry N. Mazlberg and Edward L. Ferman (1974) [You can borrow this anthology online in one-hour increments]

“The Government needs YOU!

END_OF_DOCUMENT_TOKEN_TO_BE_REPLACED

This anthology contains the 4th post in a loose series on SF short stories that are critical in some capacity of space agencies, astronauts, and the culture which produced them. I decided to review the entire anthology!

Previously: William Tenn’s “Down Among the Dead Men” in Galaxy Science Fiction, ed. H. L. Gold (June 1954). You can read it online here.

Up Next: Theodore Sturgeon’s “The Man Who Lost the Sea” in The Magazine of Fantasy and Science Fiction, ed. Robert P. Mills (October 1959). You can read the story online here. 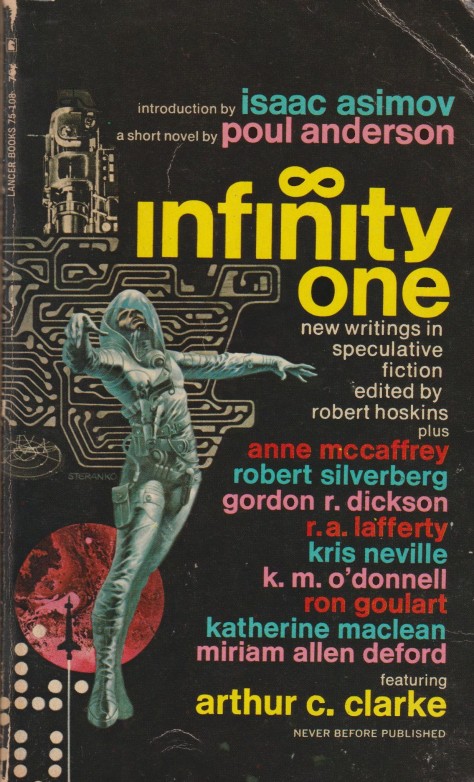 Robert Hoskins “resurrected” Infinity Science Fiction magazine (1955-1958) as a five volume anthologies series between 1970-1973. The first volume, Infinity One (1970), contains sixteen original stories and one reprint from the original magazine–Arthur C. Clarke’s “The Star” (1955). SF Encyclopedia describes the anthology series as “a competent but not outstanding series.”

A wonderful Richard Powers cover and another by Don Punchatz which grows on me ever day (hauntingly surreal in its illustration of the book’s plot)….

Bob Shaw is Mr. Perpetually Average–see my reviews of Ground Zero Man (1971) and One Million Tomorrow (1971)—but MPorcius claims Night Walk (1968) is worth the read [here]—I took a peek at the first few pages and it shows promise.  But SF Potpourri’s lengthy rundown of his other work casts a shadow [here]!

Who can pass up Lafferty?  I have to admit, the premise of this particular novel does not appeal to me in the slightest.  But, I purchased the book for less than $2 and it’s a $25+ (with shipping) paperback online!

Another Ted Thomas and Kate Wilhelm collaboration—one of my Kate Wilhelm’s SF guest posts [here], by Mike White, argues convincingly that it is not one of her better novels…. alas.

And an anthology edited by Robert Hoskins.

Since the beginning of the year MPorcius, who presides over MPorcius’ Fiction Log, has reviewed a handful of Kris Neville’s short stories (here and here).  Because the name was on my mind and I had not read any of his work in the past, I eagerly picked up a copy of his fix-up novel Bettyann (1970)— which contains contains two previously published stories “Bettyann” (1951), which appeared in New Tales of Space and Time, and “Ouverture” (1954) which appeared in 9 Tales of Space and Time, both edited by Raymond J. Healey.  The novel is hard to find as it was only published by Tower Books.

Neville is praised by Barry N. Malzberg as an author, if he had not abandoned the field for the sciences, who could have been among the “ten most honored science fiction writers of his generation” (Malzburg’s intro to Neville’s “Ballenger’s People” in the 1979 Doubleday collection Neglected Visions). END_OF_DOCUMENT_TOKEN_TO_BE_REPLACED

A fascinating collection (one of three acquisition posts incoming) via Dunaway’s Books in St. Louis, MO (on one of my numerous perambulations…).  And there were nearly one hundred more novels I would have snatched up if I had unlimited funds and unlimited room.

A hard to find feminist SF novel, and supposedly quite solid, by Zoe Fairbairns.

A Michael Coney novel I’ve been dying to get my hands on—the immortality concept delightfully satirical/hilarious.

A strange 70s fix-up novel of 50s material by an author championed by Barry N. Malzberg (and John Clute)—Kris Neville.

And Vance, one rarely goes wrong with Vance…