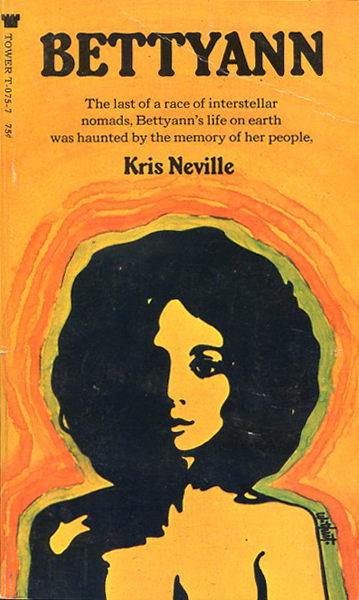 Since the beginning of the year MPorcius, who presides over MPorcius’ Fiction Log, has reviewed a handful of Kris Neville’s short stories (here and here).  Because the name was on my mind and I had not read any of his work in the past, I eagerly picked up a copy of his fix-up novel Bettyann (1970)— which contains contains two previously published stories “Bettyann” (1951), which appeared in New Tales of Space and Time, and “Ouverture” (1954) which appeared in 9 Tales of Space and Time, both edited by Raymond J. Healey.  The novel is hard to find as it was only published by Tower Books.

Neville is praised by Barry N. Malzberg as an author, if he had not abandoned the field for the sciences, who could have been among the “ten most honored science fiction writers of his generation” (Malzburg’s intro to Neville’s “Ballenger’s People” in the 1979 Doubleday collection Neglected Visions).

Bettyann demonstrates some of this promise.

The premise of Bettyann is pure pulp but swaddled up in the distinctly non-pulp aura of elegiac melancholy.  The first plot threat follows the Amio who live on “their great Light Ship, which sailed along the currents of the universe outside the Einsteinium continuum” (9).  They all join together in a vast subconscious mind, “shaped by racial memories,” where every death results in the each being diminished as a part of the whole goes missing (9).  The Amio are nomadic, their ship is their home,  their bodies are naturally immaterial but able to become solid and take on whatever form they want when they attempt to change cultures their encounter.

The Amio journey from planet to planet attempting to impart some of their ageless wisdom.  Once they journey down to a planet where crab people life but encounter rituals counter to their conception of the world.  The leader of the crabmen proclaims, “And warriors, attend: Select those to be torn apart in honor of our guests” (22).  The Amio feel the pain of their own while the crabmen tear each other apart “to become gods, and this is the only path one may take to obtain that goal” (22).  They hold on to the idea that although ideas they disseminate might not immediately transform a people in the future some kernel of what was planted might emerge.

As more and more die as a result of their inability to transform those they encounter, the Amio realize that they are trapped by their past.

One has the feeling that the Amio have tried for generations to influence the people they encounter with the same predictable patterns of defeat.  They are bounded by their birth and its is up to someone separated from them at birth to influence (perhaps) the cycle.  They collectively decided that the races was dying not a literal death, but a “psychic, spiritual death, a death of the will” (71).  And only a child could restore them, “only a child could save them” (71).

The second plot thread follows Bettyann, an Amio child trapped inside of a baby’s body: “‘She’s actually growing in this body, have you noticed? She’s heavier.  Her arms are getting fat.’  ‘We may have trouble getting her out’ (7).  Bettyann—“she was the youngest of us all, and none have come after her” (10)—is stranded on Earth after the two aliens posing as her human parents are killed (apparently they can be killed if they are caught unawares) in a car wreck.  Her arm is damaged beyond repair.

She is adopted by Jane and Dave who are also trapped by a certain sense of the past, of the world changing before their eyes in directions they cannot grasp.  Dave sinks into nostalgic daydreams where he imagines what memories “they would lay out for Bettyann to think back to with sadness when she moved away from them into the world of her own choose” (19).  Both are struck by existential angst as the indistinct forces of war rages around them.  Jane’s thoughts are the more disturbing as she lays in bed: “It seemed to her, sometimes, that the God of the real universe must have died a tiny baby in some other universe, and all the galaxies in the sky were but exclamation points to punctuate its nameless terror” (39).

As Bettyann grows her alien nature is molded to fit her new form: “slowly there were regroupings to dictate of the form she wore, and new pathways came into being in response to the logic of flesh” (11).  As she ages she has numerous experiences that feel distinctly inhuman, “lying in bed one night, she awakened to feel her thoughts twisting in her body like an imprisoned thing seeking freedom” (32).  Later in life she feels that she might be “an attraction in a carnival side show” (11).  Of course, it is only near the end of the novel that she realizes who she is.

Bettyann is a remarkable and precocious young girl obsessed with learning about her world, her past.  Neville is adept at the small touches that make her childhood tangible.  For example, Bettyann’s doll, “all day he would read.  At night she would take him to bed with her and he would whisper stories to her” (24).  She loves to read (74) political philosophy, history, and literature.  Her father desperately wants her to make something with her life, pursue the sciences. “Science […] is the thing for girls nowadays” (80).  Perhaps because he feels that his life has not changed the world in any meaningful way.

Both storylines culminate as the Amio realize that they need to find the girl they abandoned (accidentally) on Earth and Bettyann realizes the nature of her past.

As with many fix-up novels that are not simply thematically linked novels, there are some structural issues with Bettyann.  The parallel nature of the two major story lines—the ideological/socialogical crisis of the Amio that results in their search for Bettyann and Bettyann’s growth into adulthood—ends two-thirds of the way through as the Amio exit the narrative until the last few pages.  Likewise, some portions have a distinctly 1950s feel while other portions feel like their were written in the late 60s.  Previously published material stitched, expanded, and modified does not often yield seamless constructions.

Structural issues aside, Bettyann‘s thematic focus on collective memory, nostalgia, historical cycles, the influence of the distant past on current thought, of youth and old age, societal senility and decadence is all a breath of fresh air.  The pulp premise of alien stranded on Earth is recast in meaning-rich ways.  The way of telling oozes elegiac mournfulness, a testament to Neville’s often powerful, but careful, prose.

Why this was never reprinted in the US is beyond me.  Recommended.