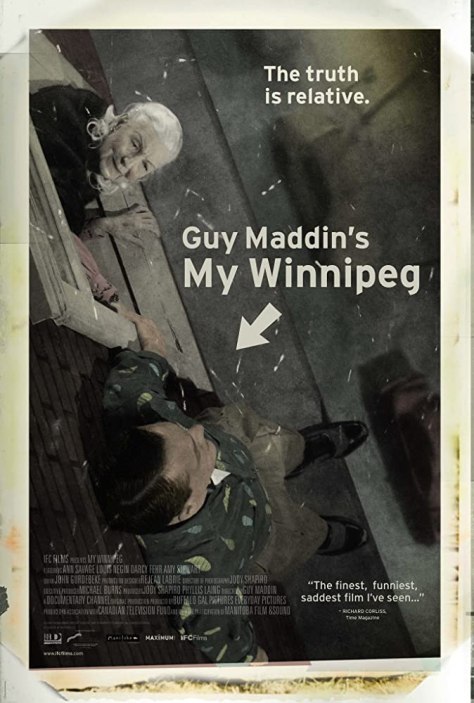 Where to start?  At one time in my life I hid from the words “palimpsest”, “city”, “meditation”, and even, “experimental.”  Then I watched Terry Gilliam’s Brazil, read some Borges, picked at the juicy bits of Italo Calvino’s Invisible Cities — moved to Austin, Texas — rooted around in the dark corners of the silent film section of Vulcan Video or I Love Video with a dear friend — learned that film acting came from theater acting (this might seem obvious) — eventually concluded that I’m less interested in silent film than deliberate homages/manipulations of the genre (silent film with SOUNDS) — was lectured (by the above friend) that theory, however egregious the product might be (think some pieces of modern art) can still be intriguing (I seem to remember the statement, “I just want to collect the art manifestos, not the art”).

So after my tangential outpouring, I arrive, at the statement: Guy Maddin’s My Winnipeg is not self-indulgent tripe but rather an occasionally meditative, but above all, moving masterpiece that revels (and I mean REVELS GLEEFULLY) in the vicissitudes and meanderings of that delightful word, memory….

One might ask, who is Guy Maddin?  He’s one of those mysterious/elusive film directors (in product and personal life) in the vein of The Brothers Quay or Peter Greenaway.  A Canadian who completely eschews Hollywood, retreats to dark corners, creating dark little gems, that prod and provoke, that explore occasionally taboo subjects with delightful glee and evident technical mastery.  He’s one who conjures ancient forms (in Guy Maddin’s case, silent film) and manipulates those cinematic forms (no form is sacred!) in bizarre ways…

Guy Maddin = frequent short cuts, grainy images, manipulated lenses, black and white, title cards, sections where the actors talk, sections where we can’t hear them, stilted/wooden acting (a la silent film).  Expect journeys through the perverse, the nostalgic, unsettling nostalgic journeys through the perverse (for example, his films Cowards Bend the Knee or the Blue Hands, Brand upon the Brain!, The Heart of the World, etc).

My Winnipeg is not only Guy Maddin’s most “mainstream” and least controversial in content film but also BY far his best.  But be warned, read up on Maddin before you embark!  One particularly misinformed (dare I say, brainless?) reviewer wrote, “I did not learn anything about Winnipeg…”   I wince and mutter, “you missed the point entirely.”  My Winnipeg is a pseudo-documentary.  We are glimpsing memories which the viewer is completely unable to differentiate (do we need to?) as true or false or even constructed from other memories.

Maddin mixes bizarre “historical” events (a horse and ice flow that fosters a baby boom, the destruction of an ice hockey rink), with “memories” and fantastical stories about his youth (being born during a hockey game, etc), unusual activities (man pageants, seances carried out by various prostitutes with the spirit of the bison and Winnipeg’s mayor), and weird “facts” about Winnipeg (the hidden alleys and hermaphroditic streets, collecting signs, Native American slums on the roof tops beneath the signs for old theme parks)….

Not only does Maddin pull all his visual tricks, but his story telling (entirely episodic in this case) is at the top of his game.

Previously, I’ve always found that Guy Maddin’s style works best in short film format (The Heart of the World, Sombra Dolorsa, for example).  However, My Winnipeg is perfect at 80 minutes.  As always, I have some qualms about some of the content — for example, “the lap” — but, in NO WAY does it detract from the spectacle that unfolds.  Absolutely stunning….

Guy Maddin wanders through that sign graveyard — each signifies something… 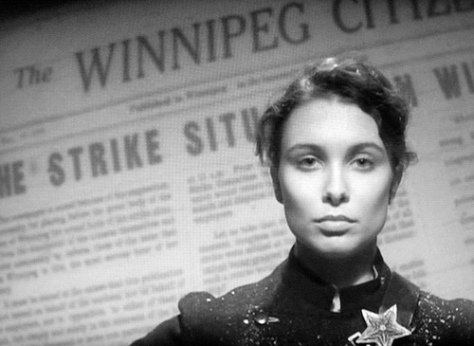