Network (1976) is by far my favorite Sidney Lumet film and one of my favorite films of all time.  The performances are all top-notch and the script remains one, in my opinion, of the best ever written (yes, it’s so refined and witty that the possibility of such words actually coming out of someone’s mouth is improbable).  The plot follows a TV network’s exploitation of a TV anchor (who may or may not be completely deranged).  Faye Dunaway rightly won an Oscar for her role as a driven “career woman.”  The other Oscar winning actors of amazing supporting cast include Peter Finch and Beatrice Straight.  One of the great American films from the 70s (and all time)…

Stanley Kubrick prevented this film from releasing at the same time as his similarly plotted (yet satirical) Dr. Strangelove or: How I Learned to Stop Worrying and Love the Bomb (1964).  Lumet’s Fail-Safe has virtually the same plot but is a serious drama replete with a war room, tension, Russian premier, tension, more tension, and then, the bomb.  Henry Fonda is at the top of his game and the black and white cinematography is often breathtaking (especially the last sequence when the bomb explodes).  A tightly plotted and well-acted (for the most part) drama which has been overshadowed by Dr. Strangelove (which is rightly famous).  If you haven’t seen this, you must!  It encapsulates in a succinct, terse, and vivid manner the fear (and ramifications) of nuclear war…

No list of Lumet’s best could possibly leave out 12 Angry Men (1957) — one of the greatest American films EVER made.  I saw this many many years ago (well, I’m young so that’s relative) at a showing at the University of Texas in Austin and it as remained with me ever since.  This was Lumet’s VERY first film!  The plot is simple — a boy has been falsely accused of murder and eleven of the twelve jurors are absolutely convinced that he’s guilty.  They all want to go home and it’s up to Henry Fonda’s character (who has suspicions that something is amiss) to slowly overcome their prejudices and expose the truth. 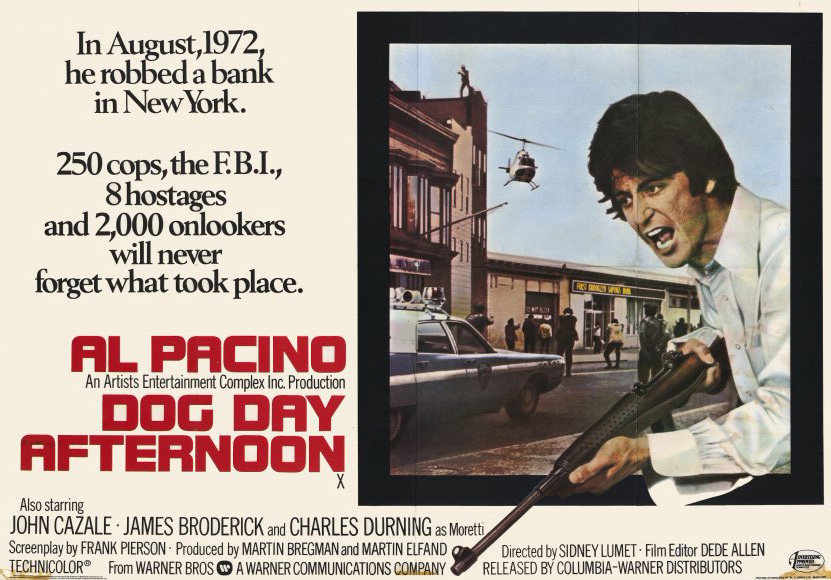 Al Pacino puts in one of his best performance as Sonny in Lumet’s gritty film. Sonny along with some accomplices decides to rob a bank.  The situation immediately goes astray and spirals out of control.  It is clear that Sonny has never adjusted to civilian life after his stint in a Vietnam — as a result the audience feels for him despite his actions.  Although not one of my favorite of Lumet’s films I appreciate the work and its merits despite the fact that it failed to resonate with me (I tend to avoid bank robbery and heist movies in general).

I watched this film a while back and I’ve since forgotten most of the details of the characters, plot, and general feel of the work.  I do remember how drastically Albert Finney’s depiction of Poirot differs from David Suchet’s in the masterful British TV-drama series Agatha Christie’s Poirot (1989-2002), (2003-present).  Regardless, it’s a delightful adaptation of one of Agatha Christie’s most famous stories and the constricted environment of the train cars heighten the tensions.  I should watch it again sometime….