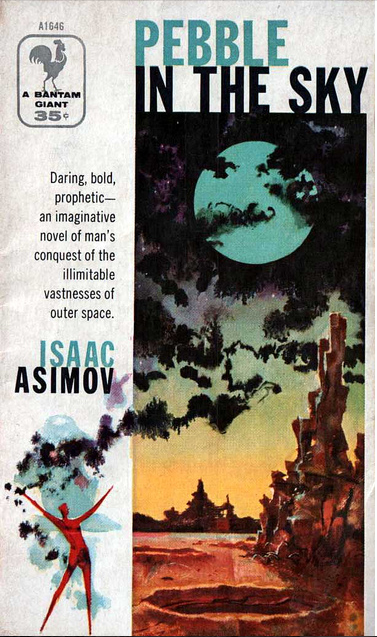 Pebble in the Sky (1950), Isaac Asimov’s first published novel, is a revision of the earlier short story ‘Grow Old With Me’ published in the late 1940s.  The novel itself takes place in the vast Galactic Empire based at Trantor that features in so many of Asimov’s short stories and novels — most famously, Foundation.  Although I am generally unimpressed with Asimov’s science fiction, Pebble in the Sky contains intriguing world building and an elderly man as the main character which is rather rare in sci-fi (albeit, this does not prevent a silly romance between the other younger main characters from providing the novel’s emotional core). But, most appealing to me, Asimov moves away from the all too simplistic dichotomy of good vs. bad that characterized most pulp of the day.

Joseph Schwartz, a retired tailor, is accidentally transported thousands of years into the future due to a nuclear laboratory accident (be warned, Asimov had not fully settled on his Future History outline so readers who know Foundation inside and out will find some dating inconsistencies in Pebble in the Sky etc).

Future Earth has been drastically transformed…  The planet is a minor province in a vast Galactic Empire, its soils and air is radioactive, and its people are governed by strange (an outside might argue, disturbing) customs.  Earth is ruled by a Procurator who lives with his court high in the Himalayas.  Local authority is in the hands of a group of fanatics who believe that Earth should be independent from the Empire.  Due to the barren state of the planet the population is held low and all individuals over the age of sixty (and those who no longer can work) are euthanized.

Due to the fact that the language has changed drastically, the people who find Joseph think that he is mentally handicapped.  He is taken to a controversial doctor in Chica (what was once Chicago) who has developed a machine to increase intelligence (queue standard plot device).  Joseph is “volunteered” without his knowledge for the procedure…  Over the course of the rest of the novel Joseph learns the true extent of his new abilities.

The second plot strand follows Bel Arvardan, an Archaeologist at the University of Arcturus.  Bel Arvardan is a proponent of a controversial theory that all of humanity originated on Earth.  However, due to the intense hatred Earth holds for Outsiders and the Galactic Empire’s hatred of Earth — Asimov makes it clear that this is a vicious self-perpetrating loop and neither party is more complicit than the other — Arvardan’s theory is met with derision.

Both plot strands — Joseph Schwartz + Dr. Shekt’s scientists who operate on him and Bel Arvardan’s archaeological mission — combine in a rather contrived way.  Arvardan falls head over heels for Pola, Dr. Shekt’s daughter, despite his initial prejudice: “The women weren’t bad-looking…  His brows knit.  Of course even tolerance must draw the line somewhere.  Intermarriage, for instance, was quite unthinkable” (123).  Eventually the parties uncover an Earth plot to send missiles with a virus to the planets in the Galaxy — but who will listen to them? Can they even agree with each other what should be done?

Read as a commentary on colonialism Pebble in the Sky is at its most thought provoking.  The Galactic Empire reads as a sort of European power who have colonized other planets.  For example, Bel Arvardan’s opinion of Earth people is complex due to the poor status of Earth — he believes that he is more enlightened, yet, simultaneously admits that his prejudices are from birth.  Try as hard as he can to dispense with childhood indoctrination it creeps into his dialogue, his thoughts, and his actions.  It’s rather a shame that Asimov thought that the only way for Bel Arvardan’s views to be fully altered happens after he fell in love with an Earth woman….

Earth’s inhabitants (and fanatical organizations that govern them) view the Galactic empire with hostility as well.  Earthmen are unable to leave the planet for healthier worlds yet are simultaneously condemned by the outside world for their “barbarous” actions despite the environmental situation on their radioactive planet.  Both sides have a full range of superstitions they hold for each other.

Asimov’s world building and characterization is top-notch.  However, I found that the plot integrated rather haphazardly into the word — and plot-facilitating last minute insertion of missiles filled with biological weapons is simply to bring a little tension and a quick conclusion.

(Uncredited cover for the 1964 edition)

(Richard Powers’ cover for the 1950 edition)

(Uncredited cover for the 2008 edition)