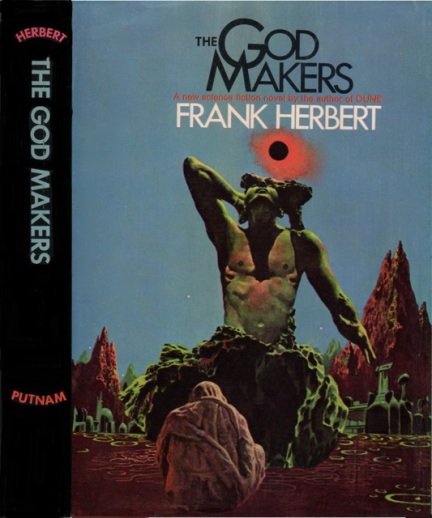 As of late I’ve been returning to the extensive catalogue of Frank Herbert’s non-Dune novels on my shelf — The Eyes of Heisenberg (1966) was an engaging read with adept world building which created an intriguing/harrowing dystopic future.  The God Makers (1972) lacks not only Herbert’s trademark dense prose (for example, constantly shifting perspective over the course of a conversation) but also features one of his more poorly conceived future worlds.  This might be due to the fact that the novel was cobbled together from four short stories from the late 50s and early 60s: ‘You Take the High Road’ (1958), ‘Missing Link’ (1959), ‘Operation Haystack’ (1959) and ‘The Priests of Psi’ (1960).  The melding of the short stories into a cohesive whole feels rushed.

However, I’ve found even Herbert’s weaker novels are filled to the brim with intriguing ideas often conveyed in pseudo-philosophical ponderings from invented (but relevant) texts that head each chapter.

If you decide to buy a copy definitely track down the Putnam 1972 first edition or Berkley Medallion’s 1972 edition — both are graced with Vincent Di Fate’s otherworldly masterpiece of a cover.

In the far future a massive galactic empire stretched across the galaxy.  However, a devastating series of wars — the Rim Wars between — destabilized and cut off numerous planets from the control of the galactic center.  Five hundred years later two organizations, the Rediscovery and Reeducation Service (R & R) and I-A (Investigative Adjustment), seek to reintegrate planets — often if deemed dangerous with whatever force is necessary — that have lost contact with the galactic center.  The overarching purpose of both organizations is to prevent another Rim War.

Lewis Orne is a young agent of R & R who ran away from the dominating women in his family who wanted him to enter politics.  On his first solo assignment on the planet of Hamal he correctly discovers that the supposedly peaceful society is actually a warlike one waiting to pounce.  He contacts I-A who send in the abrasive and snarky agent Stentson, who becomes Lewis’ mentor.  Stentson agrees with his assessment and detects great promise in the young man and promotes him to I-A.

Unbeknownst to both of them Lewis Orne is the “creation” of the Abbod and his monks of the planet of Amel (yes, Abbod not abbot) in his class “Religious Engineering” i.e. “God Making” (10).  Making a god is fraught with danger due to the fact that “having made a god, we achieve something paradoxically no longer our creation   We could well come the creation of that which we create” (11).  Also, wether the God will become a malevolent force is also unknown….  This introduces the main theme of the novel — the idea that Gods are created by man.  However, in this case the combined will of man “actually” creates a God.  This begs the question, why does Amel want to create a God?  Why do they want to be controlled?  When this theme is introduced Herbert halts developing/exploring the fascinating post-collapse world and the government’s two supporting institutions — the I-A and R & R.

Unfortunately, the series of events where Lewis’ growing psi powers manifest themselves (in the form of unusual hunches, surviving incredible injuries, uncovering hokey political plots) become less and less intriguing.  And of course, along the way he has to find his true love and take a break from being a God.  The watershed moment occurs when Lewis uncovers from the smallest inklings of evidence a massive plot centered around his family where powerful women seek to take over the government.

After this is easily suppressed, Lewis heads of to Amel to learn about his true identity (and new found powers) from his creators.

The first third of the novel — Lewis Orne’s initial assignments and his relationship to his mentor Stentson — is fantastic.  The post-collapse world is well drawn however Lewis’ first missions are simply stepping stones to the rest of the novel.

The core of the novel takes place after Lewis becomes aware of his psi powers and uncovers the the painfully silly “powerful women are taking over the government” plot.  The last third of novel is after Lewis arrives on Amel.  Here, Herbert indulges in endless philosophical ruminations on the nature of religion as Lewis undergoes a series of tests.  The monks on Amel are also presented with a new situation because Lewis is the first human God they’ve created:  “This is our first human!  What have we touched in the past — a mountain of Talies, the Speaking Stone of Krinth, the Mouse God of Old Earth, animate and inanimate elements of that ilk” (153).

A readable novel that tantalizes the reader with its religious/philosophical musings but never pulls you into the world/characters.  Lacks the dense complexity of The Eyes of Heisenberg (and obviously Dune)… 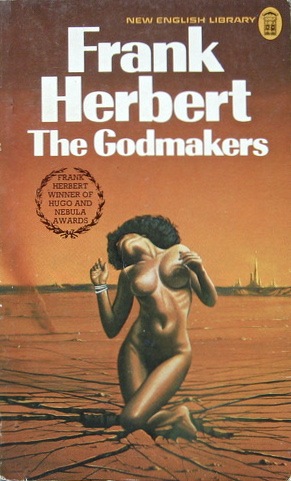 (Bruce Pennington’s cover for the 1981 edition)

(Uncredited cover for the 1986 edition)