New Worlds was one of the premier British SF magazines under the editorship of Michael Moorcock.  It features some of the most experimental works of the era and was important in the growth of the New Wave movement.  Many of the frequent contributors went on to make a name as premier SF authors (Ballard, Aldiss, etc).

This best of collection (1964-1967) is on the whole uneven.  Its big name authors—such as Keith Roberts and Moorcock himself under a pseudonym—disappoint.  The most evocative stories are by rather lesser known voices, Langdon Jones, Charles Platt, and Pamela Zoline.  Zoline’s brilliant entropic vision, “The Heat Death of the Universe” is not to be missed.  The second best work in the collection is (surprisingly) an early story by Barrington J. Bayley (as P. F. Woods) whose novels I have reviewed extensively on this site (The Garments of Caean, The Fall of Chronopolis, etc).  At the very least the collection demonstrates the range of styles/visions that featured in the magazine.

Recommended only for fans of New Wave SF.  Some of the more well-known stories can be tracked down in other collections.

“In Passage of the Sun” (1966) novelette by George Collyn, 2/5 (Bad):  In Moorcock’s introduction to the story he points out his hatred of “stories that depict the future in terms of medieval feudalism” (10).  I am unsure why this story somehow bucks the trend despite Moorcock’s high praise.

George Collyn (Colin Pilkington) is an author I have not heard of or read in the past.  His sole output was nine stories for New Worlds magazine and one for The Magazine of SF and Fantasy from 1964-67.  “In Passage of the Sun” is a relentlessly dark and pseudo-retelling of the last days of Acre (the last non-island Crusader possession in the Middle East).  The lords and ladies have Crusader-esque names like Bodwin of Luna (Baldwin) and King Gie (Guy).  If Collyn really did mean it to be a retelling of Acre it’s unfortunate that instead of Muslims there are giant lizard aliens called Throngi who can survive spaceflight as long as they have breathing contraptions around their gills.

Earth is a wasteland after the Throngi attacks.  Religious obsessions with Mother Earth and internal divisions amongst the lords and ladies—who control the hordes who dwell, huddled, dirty, aimless, under the few remaining glass domed cities—means that the war goes on and on.  You know, history and cycles and history and cycles.

“Multi-Value Motorway” (1967) shortstory by Brian W. Aldiss, 4/5 (Good):  A difficult story which reveals much on rereading…  Charteris, “he was himself; also, perhaps, a saint” (41) possesses incredible charisma and seems to pull everyone along with him.  The world itself is reeling from the effects of the Acid Head War which saw “Psycho-Chemical Aerosols” sprayed across most of Europe.  The language of the story parallels the psychic decay of the characters—allusions to SF authors abound, fragmentation results in strange puns and odd images.  For the stalwart only for this is Aldiss at his most radical.

“The Great Clock” (1966) shortstory by Langdon Jones, 4/5 (Good):  One of the better stories in the collection is a though-provoking allegory about a vast clock in which a man is imprisoned.  The mechanisms of time—gears, pendulums, wheels—constantly need maintenance.  The man, unaware of why he is in the clock or how he got there, wakes up, walks past the bodies of the previous clock keepers and makes sure everything is running smoothly.  But, it slowly dawns on him that he seems to have less and less time.  The clock, in its precision, forces him to question his existence.  The microcosm of the clock and single man, the macrocosms of clock and world.

Although often dragged down by endless descriptions of the workings of the clock, Langdon’s story is engrossing with an almost meditative refrain, “And the clock ticked.”

“The Post-Mortem People” (1966) shortstory by Peter Tate, 3/5 (Average):  A forgettable dystopic story about Anton Heyar who tracks stalks to the soon to die and claims their corpses as his own.  There is cash in the scheme as their body parts are greatly desired by the spare-parts surgeons and their wealthy clients….  Doberman Birkk, a “mere morgue attendant,” is in awe Anton Heyar and his craft (86).  Anton’s good fortune unravels as the wife of one of his claimed corpses meets up with a potential victim he is stalking.

A quick, unspectacular read…  I am still tempted by Tate’s numerous all but forgotten novels.

“The Disaster Story” (1966) shortstory by Charles Platt, 3.5/5 (Good):  This is the second work of Charles Platt I have read and it’s a disturbing deconstruction of the allure of post-apocalyptical fiction: it begins, “This is an attempt to isolate and express the ingredients which endow a distinct type of science fiction with unusual appeal” (103).  In Platt’s view the allure of such SF involves the overwhelming escapist desire to be “free, alone in the world, and no longer trapped in the crawling assembly lines” (103).  Of course, in this world of freedom the man will still need to possess, to control, “I will meet the last woman on Earth.  She will be young and physically attractive and she will love and serve me unquestioningly” (105).  The post-apocalyptical landscape is a blank tapestry for wish fulfillment, the desire for everything to be wiped away.

“The Heat Death of the Universe” (1967) shortstory, Pamela Zoline 5/5 (Masterpiece):  Sarah Boyle is a housewife obsessed with “Time/Entropy/Chaos and Death” (117).  The experimental story takes place over a single normal day as she prepares her children for a birthday party.  She sees everything as slow entropic decline, notes scattered around the house fight off the disorder, she imagines her children with teeth decay, endless Russian dolls ad infinitum… She imagines all landscapes transformed into California, some geographic cosmetic surgery.  The sense of entrapment and growing existential despair cuts deep.

The often beautiful and evocative prose combined with pairing of metaphysical with everyday, the interweaving of the metaphysical as the everyday, is a joy to read.  It is a dying shame that Zoline was not more prolific.  Will be in the top short SF works I have read at year’s end.

“Coranda” (1967) novelette by Keith Roberts, 3/5 (Average):  I reviewed Moorcock’s The Ice Schooner (1969) and thought it was an average adventure story in an intriguing world.  According to Moorcock’s intro to the story Keith Roberts, of Pavane (1968) fame, was so intrigued by the story serialized in New World’s sister magazine Impulse that he decided to write his own story in the same world.

And it is no better than Moorcock’s vision.  The world is fantastic but is more due to Moorcock’s original formulation rather than anything Roberts adds to the template—a vast ice flow with small cities lodged in the clefts, few resources means that everything is used and reused, ships with runners skid across the ice in search of food, and the Ice Mother–the embodiment of the harsh world—is a harsh goddess who controls all.  A woman by the name Coranda, who rules in the cleft cities, sends out intrepid men in search of the horn of a narwhal.  The sacrifice to the Ice Mother will be made.  Blood will be shed on the ice.

“The Soft World Sequence” (1967) poem by George MacBeth: I am not going to rate this SF-esque poem.  The dominate image of the first part involves staring upwards at the vagina—“crossing her flesh legs / over the glass eye / in her groin.  Glassily it stared / at his own eye […]/ like the lips of an octopus”—of a woman sitting on a glass chair.  Take it as you wish.

“Kazoo” (1967) shortstory by James Sallis 2/5 (Bad):  A mercifully short, highly oblique story which does not seem to contain speculative elements.  The narrator is beset by a man who supposedly wants to attack him.  A crowd grows, some playing musical spoons, others picking pockets, beggars, street musicians with monkeys.  There is a certain joyful spontaneity about it all—although it appears to all be some drug-induced cacophony.

“Integrity” (1964) shortstory P. F. Woods (i.e. Barrington J. Bayley), 4/5 (Good): “Ah can look after mahself” (163).  So it goes in this future, guns rule the streets, some disturbed wet-dream of individual freedom—technology requires only one hour of labor for each citizen to keep the institutions going.  Joe seems to remember something about the past, or at least is able to see fragments of how it really is in the present, and how it was and conjures a mechanical device to see more of the world.  Individual freedom is all a ruse but not in the way you would expect.  Well-drawn world despite the short length, evocative images, intriguing descent in to the metaphysical…

“The Mountain” (1965) shortstory by James Colvin (i.e. Michael Moorcock) 3.5/5 (Good):  Moorcock’s story has a thematic core similar to the much less satisfying “In Passage of the Sun.”  In a well-wrought allegory, the only two surviving people after some apocalypse wander across the mountains of Lappland in search for a woman they might have seen but probably does not exist: “they had known themselves, perhaps instinctively, to be the last two human-beings alive, until Nilsson found the girl’s tracks coming from the south and heading north” (179).  The possibility that she might exist results in ridiculous feats of endeavor (crossing mountains, etc).  Mankind’s desire to conquer rings hollow when death is the only possible outcome. 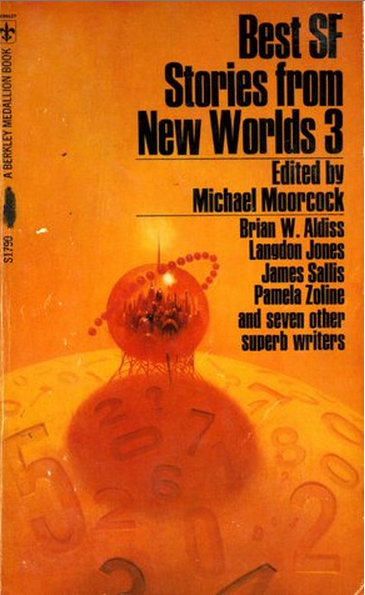