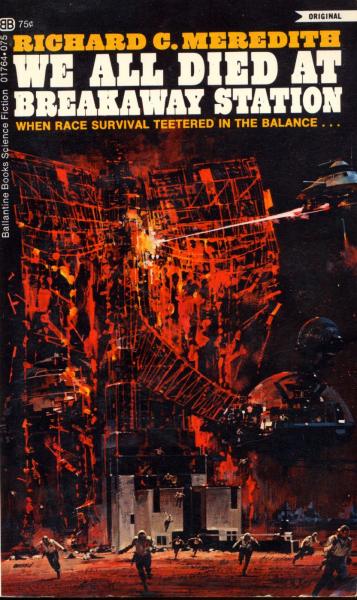 Automated machines rummage through the wreckage of a spaceship—after a battle with the Jillies—gathering the human dead and placing them into cold storage, to be stitched together again for another fight.   Absolom Bracer is one of the casualties of Earth and its colonies’ war with the a vaguely known alien foe (the before mentioned Jillies) doing their “damnedest” to “eat up every crumb” of the “apple pie” (as sophisticated as a Richard C. Meredith gets)  (192).  Captain (eventually Admiral) Bracer of the warship Iwo Jima after his death becomes one the resurrected—“a shiny meter-tall cylinder of metal supporting what was left of the upper torso of a man” (9).  What remains are a “few bones, a little living flesh and muscle” and most importantly, “a collection of tangled nerves that continually throbbed their pain, their loss” (9).

On Earth these resurrected men and women can be transformed into something “that would pass for a human being” (9)—physically at least.  Unfortunately, Absolom Bracer and his crew and the captains of warship Pharsalus and hospital ship Rudoph Cragstone and their crews are not able to return to Earth.  Rather, as the title indicates, they join the ranks of “Leonidas and his Spartans, and Horatius of the bridge, and Barrett Travis and Jim Bowie and Davy Crockett in Texas [et al]” (2)—as in, they die fighting the good fight.

Insert standard space opera plot.  Too alien to understand aliens are evil and hate humans.  Evil aliens have the upper hand and threaten to break the link, a “tenuous FTL communications chain,” maintained by Breakaway Station from Earth to “the colonial worlds of the Palandine, a link in the chain that defied the Einsteinian universe” (1).  The importance of Breakaway station and its operation is by far the more important elements of the novel.

In this future even the individuals with horrific injuries can be resurrected with extensive prosthetics, artificial organs, artificial skin, etc.  Due to the intensity of the war and Earth’s weak position the dead are “resurrected” in this fashion to fight again. Absolom Bracer and his ships are make the difficult decision to stay in defense of Breakaway station rather than return home for a more complete repair.

Insert standard space opera info dump: Jillies are humanoid, “if by humanoid you mean a creature with a central, upright body, two upper appendages, arms, two lower appendages, legs, and a brain and sense organ housing head above the central body” (66).  What makes them so unusual are their “two-part bodies” (67).  The second body is formed from the gastro-intestinal track and has a rudimentary brain.   Jillie society is characterized by fierce clans,  They have both sexual organs.  They are autocratic and have a penchant for dissecting the human colonists they encounter.  They are alien and evil.

Absolom Bracer’s decision to ask his captains to remain at Breakaway Station revolves around the expedition of Fleet Admiral Albion Mothershed whose scout pilots might have finally uncovered the location of the Jillies’ homeworlds and thus the key to the war.  However, his fleet is heavily damaged from a battle and needs reinforcements which are slowly moving from Earth.  Bracer and his crews must overcome their intense depressions, pains, and confusion about their place in a world which forces its dead to fight again and do what is right!

We All Died at Breakaway Station (1969) is an action-packed space opera in the “traditional” mode: evil aliens are evil and hate humans because they are too alien to actually understand.   The novel almost has the feel of an expanded short work—the majority of the added narratives are fragmentary and focus mainly on titillating content that add little or nothing to the rest of the story.  You know, ramblings about the “wildest girl in Nortlan” and her sexual escapades (46) and and Damion Leto and his sex tribe who quickly get a copulation session immediately after seeing the alien bombs fall (85).

On the whole Meredith’s gender politics are egregious.  That said, the work does have a scenario rather uncommon for 60s SF—the war effort has resulted in both men and women drafted en masse into the armed service and not simply support staff but even command officers.  By the end of the novel two of the three captains are women: Captain Zoe Medawar, who was promoted before Absolom Bracer’s defense of Breakaway and  Captain Lena Bugioli, who is promoted to the post by Bracer after her role in the suppression of a mutiny.  Both are of the reconstructed dead variety, possessed by drastic physical disability.  However, none of these women in positions of power based on their manifest and manifold merit are focused on.

Instead, the women characters who receive more than a handful of paragraphs are purely possessed by their sexual desires and play the standard role as cyphers of male fantasy.  For example: Comm Tech Sheila Brandt has sex on duty that results in a court martial and Lieutenant Naha Hengelo spends most of the time naked in a scout ship in the arms of her much more competent lover Lieutenant Commander Kamani Hybeck.  Meredith includes a plethora of women characters (including those of color) but all who act virtuously in the face of great adversary are relegated to the fringes.  Why Lieutenant Hengelo is included on the mission is never entirely clear other than a source of sexual gratification for the Lieutenant Commander cooped up on a long, dangerous, and vitally important expedition

Readers of my site will know that We All Died at Breakaway Station is not my normal fare.  But, I understand completely the allure of space opera the occasional desire for stories with rigorous and simplistic plots and themes.  Unlike a lot of space opera without character depth, We All Died does attempt (although unsuccessfully) to get at the psyche of the decrepit officers and their purpose in a war in which they have already died for their cause.

Vaguely recommended ONLY for fans of 60s space opera of the more military SF variety.  Everyone else with be disappointed. 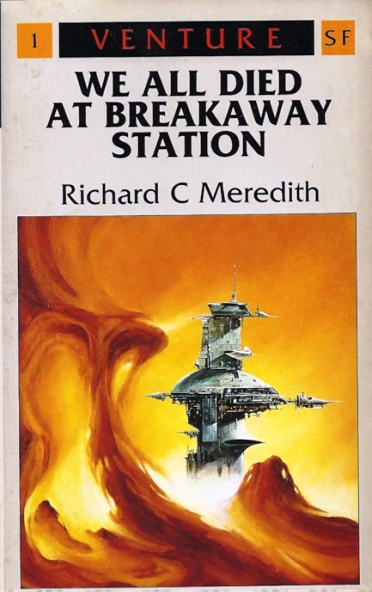 34 thoughts on “Book Review: We All Died at Breakaway Station, Richard C. Meredith (1969)”