I bought and am in the process of reading a novel from the 90s… Look below to find out which one! (SHOCKING).

Also, more in line with my common (recent) reading patterns, a lesser known but supposedly brilliant 70s novel, Interface (1971) by Mark Adelard.  According to SF Encyclopedia: “The series is set in a city of the Near Future.[…] With a rich but sometimes sour irony, and a real if distanced sympathy for the problems and frustrations of both management and workers, Adlard plays a set of variations, often comic, on Automation, hierarchical systems, the Media Landscape, revolution, the difficulties of coping with Leisure, class distinction according to Intelligence, fantasies of Sex and the stultifying pressures of conformity.”  The banal back cover description indicates a rather lesser novel than Clute’s praise…

And, well, I’ve never Moorcock’s SF/F but, perhaps my first collection of his short fiction will indicate what people claim he is capable of.

All but the last novel came via Carl at Stainless Steel Droppings on his book store trip…. Thanks again!

(Paul Alexander’s cover for the 1977 edition)

From back cover: “WORLD WITHOUT WANT—OR DESIRE— The Twenty-Second Century is a time of plenty; food, clothing, shelter, every entertainment and diversion—no matter how exotic or erotic—all are available for the asking.  Technology’s promise of limitless, automated abundance has at last been fulfilled.  Sound like Paradise?  It is a NIGHTMARE!” 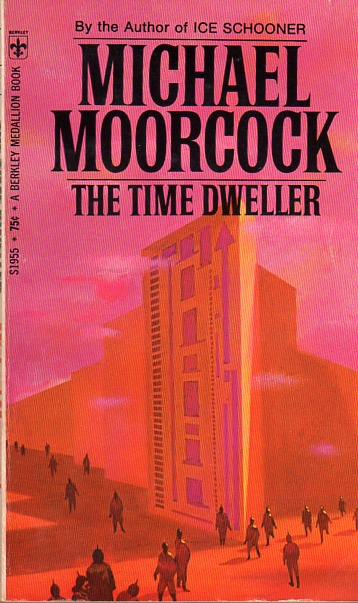 From the back cover: “TIME OUT OF MIND.  The Earth rolled, salt-choked, round a dying sun.  On its bleak inhospitable surface the last lonely remnants of mankind resigned themselves to extinction.  Time, it seemed, had run out for humanity.  Yet Time itself held the key to survival.  If man was to be supplanted from his native planet, perhaps only infinity would afford him a refuge.  Only the age-long clichés with which his mind was fettered barred him from a whole new dimension—and a future of unimaginable splendor.  J. G. Ballard has called Michael Moorcock” the most important successor to Mervyn Peake and C. S. Lewis.” 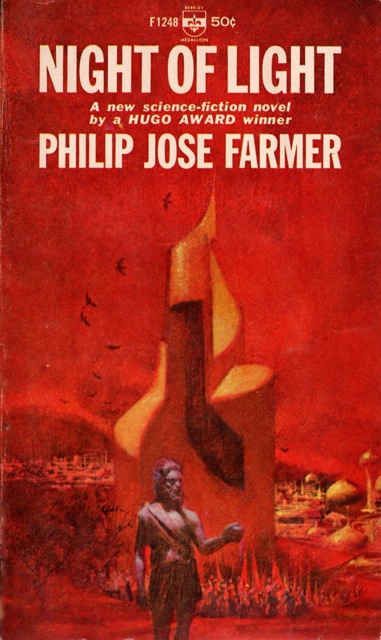 From the back cover: “On earth it would be a fearful thing to see a man chasing down the street after the skin from a human face.  On the planet of Dante’s Joy the sight aroused only mild wonder.  Then too no one was surprised by the cottonwood, which to the naked eye looked like a tree—but on closer inspection was found to be a man, frozen forever in wooden flesh.  But the strangest of all was the Night of Light, when all the citizens of Dante’s Joy slumbered, only to awake, if at all, in a world even weirder and more unearthly than before…”

From the inside flap: “Many centuries in the future, the Nightingale embarks on a noble mission.  The most advanced starship of the Gentle Order of St. Francis Dionysos—a benevolent religious sect which, alone, retains the ability to journey between worlds—the awesome craft must transport home hundreds of alien refugees who were flung to all corners of the universe by the devastating War of Ignorance.  And in command is the Gentle Order’s most admired and capable pilot—Senior Confrère Jon Wilberfoss.

Then suddenly, inexplicably, the Nightingale vanishes.  For a full year there are no clues to its whereabouts.  Until finally a distress signal is heard—and the great ship is discovered in ruins, completely devoid of life save for its captain, left nearly comatose by guilt and self-loathing… and damned as a heinous murderer by the masters of his Order.

WULFSYARN is the extraordinary story of the final, fateful voyage of the Nightingale and of the life, torment and ultimate redemption of Jon Wilberfoss—a complex, enigmatic and fatally flawed man of principle responsible for the gargantuan mercy ship… and the inevitable destruction of its crew and alien passengers.  It is a brilliant mosaic of bizarre life forms in a vast and incomprehensible universe, of a future both radiant and terrible… and of the glorious frailties of the imperfect human animal—related in stunning detail by an intelligent and sympathetic machine skilled in the craft of words and images: the autoscribe called Wulf.”