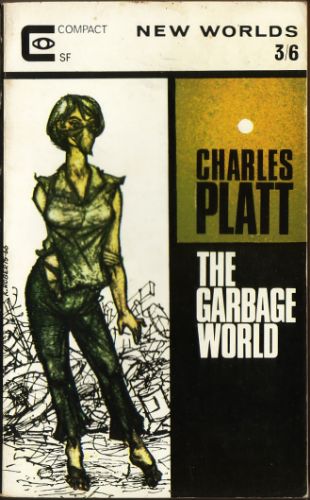 In 1980, 3,000 copies of Charles Platt’s SF novel The Gas (1968)—in which, the “eponymous gas, accidentally released over England, works as an irresistible aphrodisiac […]” and, according to John Clute at SF encyclopedia, contains “sex material” in “transgressively pornographic terms”—were seized by UK’s Director of Public Prosecutions in effect preventing a UK distribution [article].

And the rest of the silly novel… Garbage World dolls up a plot rudiment straight from the pulps with a distinct patina of mud and mire.  Nice Oliver Roach and his evil villain colleague “Minister of the Government of the United Asteroid Belt Pleasure Worlds Federation, Zone Two, Commander of the Imperial Survey Craft” (9) Larkin are from the clean astroids.  These men fetishize the clean and bathe compulsively.  They arrive at the astroid of Kopra, which is the astroid belt’s trash heap, to ostensibly avert a catastrophe.  Kopra has grown from a small rock to a giant veritable ball of trash with jungles and yellow rain: “a century’s worth of refuse has accumulated here, and the layer is now more than ten miles thick in places […] This vast layer is only held in place by a three-quarter gee field from an obsolete, malfunctioning generator” (12).  The goal, replace the generator to prevent the astroid from falling apart because…

…an entire society of trash dwellers—who plod across the squalid, mushy, and smelly trashscape—eek out an existence tracking down the trash “blimps” lobbed over from the other astroids.  The new trash in the “blimps” provide food and the status providing “cool” trash fragments that form each man’s horde.  The man with the largest horde rules the town.  Evil clean man Larkin has other plans of course—to streamline the astroid belt’s trash problem.  And, he can’t get over how dirty everyone is: “You seem to see these slimy creatures as human beings, rather than the offensive vermin they really are.  They are not men” (107).

Soon, as Oliver’s last name (dirty insects are the best insects) indicates, his dirty interior takes over and his cleanliness fetish disappears.  As is so often the case, Oliver wants to get the girl.  But, first, he must grapple with the fact that Juliette is covered (literally) with trash.  As they trek across the trashscape looking for trash nomads, fighting giant trash slugs, falling into giant vaginal trash chasms, Oliver has a revelatory trashgasm of belonging and love and well, discovers he has a thing for oozy trash mud:

“He had to admit it.  He could never go back to the clean life, now.  Not anymore.  Never again.  Lying in the mud, in the gentle sun, he picked up a handful of ooze and squeezed it out between his fingers.  He rubbed it over his arms, smooth and warm.  He wiggled his toes in it and felt its gentle touch all over his body” (95).

What is Platt’s purpose in all of this?  Why did Michael Moorcock serialize Garbage World in the highly influential New Worlds magazine?  Other far superior authors of the day played with and subverted the SF trope of a clean/sterile future.  For example, Brian W. Aldiss in The Dark Light-Years (1964)—another highly problematic novel—posited a sentient alien species which spent their days copulating, laying around, and eating in their own filth.  Humankind is confronted, and bewildered, by these aliens.  And again in “Legends of Smith’s Burst” (1959), Aldiss took a Vance-esque planetary romance story but filled the worldscape with filth and decay, elements the human hero can never come to grips with.

Platt attempts to chart similarly subversive waters.  At the core Garbage World is a SF juvenile: morally upright man encounters and wins woman and saves the planet.  But, here the world worth saving is a ball of trash, and everyone on the planet is covered with trash, and governs the entire social structure of the society—like Aldiss’ aliens in The Dark Light-Years, Kopra’s inhabitants revel in their environment.  Consciously or unconsciously, Platt conveys the entire work in the vocabulary of a SF juvenile.  The language is simple, clunky, and superficial.  An intriguing exercise, but ultimately, Garbage World is about as engaging as finding a fecal remnant left by my cat which just missed the litterbox.  Darn cat.

For more reviews consult the INDEX 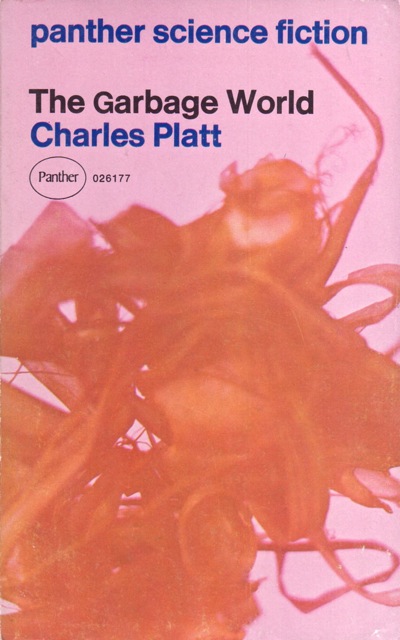 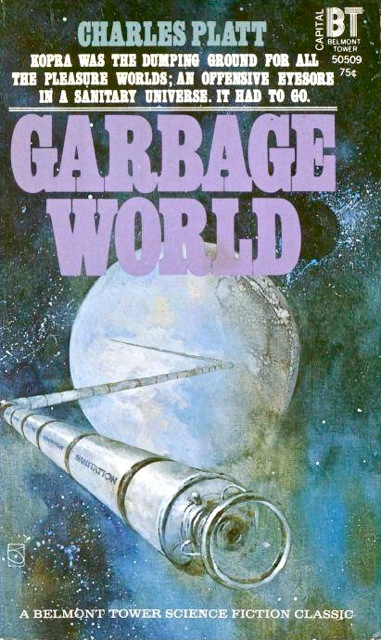 (Uncredited cover for the 1967 edition)