Two more novels via Carl V. Anderson over at Stainless Steel Droppings—thanks again!  … and two I’ve had laying around for a while.  My Malzberg solo SF novel (non-movie novelization) collection is complete!

Eventually I might read a select few works from the 80s, if I do Gene Wolfe will be at the top of the list. His short fiction from the 70s has wowed me so far (here and here).

From the back cover: “Halma… where humans were ruled by a race of effete and arrogant Lords… where a feudalistic system banned all work by machines… where a “benevolent welfare state rewarded talented hand labor with only barely adequate sustaining doles.

Young Ghyl Tarvok, fascinated by the land of Emphyrio, became a rebel.  In a pirated space ship, he began his search through the civilizations of neighboring planets for the key to the origin of his home world’s culture and the secret that might change it.  Inexorably he moved toward the last desperate hope: the planet his ancestors had left many thousands of years before—the mysterious and terrifying place called Earth.”

From the back cover: “Severian was born into the ancient guild sworn to torture and kill on command.  His is the story of a time so many millions of years hence, that all present time is forgotten.  It is a tale of a Torturer, fallen victim to love and made to wander through a world where magic and science are one.” 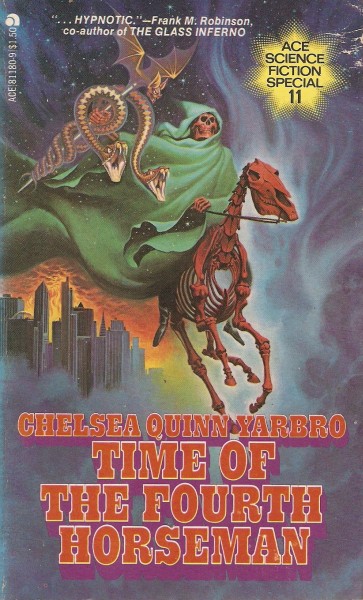 (Davis Meltzer’s cover for the 1977 edition)

From the back cover: “Twenty-first century medical science has wiped out all the deadly diseases.  Yet in a large American city patients have begun to come in with smallpox, diphtheria and all the other enemies that were supposed to have been defeated forever.  No one but the highest government officials are aware that this American city has been chosen as a “moderate” experiment in population control…” 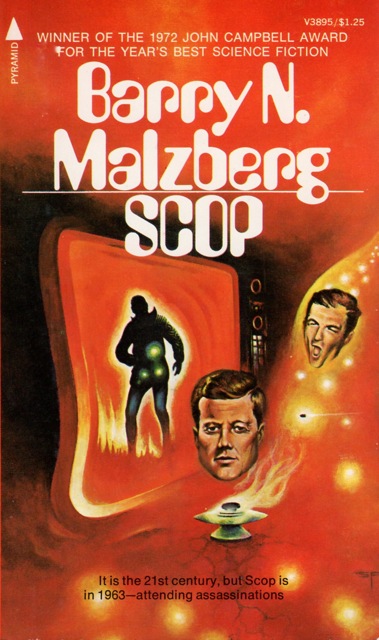 (Stephen Fabian’s cover for the 1976 edition)

From the back cover: “Bitterly, Bitterly, Scop Is A Failure!

Scop is doing his job…  He has spoken to President Kennedy, warning him to leave Dallas immediately… spoken to Zapruder, asking him not to take pictures… pleaded with Elaine Kozciouskos, begging her only to scream, he has even fornicated her—part of the job,  In spite of the pain, he has witnessed, on location, the last minutes of Jack Kennedy, King, Malcolm, Robert Kennedy—all for the fate of mankind.  But bitterly, bitterly, he knows he is a failure.  Scop, trying to alter, has merely reinforced the future…”