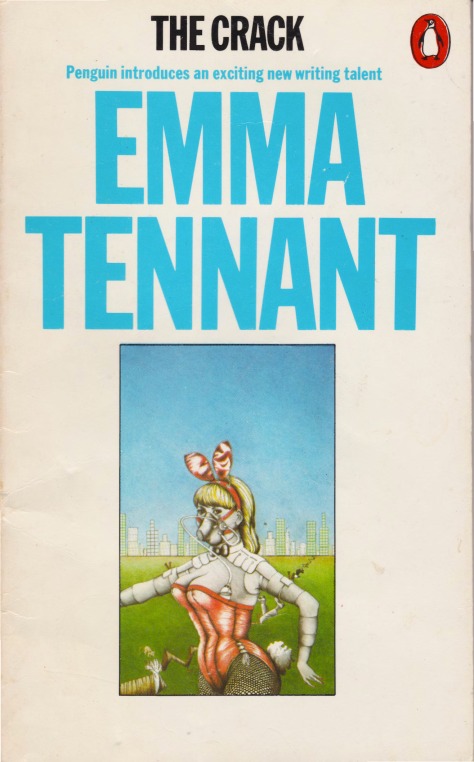 Emma Tennant’s The Time of the Crack (variant title: The Crack) (1973) takes the form of a series of character vignettes in a transmogrified London. Despite Tennant’s wide-ranging societal critiques,  it’s a brief book–my 1978 Penguin edition clocks in at 112 pages–threaded loosely together by the occasional presence of Baba, a Playboy bunny. The cataclysm in question, the appearance of an expanding crack under the Thames, although causing devastation, doubles as a metaphoric birth moment. The landscape modified, buildings contorted by the severance… And in the wreckage of what remains the survivors make postures towards all manners of “New” English societies formed by nostalgias and repressed Freudian desires. Via the fantastic, the “schizophrenic society” (25) of contemporary England opens before us. A panorama of empty idealisms and a powerful past that doesn’t quite allow its denizens to form anew, even in the face of disaster.

As the survivors struggle to find their bearings post-cataclysm, the potential of the Other Side of the chasm becomes a tabula rasa of projected possibilities. Beyond the chasm’s shores awash with “primeval slime” (62), the Other Side throbs with every manner of nostalgic/idealistic potential. Medea, a onetime clairvoyant and palmist, relentlessly broadcasts her message of radical liberation:

“The River is exhausted, the banks are wide /  A new life for women on the Other Side” (69)

Some revel in the new world. The psychoanalysts Thirsk and Harcourt watch gleefully as their adult patients, now in a state of childlike regression, wreck havoc and literally return to the mud: “Happy in their exploration of a new environment. An opportunity, without nuclear family relationships, to form new life structures” (47). They justify their actions behind the veneer of “scientific” intellectualism. Baba appears to be the only one who seeks to return to pre-cataclysm society rather than regenerate some idealized past that cannot be.

The interplay with historical texts and figures intrigues me the most. Jeremy Waters, an ecologist and anti-pollutionist, in his quest for a Communism without dictators, must “fight the Robinson Crusoe in him” (55).  Running across the primeval mud in her bunny suit, Baba, revealingly, ruminates on “Robinson Crusoe” and “she had always so much preferred the Swiss Family Robinson” (80). Courvoisier, dreams that his future expedition across the chasm will be more “momentous even than Captain Scott’s” (44). He imagines the diaries of his future adventures bound “hard-cover edition, leather of course, with a golden tassel for a marker”  (44). Even his lusts take on nostalgic (and creepy) shades: as Baba runs towards him he imagines her as “the Venus of the drained river-bed,” with a tail that reminded him “of the Beatrix Potter books in his château nursery” (45). Nostalgia as warm and cozy and something to escape into, nostalgia as road block for progress.

I must confess, there’s a localization of critique based on social and cultural geographies of 1970s London that, as an American, escape me. For example, Jeremy Waters remembers daydreaming in his “conservatory in Hampstead” about how he and Greta (his wife) “would have a little farm of their own and be entirely self-supporting” (28). Of course, Hampstead now mutated by the crack, rises in all manner of oblique angles. Place names abound (Regent’s, the Serpentine, etc) and I suspect Tennant selects them deliberately.

I recently discussed in my post about Tennant’s fiction how she found inspiration in New Wave British SF authors such as J. G. Ballard. And, at a surface level, The Crack manifests J. G. Ballard’s penchant for cataclysm (The Crystal World, The Drowned World, The Drought) as vehicle to explore interior dissociation. Unlike Anna Kavan’s Ice (1967), which funnels the reader through hallucinatory flights and pursuits and traumas of an individual character (and perhaps, a landscape perceived as apocalyptical by his interior state), the cataclysm in Tennant’s novel lays bare the  “schizophrenic society” (25) to a more general satirical knife.

Tennant’s own politics, or at least what I can divine, seem pragmatic.  In The Crack idealists from all spectrums fail to realize the necessity for survival and instead argue past each other and postulate and speculate and are (often) enslaved. The inability to communicate features heavily in her analysis of society’s ills.

There’s a feminist message that can be sussed out as well… Medea’s radical feminism, although not appealing to Baba who enjoys working at the Playboy and running around in her bunny costume, is beset on all sides by forces of the past (the 1950s woman made mechanical) and the present (the capitalistic Bowlby, the real-estate magnate). Even “enlightened” men throughout cannot escape deeply sexist thoughts  (and actions) regarding women. Waters, despite his so-called socialistic desires of equalitarian communes, has the following first impression of a mud covered Baba running along the bank of the chasm: “Evil womanhood, dragging man down into the abyss since the beginning of time. Women symbolized by the primeval slime; all around her the fallen and ruined Garden of Eden. Woman crawling towards them like a serpent on its belly” (62). The English notion of “cozy-catastrophe,” although on everyone’s minds, does not materialize. Nostalgia for some past golden age is but a regressive and destructive illusion.

Recommended for fans of experimental and satirical 70s SF.