1. I’ve wanted Kōbō Abe’s SF novel Inter Ice Age 4 for a long while…. If you’re curious, check out Admiral.Ironbombs’ fantastic review. I’m a huge fan of Abe’s non-SF works–for example, The Woman in the Dunes (1962). And of course, all the Japanese film adaptations of his novels directed by Hiroshi Teshigahara…. (which Abe wrote the screenplays for): IMDB link.

Tangent: If you haven’t seen Teshigahara’s 1966 adaptation of Abe’s SF novel The Face of Another (1964), you must! At the very least, browse the stills….

2. My second novel by Franke…. and I’m a few pages in and absolutely intrigued–the plot blurb I include below should tantalize virtually any SF fan. Stay tuned for a review (although it might be in a few weeks).

3. Wolfgang Jeschke’s The Last Day of Creation certainly has the most outrageous reason for time travel ever: to find oil. Curious why Brian Aldiss endorsed this so forcefully!

4. A “nightmare shopping complex” in a futuristic city from a Nobel Price-winning French author? Count me in! For those suspicious of categorizing some of Le Clézio’s work as SF, consult his entry in the SF Encyclopedia.

As always, comments and tangents are welcome.

From the inside flap: “From the author of The Woman in the Dunes and The Ruined Map (which John Leonard, writing in The New York Times, chose as one of the six best novels of 1969) comes the gripping and inventive Inter Ice Age 4, perhaps Abe’s most radical work. It is set in the next century, as the polar ice caps begin to melt, threatening to submerge the continents and destroy all terrestrial life. Secretly and illegally, a group of scientists has begun work on a scheme to force biological mutation on animals–and ultimately on the human fetus–to enable mammalian life to survive. The protagonists, Dr. Katsumi, a scientists who has created an information system so advanced that it can foretell human behavior, is drawn unwittingly into the conspiracy. As he gradually–risking his life–ferrets out the precise nature of the experiments in which his skills have been enlists, he is forced to choose between his desire for the survival of the human race and his horror of the ruthless and manipulative means by which that end is to be attained. The philosophical choice is translated into a matter of desperate personal immediacy when he discovers that the conspiracy poses a direct threat to his wife and unborn child.

In Inter Ice Age 4 Abe employs the devices of science fiction to project his most profound moral concerns.

(Ivan Paslavsky’s cover for the 1974 edition)

From the inside flap: “Special Bulletin: This morning at 3:00 A.M., the Free World launched the most significant project in its history. The land mission initiated by the United Commonwealths was completed at 4:26 as planned. The goal: integration of Zone Null and the clearing of the contaminated area. The inhabitants of the area–those living in oppression in the cities, hermetically cut off from the outside world–will be freed from the chains imposed upon them by the present ruler.

Silent and impregnable for so long, the vast expanse of Zone Null has at last been penetrated by the Free World. An expeditionary force of military men augmented by a team of specialists–Dan the cyberneticist, Paul the sociologists, Greg the linguist, and others–have passed through its mysterious defenses only to discover crumbling, abandoned cities and massive disintegration. The conquest seems complete and the Free World finds within its grasp final victory over repression, exploitation, and slavery. For Dan, separated from the team and lost among the cities of Zone Null for a time, the success of the invasion is by no means so certain. His encounter with Zone Null’s ultimate technological society of total welfare and absolute security might have been real but it left dangerous questions just the same. Had be become something sinister, tainted by the strange world from which he had returned? Had he made the fatal discovery that the achievements of civilization in Zone Null were the same as the goals of the Free World was striving for and for which it had destroyed its silent neighbor?” 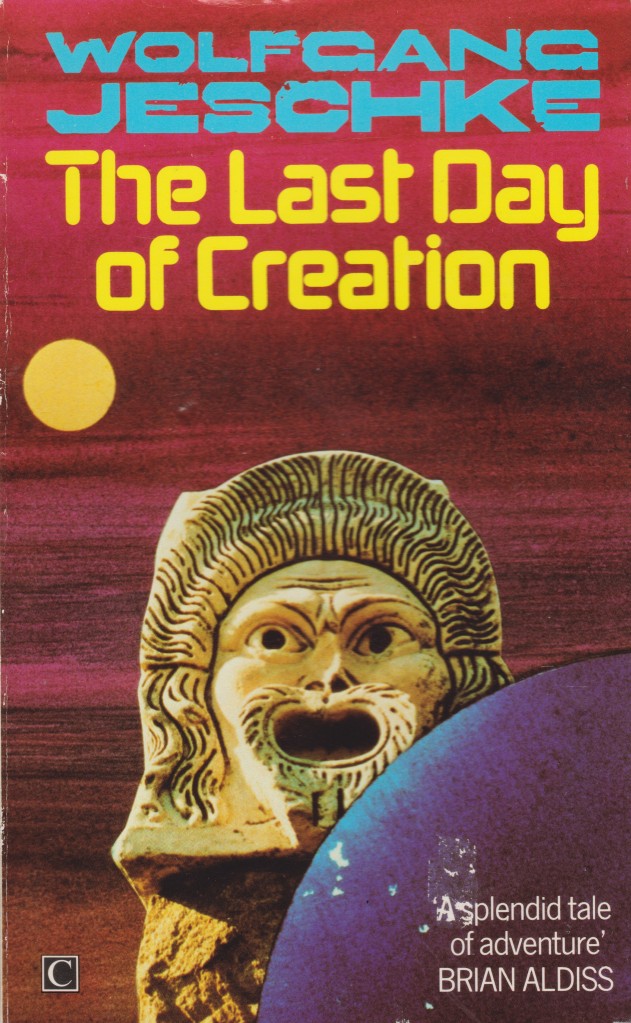 From the back cover: “Strikingly original, excitingly written, The Last Day of Creation is based on the premise that sometime in the near future time travel becomes a reality and the US Army and Air Force sends a task force into the past to pump oil from the Middle East into the present. The experiment goes horribly wrong; not only is the time travel process a one way ticket, but other visitors from the future have arrived before them. The task force is stranded in a garden of Eden suddenly polluted by the technology of modern warfare. Their only allies are the primitive half apes/half men from whom they are themselves descended. The Last day of Creation comes with an impressive endorsement from Britain’s foremost science fiction writer, Brian Aldiss.”

(Diane Simmard’s cover for the 1975 edition)

From the inside flap: “Upon an immense stretch of flat ground at the mouth of a river bathed in sunlight, gleaming against an extraordinarily intense blue sky, rises Hyperpolis. It stands there in the scintillating landscape, surrounded by its four asphalt car-parks, to condemn us–huge, enveloping Supermarket. We are under attack in The Giants. Each of us will discover a trace of resemblance or perhaps a clear reflection of ourselves among the characters who move mindlessly about Hyperpolis. Like Le Clézio’s powerful and terrifying last novel, War, The Giants is a book about rebellion. It is a call to re-awaken a world which has willingly sunk into an unhealthy stupor, a warning to be liberated before it is too late: “Free yourselves! It is high time! The great cancer has escaped from the hangers where it was imprisoned and has begun to seep into the public squares and wastelands. Not is rising in the air like a fifteen-story building balanced on concrete columns. It you wait any longer you will never see the sky again.”

Le Clézio has been hailed as one of the most exciting young writers since Camus. He is a bold and inventive stylist whose intoxicating use of language gives even what is familiar a strange visionary essence.”