On the night of 20-21st of August 1968, the Warsaw Pact countries (led by the USSR) invaded Czechoslovakia ending the period of liberalization known as Prague Spring. And with it, the Czech New Wave film movement “ended.” Regardless, Karel Kachyna filmed The Ear (1970), a paranoid psychological thriller redolent with New Wave stylings, that brandishes a proverbial middle finger in the direction of the Communist Party. Unsurprisingly, the film was promptly banned until 1989, and Kachyna moved on to far less confrontational and intense projects.

The Ear is a nightmarish concoction that takes place over a single night and early morning.  Ludvík, a minor Prague Communist official, and his alcoholic wife Anna, arrive home from an official Party reception and discover that things are not as they seem. Not only is their power out but unknown government agents wander their garden. As they huddle in the rooms that are not supposed to be bugged, they attempt to decipher the political implications from the fragments of conversation they remembered from the party. “The Ear” of the state listens in, the disagreements and tensions of their marriage are exposed…. While Anna hurls insults at her husband’s cowardice (and “The Ear”), Ludvík roams in a world of flickering candle light with a caged anxiety that threatens at any moment to lash out. He roves his house burning documents in his toilet, peering out of his windows at and the lighted houses of his neighbors and the car parked down the street that occasionally moves without its headlights.

The series of flashbacks, remembered through a tipsy and disoriented haze, gradually reconstruct the order of events before they arrived home…. the colleagues taken away, half remembered conversations in rooms bespectacled with animal heads, the archaic rituals of power transpiring in mysterious grotto-like spaces filled with cherubs, all redolent with the sweat and paranoia of half-understood party machinations.

Here is a linked sequence of those memories: 1) Decaying textures and cherubs 2) Cabals 3) The man with a flashlight 4) Spectral sculptures. 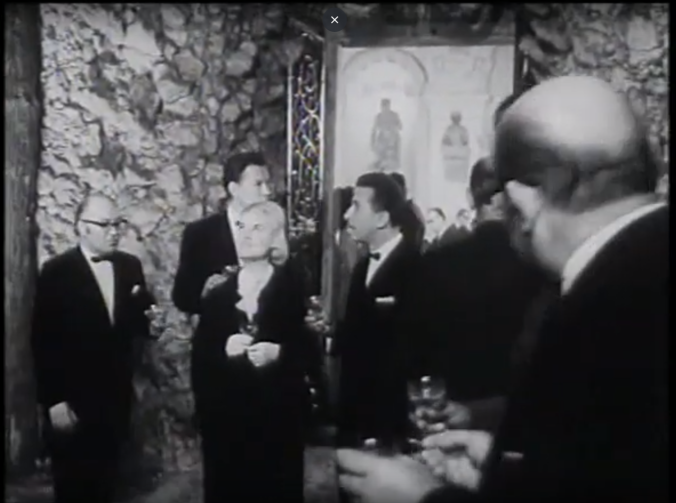 In these flashback moments, the cinematography and editing of The Ear excels. Sometimes we see from the eyes of Ludvík as he moves from place to place in the crowds and claustrophobic spaces, as his eyes scamper from face to face, trying to figure out the implications of every glance, of every oblique discussion…

Jarring images are deliberately paired. The editing is a key component of the disorienting storytelling. Here is my favorite sequence (I skipped a few “cuts” in this sequence): 1) Ludvík asks “Who”? 2) His eyes move towards a man tossed in the air 3) The audiences laughing 4) The revelation that the waiters are really spies.

What is Ludvík and Anna’s fate in the constantly shifting world of surveillance and veiled threats? And how long will he last in the halls of power when every conversation is recorded and dissected? When his personal and professional failings are all on file? Can their marriage bear the strain? Karel Kachyna provides a devastating answer, and one the authorities didn’t want to hear….

Note: for more on Karel Kachyna see his obituary.

For more (much older) film reviews consult the INDEX