(Paul Alexander’s cover for the 1978 edition)

After finishing John Morressy’s Frostworld and Dreamfire (1977), I tracked down another volume of his Del Whitby sequence. Although far from as engaging and emotionally affective as the former, Under a Calculating Star (1975) provides the historical background to the Morressy’s weirdly primitive far future world: the origins of the Sternverein (the dominant business polity), the explanation of why swords and knives are the weapons of choice while high-tech spaceships roam the interstellar expanses, and the role of Old Earth in the colonization of the far flung reaches. Historical content aside, Under a Calculating Star‘s plot and characters fail to engage and the worlds and societies are one-dimensional in comparison to Frostworld and Dreamfire‘s metamorphic Onhla and the planet Hraggellon, locked in its unusual orbit.

Recommended only if you enjoyed Frostworld and Dreamfire (1977) and want to know more about Morressy’s universe.

Under a Calculating Star‘s basic plot is divided into two distinct sections. Part I focuses on Kian Jorry’s attempt to acquire Leddendorf’s treasure (the founder of the Sternverein) in the ancient citadel on Broq-Thaddoi with a crew of humanoid aliens with unique talents. Part II takes the reader to the planet of Xanchos, where various groups of humanoid slaves have rebelled against their masters. While the power at the top has been rearranged, those at the bottom remain oppressed. The universally maligned Quespodons, led by one of Jorry’s crewmen Axxal, are liberated from their new masters and learn the secret as to why their race has “allowed” itself to be enslaved across the galaxy. While the main characters link the disparate sections, the general theme of the intricate schemes and mechanisms of liberation and oppression,  tie both together.

The entirety of Part I feels like a poorly moderated D&D adventure where the DM tells you in a droning, sleep-inducing voice, the next bland challenge–dangerous plants, a steep cliff to climb, etc. You role some dice, a character dies, but as no one in the group has any emotional attachment to their character, their eyes glaze over waiting for the mission’s completion…. It reads like a halfhearted afterthought, a formulaic quest to introduce the main narrative. Interspersed are sections describing the history of the Morressy’s future (discussed below) that momentarily jolted me from the banality. In addition, the intense racism the Quespodons have experienced as the galaxy’s beasts of burden (4) indicates the narrative core of Part II. Eventually Jorry, a k’Turalp’Pa whose sole pleasure was “to plan” grand quests and conquests (27), and Axxal, a particularly intelligent Quespodon, escape from the citadel of Broq-Thaddoi with a few pieces of the Leddendorf treasure.

I found Part II far more engaging. Jorry and Axxall arrive on the planet Xanchos after a transfer of leadership. The new king, Gariv led a rebellion of slaves yet maintains control over his onetime allies. While Jorry schemes to acquire Gariv’s wife, Axxall, who for many generations has not returned to his home planet, learns how the atmosphere of his own planet stunted the intellectual growth of his people. He begins to plot his own liberation movement and rewrites his people’s past.

I finished Under a Calculating Star due to the historical context fragments that give heft to Morressy’s future universe.

Origin Stories: One of the main themes of the novel is the power of the origin story–the racial narrative that propels its adherents across the galaxy or justifies their enslavement. While Jorry, with his endless scheming, lives the established story of his own people, Axxal rewrites the narrative of his people’s past. The reflexive looking back to move forward, allows Morressy to interject origin accounts of his own imagined future. For example, we learn the backstory to the polity that holds the most power across the galaxy, the Sternverein: it was founded by a man named Leddendorf, who convinced his chief rivals to “join him in forming a trading league with their own private security force” (8). An East India Company of the future!

In addition, the pairing of primitive technology common on most planets (knives, beasts of burden, a lack of engines) with complex intergalactic ships is explained: the first pioneers fled Old Earth in “foolproof” spaceships with “no knowledge of their vessels’ operations” (81). When they landed on alien worlds they “rejected the history that had driven them to the stars” (82) leaving their children with spaceships but no knowledge of how to pilot them. While the Sterverein and others might still use them hundreds of years later, they do not know how they function and do not build new ones. [I find this entire concept illogical and hokey.]

On the various human colonies and among the humanoid aliens, despite the presence of spacecraft that occasionally land on their planets, the drive to create new technology of learn how old technology works does not exist. Morressy’s universe is one of decadent miasma, the cycles of power and defeat, liberation and oppression, repeat themselves in endless variation. Axxal, desperate to break free from strictures placed on his people and fascination with the workings of the spaceships he crews, possibly represents a pivot point in Morressy’s future. 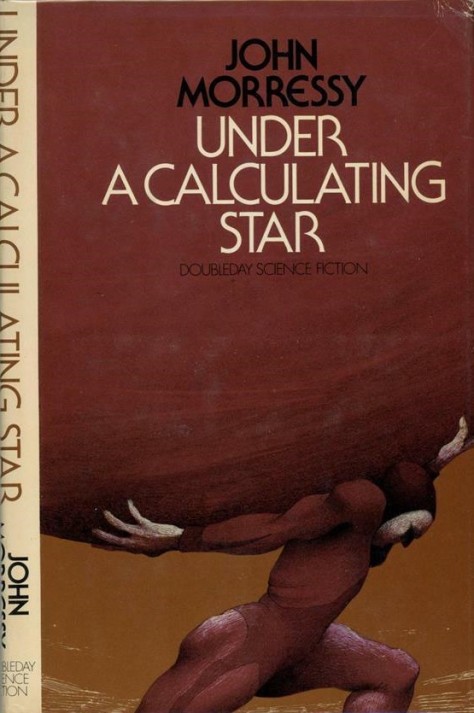