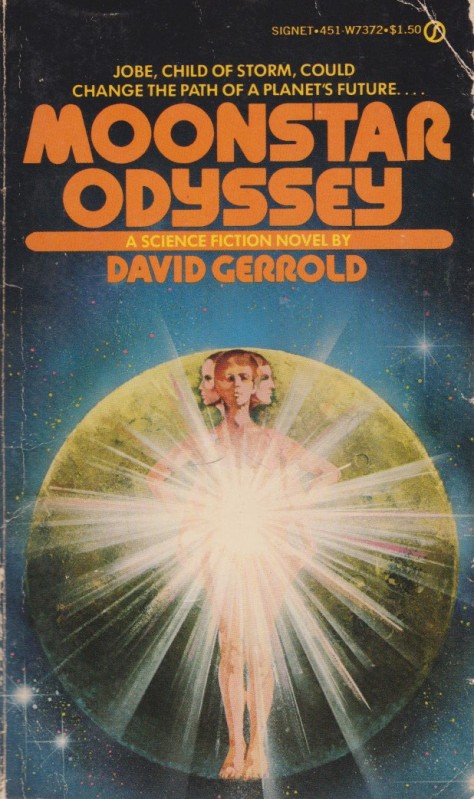 David Gerrold’s Moonstar Odyssey (1977) is a careful and introspective reflection on identity and gender set in a fascinating world made habitable by terraforming.  While the back cover suggests the presence of a driving narrative–the fulfillment of a prophecy propelled by a catastrophic cataclysm–instead, Gerrold’s novel is a bildungsroman that follows the self-realization of a precocious child named Jobe.  The dominate struggle that forms the core of the novel is “The Choice”–the moment in a young person’s life when they chose to move from their androgynous state to either “Reethe [or] Dakka, between female and male” (11).

Considering how unknown the novel remains, I suspect the adult content of Moonstar Odyssey’s complex parable (adolescent sexuality and overt parallels and commentary on 70s societal views on homosexuality and transsexuality) frightened readers expecting a more traditional story. This is a radical vision for the 70s (and in many ways considering current debates of transsexuality, the present)–a clarion call for acceptance and love regardless of one’s sexuality.

The planet Satlin was a barren and cratered rock without life and “almost totally lacking atmosphere, and bathed by actinic radiation strong enough to kill” before a long-term terraforming project (31). The project, still continuing 500 years after human settlement, involved crashing icy asteroids into the surface, freeing groundwater, introducing plants and microbes, constructing 14 vast shields to protect the inhabitants from radiation, etc. The current map of the planet shows “more than half a million small islands dotting the seas like stepping stones; many of them are shaped like crescents—the map is a swirling pattern of loops and circles, the legacy of the planet’s cratered past. Larger craters have become long circular chains of mountainous islands sketched around peaceful seas” (34). The map (see below) included in the novel gives a good impression of the landscape (*).

On the island of Kossarlin, Jobe is born in the middle of a storm: “My birth was a day of storms and other ill omens, and I believe that my life has been darkly colored not just by my own pain, but also by my family’s knowledge of my uneven beginning” (15). Families on Satlin are polyamorous and can involve any number of bonded husbands and wives. New members can be regularly be introduced into the family. The most unique element of the evolution of humans on Satlin is their ability to choose one’s gender at puberty (described as  two stages, first and second blush). Satlin society encourages youth to experiment with various sexual pairings, possible after first blush, before settling on Reethe (the female god of the land) or Dakka (the tempestuous god of storms). All members are described by female pronouns despite choosing a gender. A few individuals are prevented by disease and other factors from choosing and remain in their androgynous state as outcasts.

The novel follows Jobe’s slow realization of the nature of her world and her struggle to identify her place within it.  While her friends and family members identify clear paths, Jobe reflects that “I moved tentatively, cautiously, unsure that I would ever be somebody” (16). Jobe unable to settle on her gender is sent to the island of Option to learn about the world and herself. Jobe retreats within herself, less and less sure of her identity. A ferocious cataclysm, a spaceship crashes through one of the shields allowing radiation and heat to pour into her home region, drives Jobe to desperate action.

My main critique is a structural one. Despite its short length, Moonstar Odyssey is far from cohesive. Gerrold deploys a whole range of storytelling strategies that seldom mesh. Jobe tells her story through autobiographical first person reflection in addition to third person chapters that propel the story quickly from one important moment her life to another. In a jarring manner, pages 31-37 interject an odd dose of dense hard science related to the history of terraforming on Satlik and current experimental projects on various islands. Is Jobe recounting this section for the reader? If so, why? How did she learn this information? Was it added later?

More successful to the thematic core of the novel are three short chapters on the youthful lovers Rurik and Lono—a Satlin myth from three hundred years earlier in an era where only a few individuals had Choice and society was far from accepting. In the myth, Rurik is forced by her father to choose Dakka over Reethe. Lono, who choose with her family’s support Dakka, continues to live with Rurik as societal outcasts. The myth muses on the importance of stories of past intolerance as lenses for the present, and the transcendent and liberating nature of love regardless of gender: “let them love now; it is all they have left” (96). Gerrold does not present contemporary Satlik society as free of prejudice–just as Rurik and Lono’s love was not accepted by all, individuals such as Sola, who were unable to make a choice and remain androgynous, are treated as outcasts. Gerrold uses Sola’s musing on the legend as a “truth” that applies to the present:

We sometimes forget that same-Choice affection was rarely expressed in those times, and, in fact, was something that an unchosen felt she dare not admit within herself for fear of being shown as a deviate or worse, wrong-chosen. Now that we know more of the wider spectrum of human Choice, we can only pity those who felt they had to live in fear (102).

The rationale Jobe recording her early life is far from clear. In addition, the rather nebulous (but positive) ending–possibly in parallel with the legend Rurik and Lono, suggests that Jobe’s life, and the hodgepodge structure novel with its layers of accumulation, is itself a myth. And, in the words of Sola, “A myth is the only way we can ever know the truth” (80).

Superior in every way to the other two Gerrold novels I’ve read: Space Skimmer(1972) and Yesterday’s Children(variant title: Starhunt) (1972). I look forward to reading his best known novel The Man Who Folded Himself (1973) and tracking down a copy of When Harlie Was One (1972).

As a sophisticated allegory with heady themes told in a passionate and well-crafted manner, I am unsuprised that it was nominated for the 1978 Nebula Award but shocked that it hasn’t seen a single reprint. Recommended for fans of introspective 70s SF in the vein of Ursula K. Le Guin’s The Left Hand of Darkness (1969).

EDIT: A reader indicated that in 2014 an eBook edition was released.

*Many of the place name on the map are not included in the story — was Gerrold planning future stories in the world?