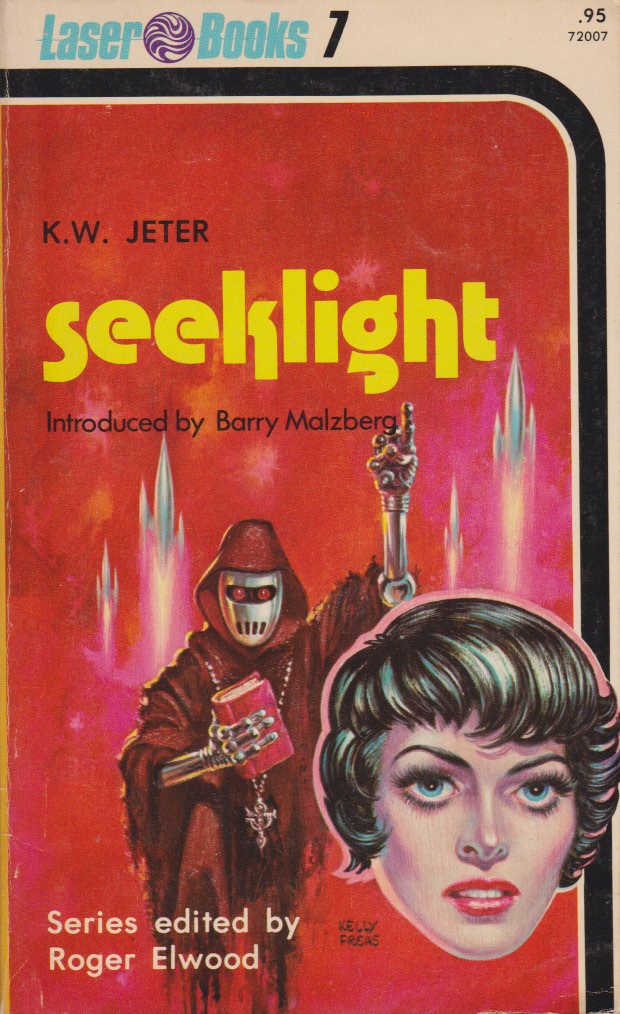 K.W. Jeter’s first published novel is a promising one (*). On a nameless colony world, entropic forces influence all. Humankind speaks less and less and resorts to animistic grunts. Robotic priests go mad. Speculation abounds of a “Dark Seed” (52) implanted by the eugenicists on Earth in the colonist gene pool creating an increasingly crude and lazy population, “wretched and fearful of any change or effort” (46). The landscape itself  is inscribed with the entropic effects: most of the population seems to be engage in quarrying, hillsides are covered with the half-senile robotic bodies of decayed bishops…

And into this physical and spiritual miasma afflicting humans and robots, comes Daenek, who seeks the secret of his past and the deliverance of his people.

Seeklight follows the life of Daenek, the son of the disgraced and deposed previous thane. Daenek lives the life of a pariah, under the protection of the Regent until his seventeenth birthday. Over time he learns the story of his father’s unsuccessful attempt to rule the colony world, and how the label “traitor” is a matter of perspective: “Slandered well, when details are left for each to fill in with his own little fears and hates. Until a thane’s memory is painted over with a traitor’s” (38).

Daenek’s protector, the Lady Marche, refuses to fill in the gaps of his history. Instead the visitor Stepke, a onetime follower of Daenek’s father, teaches him the language of the capitol and provides books and advice. He also receives a mysterious key. After the death of Lady Marche and Stepke and with the Regent’s forces on his tail, Daenek sets off on his own. He joins a caravan, befriends Rennie, a young female busker pretending to be a man. He observes the entropic effects afflicting his planet all around him: man no longer uses machines (125), the population declines (141), even priest robots go mad (51), and translators are no longer needed as humanity speaks less and less (85).

All the while, Daenek is observed (and the people around him) by sociologists who dress as sexless angels and interrogate the populace. Who they might be and what they are doing with the data they collect isn’t entirely clear.

But there are far greater forces at play than Daenek could even imagine. And his attempt to lead his people might be a last and ineffective swing at forces that cannot be abated.

Seeklight is a well-plotted adventure with a focus on Daenek’s coming of age, not only identifying his own purpose in life but the nature of the unusual world in which he inhabits. Jeter’s prose is straightforward and readable, and the odd interjections from the sociologists, although eventually explained within the logic the world, act as jarring New Wave-esque attempts speak directly to the reader. In addition, entropy as both a generative and destructive force, forms the thematic core of the novel.

Recommended for fans of well-told adventure stories with serious themes. I’m not convinced of its staying power as it is somewhat slight–the plot and feel will soon  fade from memory.