An acquisition post of entirely 80s novels? Joachim Boaz, you must be kidding!

1. SF in translation from Quebec! My edition is banged up so I included an image for the 1st English language edition instead. Rachel S. Cordasco sings the sequel’s praises here.

2. I recently finished Joe Haldeman’s Mindbridge (1976), and, despite its rather canned plot, I adored his “way of telling” (use of memos, citations from invented essays, desk ephemera, etc.) I’ll post a review soon. As a result, I purchased another Haldeman novel missing from my collection–his take on near future SF.

3. I have yet to read any of Joan Slonczewski’s novels. This appears to be her best known one… Her first novel, Still Forms on Foxfield (1980) will also be joining the Joachim Boaz SF Library momentarily.

4. Rhoda Lerman’s SF(ish?) novel seems like a fascinating slipstream experiment in medievalism. I’m not sure what to make of the back cover. As always, I am up for a radical experiment.

From the back cover of the 1992 edition: “ONE WOMAN STANDS ON THE THRESHOLD BETWEEN A DYING WORLD AND A NEW HUMANITY…

In the midst of a war-ravaged world, the silent City rises from the decay. Sealed off from the Outside for three hundreds years, it is the final refuge for a handful of human beings, men and women who are the guardians of knowledge and science—and the purveyors of life and death…

Now, in the empty corridors of the City, one among them has created an extraordinary baby girl. Forged from genetic material stolen from the Outsiders, she is the first of a new race–a human being endowed with remarkable powers of rejuvenation. But as Elsa soon discovers, neither her life nor her talent is a gift: both carry a price she cannot, will not, pay. Born to save the City, she may ultimately have to save the world instead–even if it means opposing the very one who made her…” 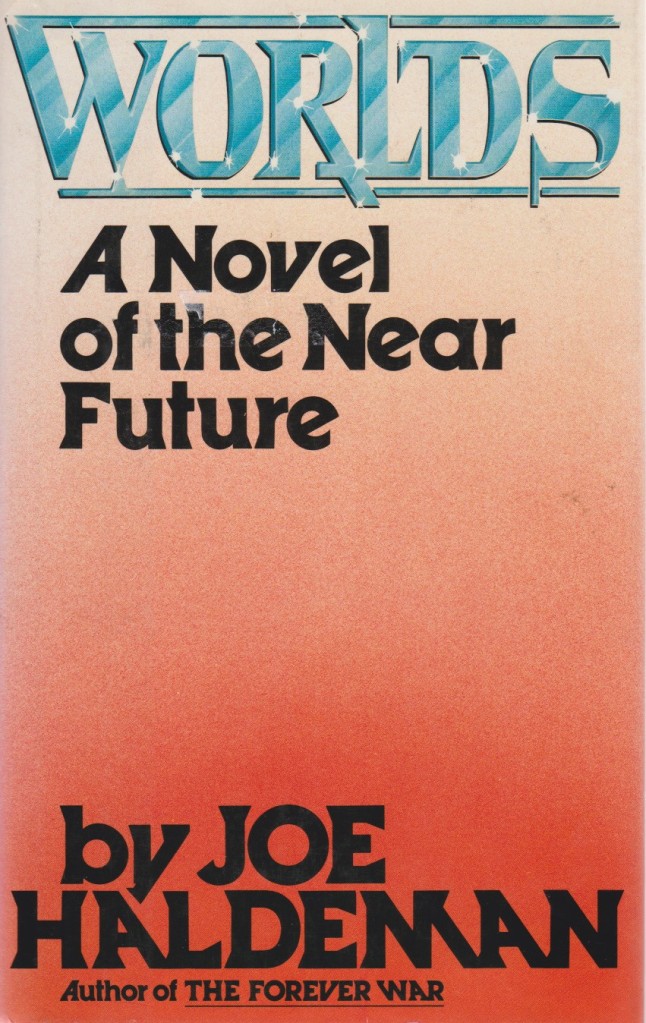 From inside flap: “From the author of The Forever War and Mindbridge and the winner of the Hugo and Nebula awards comes a visionary novel of a very believable and frightening future that is closer than we may think. It is a future where promiscuous sex is obligatory and smoking cigarettes is illegal, and where families avoid 90 percent inheritances taxes by declaring themselves corporations.

The year is 2084, and nearly half a million people are living on asteroids orbiting a pollution-scarred, overcrowded Earth. These “Worlds” have been developed for their mineral resources. Raven-haired Marianne O’Hara, a brilliant political science student who was born in the settlement of New New York, the largest of these communities, is sent to New York City on Earth for a year of postgraduate study. There she becomes an unwilling pawn in a high-tension power struggle between the Lobbies, who comprise the legitimate government of the United States, and the Third Revolution, a widespread and heavily armed political underground bent on the final destruction of Earth.

Marianne’s kidnapping triggers government reactions on Earth and on the Worlds that force humanity to the brink of a war in which there will be no winners.

Like the classics 1984 and Brave New World, Worlds startles with its probing philosophical look at a society that has its roots in the all-too-real political, economic, and social nightmares of our time.”

(Barbara Loftus’ cover for the 1987 edition)

From the back cover: “From the ocean world of Shora, Merwen the Impatient and Usha the Inconsiderate travel to Valedon, the world of stone. The Valens view with suspicion the ancient female race of Shora: with their webbed fingers, their withdrawal into ‘whitetrance’ and their marvelous acts of healing. Where the Sharers of Shora hope for understanding, they are met with aggression.

Joan Slonczewski pushes the moral and political philosophy of non-violence to its very limits in a powerful and gripping narrative. To read it is to see your own future in the balance.”

From the back cover: “The Book of the Night is science fiction at its most challenging and allusive. On the island of Iona, where the tenth-century co-exists with the twentieth, where the old Celtic gods fight against the rising power of Rome, where science and religion are locked in combat, Celeste, girl-child disguised as a boy, reaches puberty. The awakening of powerful sexual desire pushes her into the chaos that exists behind the apparent order of nature and the created order of human culture.”