(Hannah Firmin’s cover for the 1983 edition)

I continue my loose sequence of reviews on medical science fiction with Elizabeth Baines’ evocative fable The Birth Machine (1983) (see notes). Pushing against notions that pregnancy is “medical: illness” (51), the narrative follows a nightmarish tact as an unsuspecting woman is linked up to a nebulously described machine and drugged. Beset by dehumanizing (and often patriarchal) forces, Zelda, without the help of others, comes to terms with her past traumatic experiences that take on the more disturbing elements of fairy tales.

Recommended for fans of feminist, fabulist, and well written SF.

Zelda, described by others as a “good girl” who made a good marriage, enters a hospital for what appears to be a routine pregnancy. Her doctor husband Roland, preoccupied with his upcoming membership exam, ignores and dismisses her worries as those attending her imply they want to induce labor with a new machine: “This machine will revolutionise care on these wards” (12). She soon discovers that Roland might have a hand in offering her to his superiors as a potential test subject. At the very least he is complicit. But first she must struggle with her own past that rears up as the drugs are pumped in.

Roland is more concerned with her attractiveness than her experiences before and during her C-section birth: “‘Oh,’ says Roland. ‘Marvellous.’ Marvellous. Especially for Roland. ‘We’re getting it nice and low, below the pubic hair-line.’ Oh, good. This surgeon must consider she wears very brief bikinis. This patient is a very sexy patient. Or so he flatters Roland” (77).

And there are past (well-hidden) struggles between the couple, that must be confronted if Zelda is to assert herself.

Beautiful and powerful moments populate the pages. Zelda’s memories of her family feel like memories. They focus on sensory cues and searing images—things you would remember! Her mother prepares a rabbit: “She pushed it into the mincer, it choked, she churned hugely at the handle, and slapped back the little arms that flailed; purple bits flew off and stuck like leeches. The air was filled with the high metallic stink of blood” (17). In another passage Zelda and her sister attempt to fix a broken doll–a physical state of the doll forms a recurrent image throughout the novel: “The green-brown liquid dripped through the holes in the skewered head” (37).

The hospital embodies the impersonal: “The sheets and pillows are grey, these days no longer boiled, but steeped in disinfectant distilled in some industrial laboratory, a process which leaves them antiseptic but grey” (10). Baines’ touches, the plastic sheet doors, the condescending child-talk offered by the nurses make these scenes distinctly unnerving.

Chapter 4 features Baines’ most adept weaving of parallel stories. Three strands interlock: Zelda’s dehumanizing experience in hospital, her personal memories that lead up to the traumatic moment, and the experience of birth abstracted out as university lecture. Baines, predictably, links Zelda’s husband’s medical experiments on hormones in rats with the experience of Zelda, also a test subject unaware of the exact nature of her predicament: “Everyone waits. Zelda waits. Waits for bread and jam. Waits for her husband. Up at the centre for Medical Research a rat technician takes up a pin and drives it through the pale pink palm of the first rat for dissection” (22).

I must confess, I was at a loss about many of fairytale elements of the story due to my lack of knowledge about the medium. Someone else out there should give it a go! However, they provide some of linking themes and images. For example, a large black bird–“like a mechanical bird” with its breast lit up “with iridescent colours, the flourescent light of underworld” (59)–embodies the forces of oppression that beset her. The cover artist, Hannah Firmin, narrowed in on the visceral essence of the story!

In a discussion with Megan, over at From Couch to Moon, she mentioned that SF about birth has the tendency of “alienifying” the woman’s body. For example, Judith Merril’s “That Only a Mother” (1948) and the countless horror films about women giving birth to monsters (i.e. 1968’s Rosemary’s Baby)… Baines in The Birth Machine positions her narrative and polemical aims counter to this tendency. Rather than presenting the birth as unnatural, Zelda struggles against attempts to “alienify” her body by the medical establishment, the patriarchal forces in her life, and the growing technological transformation of the birth processes. In addition, she moves past the tendency to blame herself for the flaws and faults of others. And via her resistance to these forces she comes to grips with her personal trauma.

Note: Although described in the SF encyclopedia as “dark semi-surrealist sf,” The Birth Machine takes place in the 1970s. Perhaps an alternate recent past? The machine itself is never described in much detail nor do I know about experimental 1970s machines to facilitate birth, if they existed at all… But the feel surrounding the device is otherworldly, alternate, sinister.

Publication note: I read the original 1983 edition published by The Women’s Press. Apparently Baines was displeased with the ordering of chapters in the first edition and in 1996 released a self-published restored version.  I have not compared the two. However, with this in mind I too found the chapter ordering in the beginning of The Birth Machine slightly odd. It did not detract from my overall perspective on the novel.

Note: Martin Bax’s The Hospital Ship (1976) will be the next book in this sequence. The first — > William Kotzwinkle’s masterpiece Doctor Rat (1976). 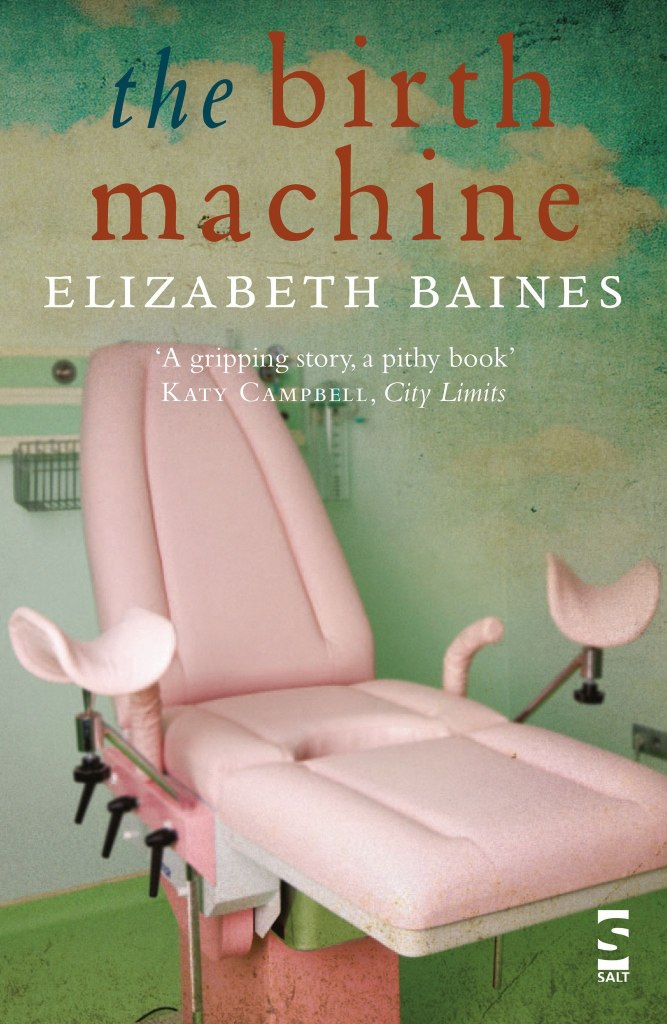 (Uncredited cover for the 2010 edition)