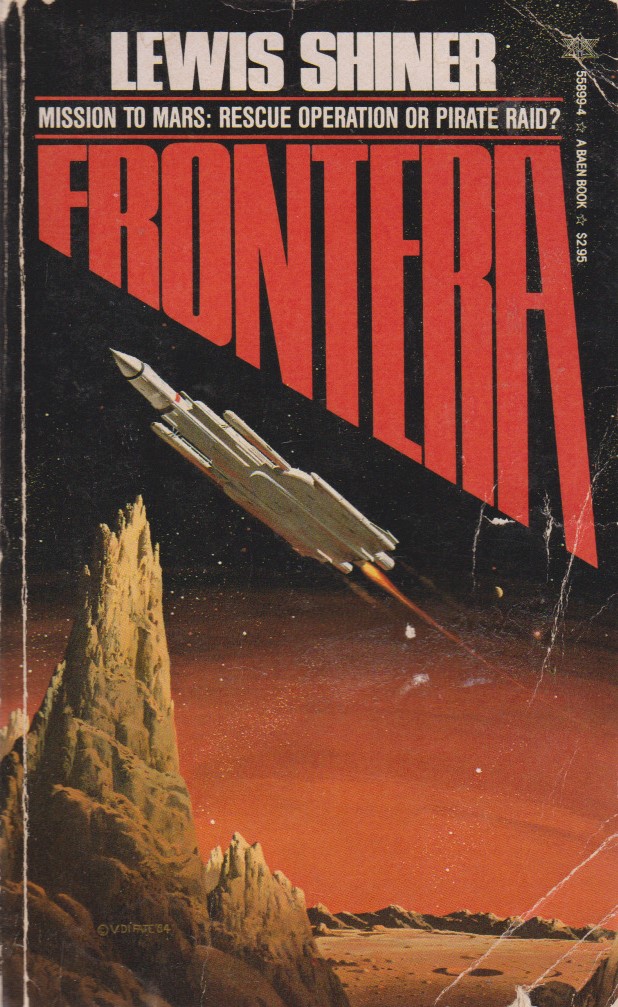 Lewis Shiner’s Frontera (1984), a paranoid romp across post-democratic landscapes (both Earth and Mars) of decay and corporate takeover, contains a hypnotic premise and a not entirely convincing plot. Be prepared for a maelstrom of ideas and images: Subliminal messages. An abandoned Martian colony. Implanted Biological RAM. A dangerous voyage to Mars in old NASA shuttles. Corporate mercenaries. Hyper-violence. Mutant children. Transcendent mathematics.

Frontera‘s near future terrifies. In a period of worldwide governmental collapse, corporate conglomerates such as Pulsystems carved up the spoils. Like a sinister coup from within, companies siphoned power from the U.S. military by creating personal mercenary armies from the “best strategists and munitions people” and “protecting overseas investments from terrorists and rebel government” (60). These corporations have taken on, at least according to their propaganda, some of the more benevolent operations of the old democratic governments, including a “pension” the majority of the population (only half employed) receive i.e. a “riot prevention tax” (72).  Pseudo-governmental motions cannot erase the real purpose of their existence: the acquisition of profit. Pulsystems, as NASA’s main creditor, purchased the remains of the space program–“the entire Johnson Space center in Clear Lake, two shuttles, launch privileges at the Cap, and certain specific hardware already in orbit” (53). Abandoned cars litter Houston’s previously bustling highways—a fraction of the population remains cowering in the shadows of the corporate edifices.

From Earth to Mars: The war-scarred Kane, the nephew of Morgan, Pulsystem’s CEO, is a corporate mercenary implanted without his knowledge with a sophisticated piece of biotechnology. He leads a ramshackle group of ex-astronauts on a new voyage to Mars financed by the company. The mission: investigate the colony of Frontera, abandoned by Earth for a decade. The reason for the voyage remains unclear. Kane’s reasons for joining are not entirely known even to himself as his uncle compels him to strange deeds via subliminal messages and the chip in his brain…. Kane, possessed by searing headaches and an imagination that fixates on “endless hideous details of the disaster on Mars; cryptic, desperate messages typed into video terminals, slaughtered livestock, tiny deformed skeletons,” attempts to come to grips with the dangerous “disembodied compulsion urging him” on  (31).

Reese, America’s aged astronaut hero from the time when America existed, joins the mission despite his hatred for Pulsystems, in which he “saw a sort of messianic madness that had no regard for individual lives, only for image […] and the vindication of history” (53). The possibility that his daughter, one of the colonists abandoned on Mars, survives and his own desire for one last voyage of exploration motivates him.

The expedition sets of with the Russians hot on their heels.

On Mars: The Russian and American colonists of Frontera eek out a precarious existence in the decrepit remains of their colony. Molly, Reese’s daughter, attempts to care for her mutated daughter Verb, a mathematical savant, and temper the actions of her increasingly psychotic husband, Curtis, who happens to be Frontera’s leader and savior. Frontera has secrets. And Pulsystems wants them. And the arrival of the astronauts threatens all of their lives. But who knows what. And who knows what when.

It is hard not to read Frontera as partially in dialogue with Philip K. Dick’s Mars-centric novels and stories—for example, Martian Time-Slip (1964) and Clans of the Alphane Moon (1964). Shiner’s world reeks with trauma, paranoia. and decay. Mars is a  dangerous and unglamorous world: “no ancient races and lost civilizations, no canals, no hidden valleys with jungles and perpetual clouds. Just the dry, empty husk of a planet and the few fragile lives clustered under the dome” (148). As with the inhabitants of Dick’s Mars, Frontera’s mutants hold powerful (and debilitating) gifts.

Frontera‘s premise and world are its most appealing elements. A patina of decay covers all: from the space program and its old ships and dated equipment to the physical and mental strain afflicting the occupants of the surviving outpost of humanity’s last voyage outwards. Kane’s deep pain and inability to ascertain his purpose claw at him like a “giant roc from mythology, digging deep into his heart” (10). Like the “mold,  thick and bluish gray growing to shoulder height on the foam walls” on the abandoned outpost on Deimos (25), the ambiance of fear wafts like clouds of spores. There is a distinct feel that this is the last voyage of exploration. The last resources have been spent. The last astronauts are dead or dying. The last hope of salvation resides under a dusty dome. And humankind will be humankind… blood will fall on the Martian sands.