(Paul Alexander’s cover for the 1979 edition)

Garry Kilworth’s first novel, In Solitary (1977),  attempts to present a morally complex take on human revolt against brutal alien conquest. A brief read, In Solitary piques interest but doesn’t manage to provide compelling backstories to beef up its analysis of the morality of revolt.

Ultimately, In Solitary (1977) does not live up to its compelling premise. Recommended for die hard fans of 70s SF and those fascinated by ambivalent takes on rebellion.

1. No member of the Human Race, born a native of the Planet Earth, may have contact with any other such native, by any medium, natural or otherwise, after the age of 170 months, except for the performance of mating.

2. No member of the Human Race under 170 months of age, born a native of the Planet Earth, may have contact with any male member of the same race.

The penalty for disobedience of The Soal Law is death (6).”

The bird-like Soal conquered Earth and imposed draconian measures on suppressing revolt. Humans, expelled from their homelands, eek out their existence in marginal territories (for example, the muddy tidal flats of the English Channel). The entire Soal system is predicated on preventing humans from effectively breeding and congregating. Tangiia braves the Pacific ocean alone on his Polynesian canoe for the chance to mate.

Meanwhile, a handful of humans reside with their Soal conquerors. Cave, our action-wary main character, spends his days with his Soal friend Lintar, wandering the vast fields of bacteria vats, the food-source of the bird aliens. His life changes when he is discovered “investigating the tapes contained in the Soal history archives” (12). Expelled from Brytan with only a crossbow (you wander the Channel mudflats in the nude), he meets up with Stella and her newborn (who promptly dies of exposure)—in direct violate on Soal law (see The Soal Law rule 1). Avoiding other mudwalkers, Stella pushes the idea of REVOLT. Cave cannot help but remember the fond moments he enjoyed together with Lintar. Stella, a woman of action, appears to know more than she lets on.

Soon,  Stella meets up with Tangiia and hatch a plan—and Cave reluctantly tags along. The Soal are hot on their heals.

“The mud wastes, smooth and ugly; the monotony broken only by wrinkles, ridges and rays left by the retreating tide. This was the stomach of the world, slip open and spread flat exposing a dull grey colour and veined textures: enzymes and juices left in the crevices and hollows of corrugated tissue” (24).

I found the Soal transformation of Earth’s landscape the most fascinating element of the novel. As with John Christopher’s surreal crossing of the English Channel in A Wrinkle in the Skin (1965), Kilworth also uses the Channel to signal how much the world has changed. Here it’s a muddy tidal flat interspersed with unusual Soal spires (that double as refuges at high tide). Humans, evicted from their historic places of habitation on the mainland, instead wander the muddy landscape, dependent on Soal goodwill, avoiding each other for fear of retribution. Massive mushroom towers, interspersed across the globe, maintain a standard temperature (10).

The use of Polynesian mythology and technologies is a nice touch as well. Kilworth’s interest in cultures that aren’t normally part of science fiction or fantasy is a common theme so far in the works I’ve explored. The integration of Arab culture and Islamic theology in The Night of Kadar (1978) is far more sustained and integral.

Kilworth does not shy away from flawed characters. Cave often serves as a mouthpiece of Soal propaganda. For example, he acknowledges that he originally believed the words of Lintar spouted that justified his race’s brutal treatment of the humans: “Humans,’ Lintar had once informed me, “are solitary beasts. They live apart from each other because they react violently to one another’s moods. Put two in a cage together and before the month is out one or both will lie dead on the cage floor” (61). While his friendship with Lintar might be believable, Cave’s reluctance to admit Soal brutality makes him a challenging character. Stella’ flaws aren’t immediately apparent. As her backstory is revealed, ideological chasms emerge between her and Cave.

When the revolt gains steam, Kilworth’s frustrating narrative tick—the tendency to describe an action sequence after it occurs—undermines the novel’s tension.

(Adrian Chesterman’s cover for the 1979 edition) 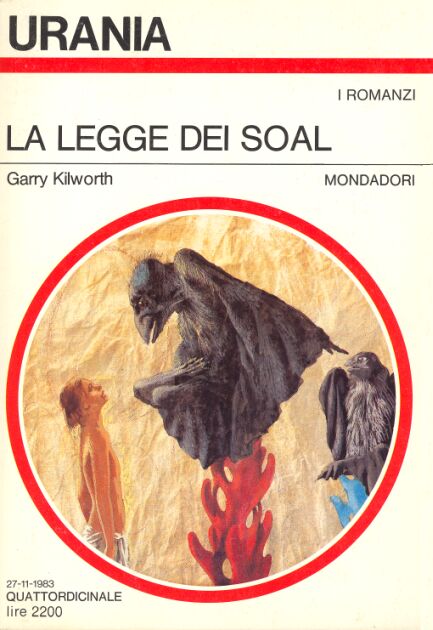