My “to review” pile is growing and my memory of them is fading… hence short—far less analytical—reviews.

As I’ve been on a generation ship kick as of late, I was excited to pull out my copy of Samuel R. Delany’s early novel The Ballad of Beta-2 (1965). Delany subverts the standard (and infuriating) trope of cultural stasis—for the sake of societal stability—that authors suggest will occur between the colony ship’s departure and arrival. Instead, Delany explores the intermediary generations by examining a series of ballads that harbor deep secrets.

The novel’s basic premise is a seductive one: Vast generation ships set off to colonize an alien world. After their departure, humankind discovers FTL travel. The generation ships arrive only to find the planet already settled. In orbit, the surviving degenerate colonists still reside in their massive spacecrafts.  The wreckage of another destroyed ship orbits with them. A youthful anthropology student, tasked with investigating the surviving literary works of the Star Folk dismissed by previous scholars as uninteresting drivel, sets off to learn more from the survivors who created the Ballad of Beta-2. He discovers that the imagery and metaphors of the poem hint at the “true” history of the voyage—and the awesome implications of an alien creation.

The underlying premise—and exploration of the cultural production of a generation ship crew—is rarely touched upon in the subgenre. That said, the titular ballad whose meaning is unpacked over the course of novel, is a poor piece of literature. It’s visually awkward and not compelling enough to frame the entire story.

I found The Ballad of Beta-2 one of the few Samuel R. Delany novels that falls flat. Babel-17 (1966), published the following year, showed more of Delany’s  immense potential. Recommended for his fans and those craving an inventive approach to the basic generation ship story.

(Davis Meltzer’s cover for the 1975 edition)

(Ed Valigursky’s cover for the 1965 edition)

The Last Transaction deploys an effective structure—the jumbled meandering memories of a ex-President descending into senility. His memories, mostly of the sexual nature (but also the failure of his first marriage, the untimely death of his son, his second marriage to a far younger woman, and a national crisis), converge on his failed reelection campaign of 1984. The inclusion of a brief biographical blurb, like what you would find in an encyclopedia, for President William Eric Springer (birthdays, wives, dates elected to office), provides the necessary framework into which plunge headlong into the nightmare. At turns hilariously funny–the President, his feet propped up on a pillow, mumbling his last words into a recording device, while his nurse and his doctor allow the media in to ogle—and uncomfortably empty (Springer doesn’t seem to stand for anything as an elected official), this feels like a descent into madness. A sifting through of useless yet self-defining memories….

If you’re new to the bleak black comedies of Malzberg, The Last Transaction is not the place to start. There’s a sharpness missing, a loss of enthusiasm, a reluctance to experiment–it lacks the metafictional touches that elevate novels like The Men Inside (1973). It all feels a bit tired. The idea between other projects? Or, perhaps the novel’s shock value, the disgraceful/empty last thoughts of a president, has lost its power in the era of Trump.

For Malzberg completists only. 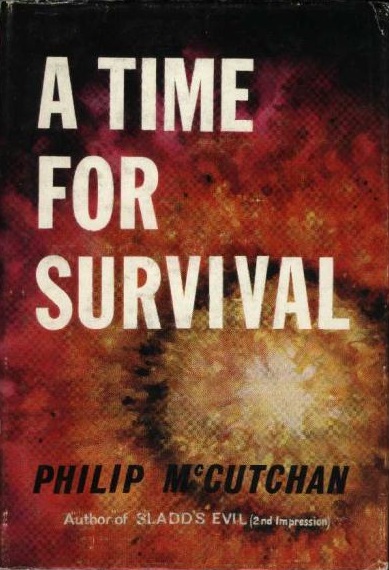 The year is 1975/1995 (two dates are given), the Chinese with their Soviet allies engage in open nuclear warfare with the UK and their American allies. Johnny and Anna Clayton and their newborn son Mike survive the nuclear attack in a government fallout shelter. Mr. Clayton’s metallurgic research (skills needed if Britain is going to remake its weapons and warships upon reemergence!), confers him and his family VIP status. With the rest of their shelter blasted into smithereens, the family treks for London–he needs to report to Command!

They encounter a racist sailor named Blacker, and partially due to the 25-year age difference between Anna and Johnny, a lot of sexual tension transpires…. Blacker gives Anna a mirror. She says it’s the best gift ever. McCutchan, who wrote primarily military fiction, unsurprisingly creates horrid female characters. Imagine Cormac McCarthy’s The Road (2006) but on the A3 between Portsmouth and London—but without all the gorgeous language and sheer visceral terror.

A Time  for Survival treads similar ground to John Christopher’s The Death of Grass (1956). While Christopher posits an almost instantaneous reversion to survival of the fittest, McCutchan suggests the slide into primitive barbarity for individuals will be slow–of course they are but caught in the middle of the faceless entities of the Cold War power blocs. I found McCutchan’s theory on human nature a far more believable one—good people will eventually, as the true nature of their destroyed world sinks in, resort to evil. That said, unlike Christopher’s far superior contemporary A Wrinkle in the Skin (variant title: The Ragged Edge) (1965), McCutchan’s prose is possessed by a banal economy of language and vision. There are no evocative sequences of devastation. No surreal moments encountering the traumatized. It is relentlessly bland.

Only recommended for die-hard fans of 60s post-apocalyptic fiction.

Note: Sorry about the poor quality of the above cover. The internet does not seem to know the book exists–no Goodreads votes and very few covers. My edition is a cast-off from the Montreal City Library. Between 1971 and 1976 it was checked out 10 times. As it is a library book, it came without a dust jacket.