Detail from Dean Ellis’ (?) cover for the the 1st edition

Glen Cook’s first novel, The Heirs of Babylon (1972), is one of a handful of science fiction works in his extensive catalog. He’s best known for two fantasy sequences, Chronicles of the Black Company and Dread Empire. Operating in standard post-apocalyptic territory (wrecked landscapes created by nuclear and chemical warfare), Cook weaves a disturbing tale of the power of militaristic fantasies and traditions. While suffering from diminishing narrative impetus as the ancient warship Jäger steams towards its inevitable end, The Heirs of Babylon transpires within a well-wrought Earth hellscape with a deeply flawed main character caught up in a ritual of war he cannot (or chooses not to) escape.

The World: The year is 2193 and The Political Office in Gibraltar “rules” over a series of fragmented states that eek out their existence at the edges of Europe and the Americas. The resistance resides in Scandinavia, “spared the might bombs” (12). Kurt lives in the “quasi-medieval” society in the “bones of the fallen German” (12), one of a handful of states along the Baltic Sea coast that make up the Littoral. These states were occupied by the “Descendants of the Germans, Poles, Danes, Lithuanians, and Latvians” who lived in small, scattered settlements. Every generation the call goes out for the Meeting, the gathering of all available fleets, for the battle to end all battles against the enemy. Every year the technology of war  diminishes. Kurt’s city of Kiel prepares the Jäger, a 250-year-old American warship from WWII, repurposed by numerous nations in her long history. The men of Kiel, excited by the idea of battle, grow increasingly terrified at the real prospect of war.

The Story: “The fatherland. The best part. We’re maggots feeding on its corpse. We steal from the dead, create nothing new, waste what little we have on this endless madness—I’ll not damn our baby to it! Not just to give the Littoral another sailor to die at the next Meeting” (12). Before his departure for The Meeting on board the Jäger, Karen, Kurt’s wife, reveals two secrets–she’s pregnant and fleeing to Telemark, the city of the resistance. Kurt, who has the opportunity to accompany Karen, decides to follow his father and grandfathers footsteps.

Caught up in the machinery of war and the forces of tradition, Kurt attempts to keep the Jäger from running aground. The crew encounter wrecks and attempt to navigate shoals with charts in other languages. The majority of the story focuses on the daily events on this ship. In a strange sequence of events, Kurt becomes the confidant of Beck, Jäger‘s sinister Political Office. Disturbing events transpire on board–a murderer is on the loose. What are his motives? Is he an agent of the resistance?

Eventually Jäger reaches Gibraltar and waits for the accumulation of ships from the surviving navies of the Allies. In an effort to learn English to read the superior charts, Kurt meets the elderly Fitzhugh. From his teacher Kurt learns about the reality/ritual of the war–in distinctive Orwellian fashion. A new history of the conflict emerges…. one tradition sidesteps. But the voyage to Australia awaits…

For me, the most appealing element of The Heirs of Babylon will frustrated the majority of readers: the main character, Kurt, despite his revealed knowledge of the workings of the world, refuses to act. While those around him do—Karen flees to Telemark with his child, assassins attempt to murder Beck,  crews rebel against their leaders and refuse to complete the journey to the Last Meeting, and Fitzhugh dispenses knowledge right under the nose of the The Political Office—Kurt rather follow the path set out for him. Cook suggests that the forces of tradition and heritage can anchor us to distinctive paths—and some cannot break free even if the fetid inner machinations of destruction are laid bare. Kurt identifies what is wrong with the world, is sympathetic to the aims of the resistances, and holds no allegiance to the Political Office yet cannot rouse himself to action. And despises himself for it.

The type of main character creates a narrative itself suffers from a lack of impetus. Exciting events and conspiracies occur yet Kurt tends to observe rather than participate. An engaging mystery within the crumbling Jager (who is the secret Political Office agent), yet Cook allows bodies to pile up too long. The mystery peters out as fewer and fewer suspects remain.

In a way it all plays into Cook’s thematic core—the inevitability of martial conflict, the  lives it will consume, and how youth who go along with their orders generation after generation. The Heirs of Babylon is a study in inaction, the passive consumption of the dictates from above, even when the lies are for all to see. 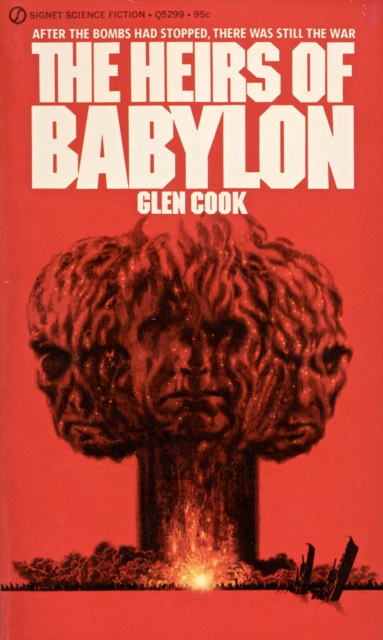