Matt Tracy’s cover for the 2008 edition

There is no cover or interior blurb for the 2008 reprint edition. From the back cover of the 1972 1st edition: “MOTORMAN is Moldenke, a man living in the City of one possible future—a man of little strength, few feelings, four implanted sheep’s hearts ticking away inside his chest, and a need to seek out the point where the square of existence becomes round. Of course it can’t be done, but his imagination sets out anyway on a voyage across the “bottoms”—the borderlands of his conscious—to give it a several-hearted try.”

Initial thoughts: Biblioklept tweeted about David Ohle’s cult classic literary concussion of a dystopia and I couldn’t help but snatch up a copy. I know little about the novel — but count me intrigued! I wish I could afford the first edition with its gorgeous cover! (see below)

From the back cover: “There was something strange about the Ann Bonny‘s mission to the unexplored world called Chameleon. Though only women were judged fit for space, Earth’s Central Computer had for some reason placed a man among them–an artist who was not docile like other men.

For Language Specialist Gia Kennedy, the answer lay in the baffling rituals of the planet’s primitive natives—an answer that hovered just out of reach. There, in the heart of an alien wilderness, Gia would defy her culture and discover an ancient truth.”

Initial Thoughts: Both the author and book are unknown quantities! The Jim Burns’ cover makes me deeply suspicious of its contents. Hah. SF Encyclopedia suggests Finch has feminist aims along the lines of Joanna Russ but far more interest in conveying them via standard genre tropes. 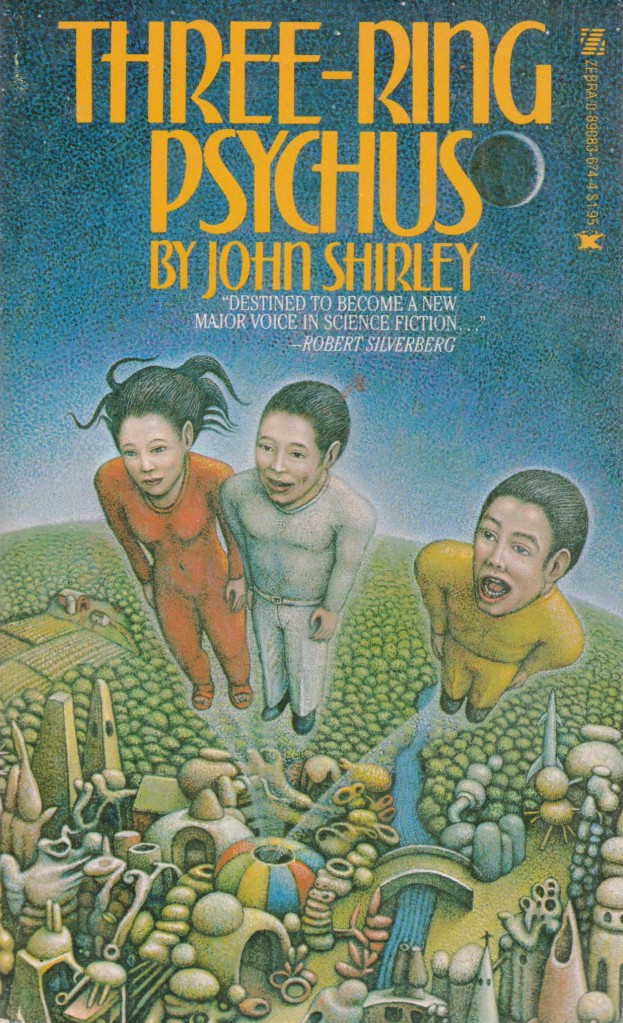 From the back cover: “‘IT IS ALL VOLUNTARY, CATASTROPHE IS THE WILL OF THE MASSES.’

2013 A.D. with an intolerable population crisis and impending global conflict, the human race was faced with an alternative war: war and destruction, or moving into the next stage of psychic development.

The old rules were meaningless; anarchy and violence prevailed. It was with great pain that people learned the collective unconscious was becoming conscious, and empathy meant mass suffering.

But with all this the old prejudices survived, and men still turned to force as the answer to their problems.

Could humanity learn to adapt… and survive?”

Initial thoughts: My 70s/early 80s collection of John Shirley’s novels nears completion. Despite my acquisitions, I have yet to read more of his work since my review of his proto-cyberpunk novel A City Come A-Walkin’ (1980). 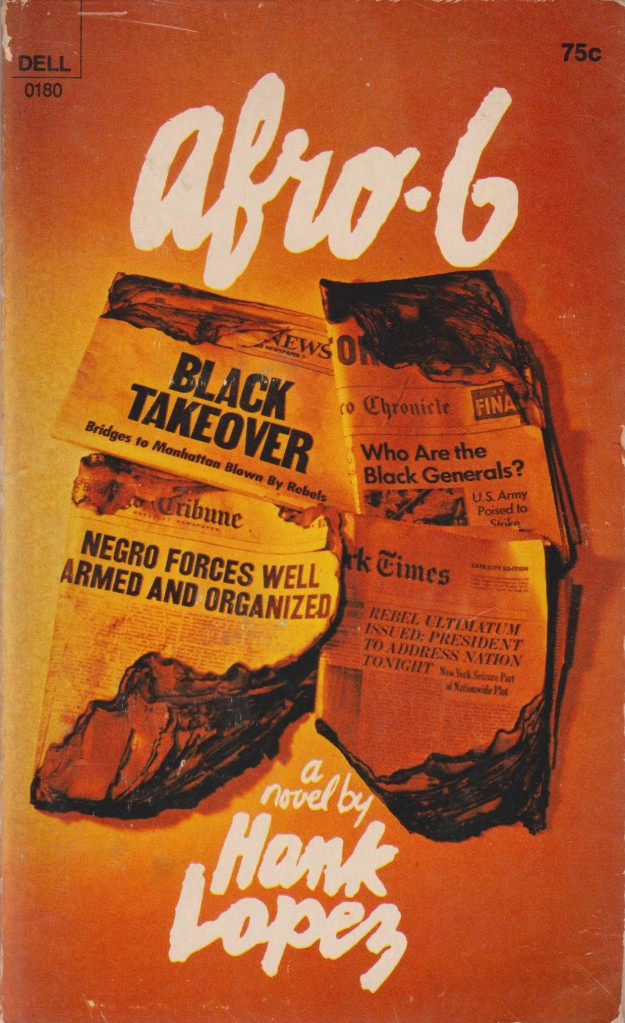 From the back cover: “BLACK TAKEOVER. B-Day was October 1st. Everything came off on schedule. All bridge to Manhattan were blown. Subways and railroads were paralyzed, the police knocked out of action. A select group of the Super Rich were captured and held as hostages. The Black radio broad broadcast the rebels’ ultimatum.

The uprising had been planned for months, down to the smallest detail, by the brilliant, highly educated underground Black Power Elite.

NEW YORK WAS IN BLACK HANDS–A STUNNED AND FRIGHTENED NATION TENSED FOR THE NEXT UNPREDICTABLE MOVE.”

Initial thoughts: According to what little I can find about Hank Lopez, Afro-6 appears to be the first Chicano SF novel ever published. Clearly a commentary on contemporary fears (it was published immediately after MLK’s assassination and subsequent riots and the growth of the Black Panther Party), Afro-6 presents a near future black takeover of New York City. There are a host of this type of novel. As always with pulp, the ratio of sensationalism/Blaxploitation vs. commentary is hard to identify from the cover alone.