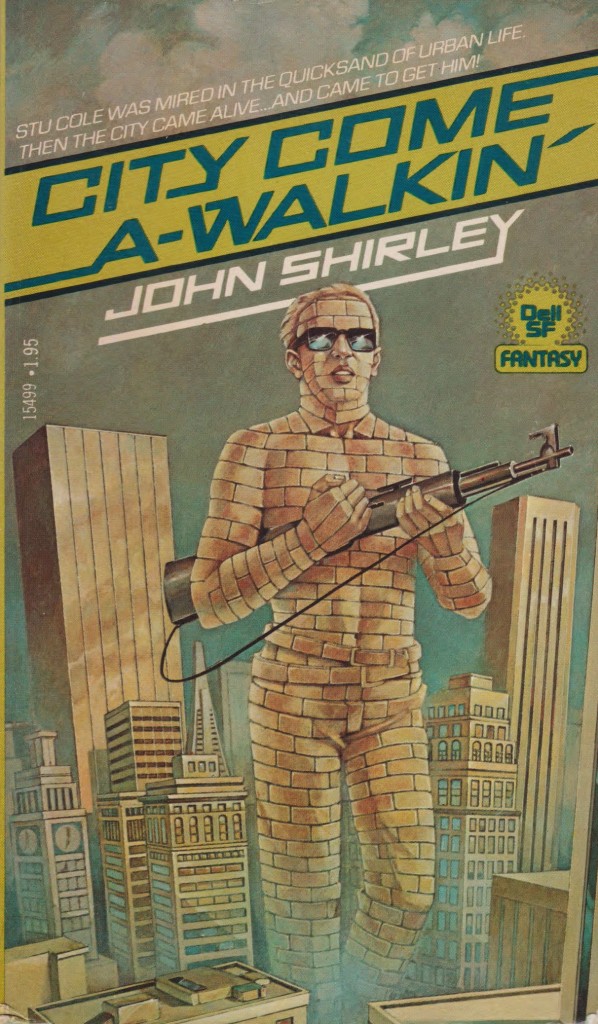 “It’s the gestalt of the whole place, this whole fuckin’ city, rolled up in one man. Sometimes the world takes the shape of gods and those gods take the form of men. Sometimes. This time. That’s a whole city, that man” (18).

John Shirley’s City Come A-Walkin’ (1980), an early cyberpunk novel, succeeds as a surreal and earthy paean to  diverse urban community and punk rebellion. A club owner and angst rocker join forces with a physical manifestation of San Francisco to fight the forces of technological change. While a brilliant evocation of aesthetic and emotion with sympathetic main characters, Shirley struggles to pull the reader in to the mechanisms of the hackneyed political corruption plot.

The year is 1991. San Francisco, a violent landscape of urban decay/vibrancy, approaches a technological juncture. The City itself, made human at night, a gestalt of its inhabitants’ fears and desires, fights against the forces of transformation. Cole and Catz find themselves inexorably drawn into a violent confrontation between the entities that control the streets.

Cole feels at home in the city with the denizens of the streets, wandering the multi-ethnic zones, taking photos with his Nikon of the cityscape, visiting the vibrant gay community…. I would argue that the novel comes off as remarkably gay-positive and accepting for science fiction of the late 70s/early 80s. Cole describes the gay neighborhoods as “overflowing with laughter and affection” (71). He enjoys the “sense of communality in their caresses […] and their joyful rebellion” (71). The majority of the people in 1991 still disapprove of them, “especially the neopuritanical movement” (71). Cole, on the other hand, celebrates their company and love. Shirley’s account of future San Francisco extrapolates from the vibrant Castro area gay scene (the arena of Harvey Milk) and the prominent lesbian neighborhoods of the Mission District in the 70s.

Cole’s friend (and eventual lover) Catz Wailen performs her brand of improvised angst rock from the club’s stage, her body contorted in “a hundred permutations of the moth’s last spasm as it burns in candleflame” (15). Catz, able to “see beyond” the translucent nature of the world (118), appreciates Stu’s willingness to take a risk on her radical music. She is far less susceptible to message of the city’s manifestation, that emanates a mechanical disco beat, when he walks into Cole’s bar…

Catz proclaims “That’s a whole city, that man” (18). The atavistic City draws his power from the sleeping and those “watching TV” (156). With Catz and Cole in tow, he ingratiates himself as a mediator, reconciling lost souls with their parents, attacking the corrupt gangs that threaten the urban reality. The City, able to enter human bodies and appear spectral through view screens, wages a war against the political forces bent on undermining the dynamic interlaced organism of relationships and communities.

As a “matrix of ideas, concepts pressed into concrete and asphalt,” The City embodies the whims and fears of its people. And Cole, as he instinctively understands […] “the secret geometries of the city,” allows himself to be its agent (81). Cole rationalizes the violence he commits (with the City’s instigation). Catz, on the other hand, sees through the paranoid manifestation of fear of change, and draws her motivation from her respect for Cole—or at least, until his ability to act as an individual is taken away.

Shirley conjures INTENSITY and MOOD with ease. The extended concert sequence—a band costumed as “gnostic holy men, initiate magicians, and alchemists” (84) masochistically moving “in bizarre choreography” in an “invocatory urban voodoo rite” (84)—is gorgeously wrought. We gaze with the mesmerized audience at the hologram of “a naval destroyer” sized beast with its “mouth opening to reveal the bars of a city jail from which  prisoners peered with hollow eyes” (85).

Shirley’s love letter to the seedy underside of San Francisco of the 70s doubles as a moderately complex analysis of the urban environment.

“[San Francisco] is a unique city in some ways because it’s so compressed. I mean, it’s all crowded—the main part of it—onto this little peninsula, and up and down these steep hills. That means that the Latin communities and the black communities and the Filipinos and the Chinese and the Japanese and the gays, gays everywhere, and the Arabs and East Indians and the middle class whites—they’re all rubbing shoulders all the time, their various ‘ghettos’ overlapping. So there’s a strong feeling of community, I think” (25).

Shirley argues that the crowded and dirty environment  of the cityscape allows vibrant communities to form and express themselves freely. This is unusual for the era. For example, in John Brunner’s Stand on Zanzibar (1968), from a decade earlier, the overcrowded city creates cultural homogeneity rather than foster individuality.

In Cole’s pre-club owning life, he agitated against a cashless society (47). Cole argues that corruption will run rampant when institutions will be able to control and gather personal financial data on the individual. In addition, Cole (and Shirley) suggest that technological advances–for example working through “technerlink” terminals rather than in a physical office—will lead to decentralization and destruction of the community (140). It’s not clearly defined how this might occur and why particular individuals wouldn’t still choose work and live close to each other. Perhaps Shirley is speculating on the power of undefined fear? Or, the novel’s message is unformed and scattershot.

Despite Cole and Catz’s action-packed and violent adventures with the amoral City, the plot starts as a maelstrom that soon loses most of its coherence. I could level a similar critique at William Gibson’s seminal Neuromancer (1984). In both novels I found the ambiance and way of telling more captivating than the plot.

Recommended for fans of early cyberpunk, future cities, and SF that screams locale and feel and tone. In these areas City Come A-Walkin’ excels. I look forward to reading more of John Shirley’s work. 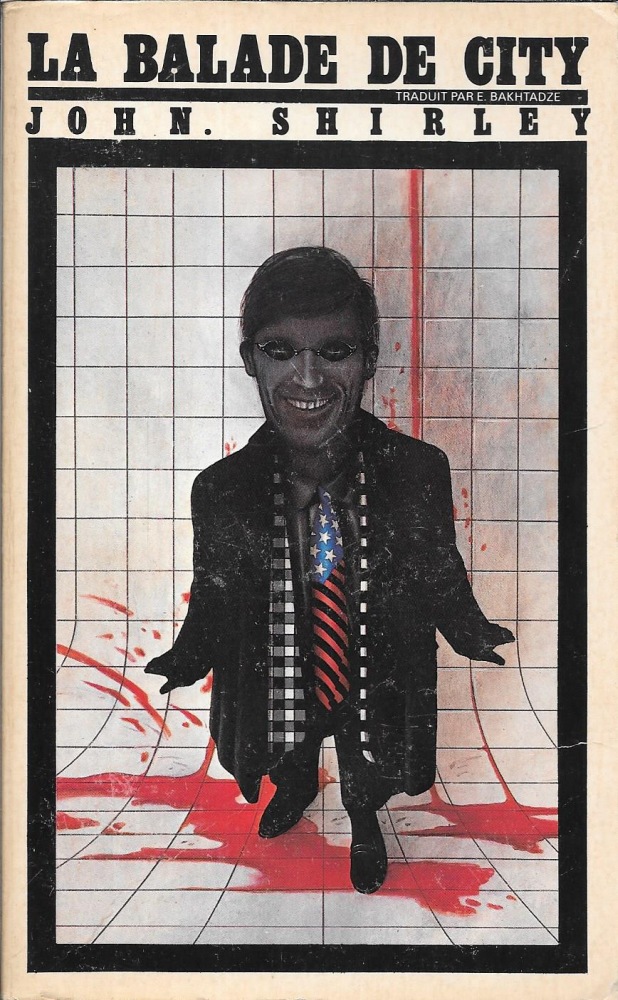 (Keleck’s cover for the 1982 French edition) 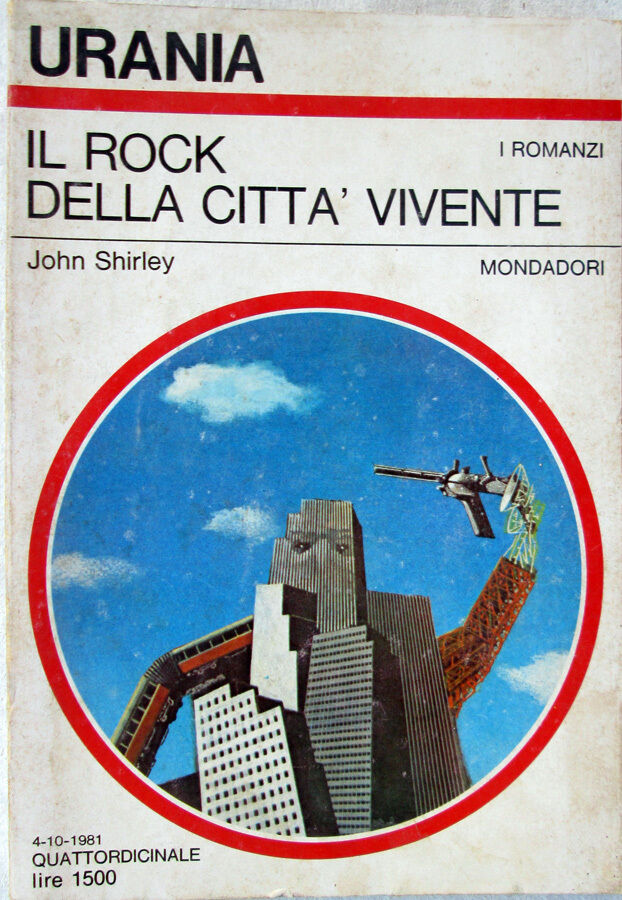 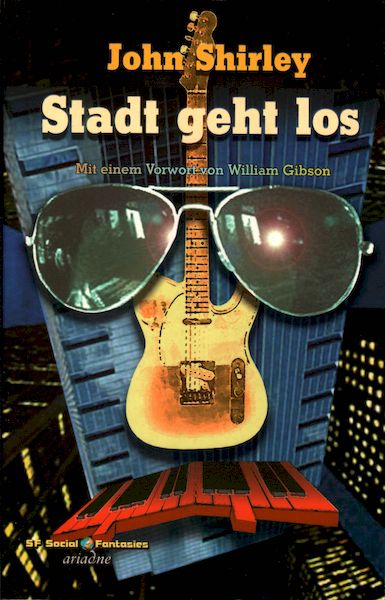