“No city, no town, no community of more than one thousand people or two hundred buildings to the square mile shall be built or permitted to exist anywhere in the United States of America” (Thirtieth Amendment of the United States Constitution) (1)

Nominated for the 1956 Hugo Award for Best Novel. Leigh Brackett’s The Long Tomorrow (1955) not only clocks in as the best of her work I’ve read so far but also joins my pantheon of favorite 50s SF visions (*).  At first glance Brackett’s novel appears to traverse standard SF juvenile territory where a teenage boy, in a religiously and socially oppressive society, encounters an object  and memories of the past that opens up a path to self-discovery. But memories are memories. And dreams are dreams. The world is a far more violent and rocky place.

Highly recommended for all fans of vintage SF.

The New Mennonites, an amalgamation of the Old Mennonites and the Amish, survive and thrive in a post-nuclear war future (*). Brackett suggests that, as cities are the primary targets in the nuclear war, those less dependent on technology will repopulate the countryside (*).  What survives of the American government, now in Maryland, passes the Thirtieth Amendment that prohibits more than 1,000 people and 100 buildings per square mile (1). In an America without cities, the agrarian lifestyle prevails with a good dose of religious justification.

Len and his cousin Esau chaff at the strictures of their small farming community, Piper’s Run. They dream of finding the semi-mythic Bartorstown, “way out West,” built by the US government before the war (29). Len’s grandmother, who lived through the nuclear war, regales him with her childhood memories of cities—the details come off as an advertisement for 50s white suburban life:

They had big movie theaters, huge, with plush seats, and supermarkets twice as big as that barn, with every kind of food in them, all in bright shiny packages—the things you could buy any day in the week that you’ve never even heard of, Lennie! White sugar, we thought nothing of it. And spices, and fresh vegetables all winter, frozen into little bricks. And the things there were in the stores! Oh, so many things, I couldn’t begin to tell you, clothes and toys and ‘lectric washers and books and radios and teevee sets (31).

Despite his fascination with a world of cities, Len feels the pull of his current way of life with the tight-knit community and bucolic pastoral vistas (36-37). Len and Esau sneak off to watch a sermon. Violence breaks out when a trader is accused of wanting to bring back cities and stoned. Traumatized by the killing, Len slips back into the routine of his farm life. However, the actions of Esau, who steals a radio from possessions of the dead man, bring bring radical change and the end of their childhood. Eventually, Esau and Len figure out how to turn on the radio and “ever since that night when they had heard voices Esau had turned somehow strange and wild, not outside but inside” (59). The trader Mr. Hostetter, who took the murdered man’s possession, denies he’s of Bartorstown despite Esau’s plaintive inquiries.

After the town discovers their escapades, Len and Esau flee down the river to Refuge, a larger trading community comprised of more diverse non-New Mennonite sects with “different problems” (78). Both fall under the tutelage of the friendly merchant Dulinsky, who seeks to build one more warehouse than the Thirtieth Amendment allows. Refuge is split between those who want to prosper economically and those who, like the New Mennonites, see warehouse as a violation of God’s will and “the most basic law of this land” (86). The warehouse, according the the local Judge Taylor, is but a step towards cities which he claims “were dying even before the Destruction” (84). A violent confrontation convulses the community, and Len and Esau escape with Amity (Esau’s soon-to-be wife) in tow. Mr. Hostetter reemerges and promises to bring them to Bartorstown, although it will be unlike anything they imagine.

The trip across the west serves as an act of deconstruction. There is no turning back—Mr. Hostetter received special permission to allow Len and Esau to know of the existence and location of the mythical place. The youthful visions of technological utopia are debunked. Len feels betrayed–he pines for his life at Piper’s Run. And there’s a secret under the western mountains, and not all is as it seems.

Leigh Brackett’s reluctance to provide easy answers fascinates me. So often the oppressive world escaped from is painted as so evil that must be entirely remade. Not here. Brackett’s coming-of-age tale manages a complexity not found in other similar visions.

Book 1 oozes rural Americana. One feels like Len and Esau give something up when they flee their home.  Len feels pride in his life: “A sense of warmth began to spread all though Len, and with it came a passionate, wordless love for this place that he was looking at, the fields and the house, the barn, the rough woods, and sky. He understood what Pa meant. It was good, and God was good. He understood what Pa meant about a contented heart” (37). The tight community of Piper’s Run where “everybody got together and helped everybody else” feels “natural as the falling of the leaves and the preparations of the squirrels” (36).  While the dream of Bartorstown and his grandmother’s fond urban memories propel him out of Piper’s Run, he misses his previous life and his kindly family. His father’s vision of the new world, while a time-worn refrain, is a seductive one. He argues that only those who are able work with their own hands and avoid luxuries have created a society of peace and plenty out of the devastation (32). The world he flees, while oppressive, is not pure evil.

And the world he enters, as his childhood passes and his utopian visions are dashed, are also far from good. Brackett’s differentiation between ideological longing vs. the nitty-gritty of lived experience, adds both moral complexity to Len but also depth to her world. While some critics identify Book 3 as losing its momentum, I would beg to differ. Book 3 dashes all youthful hopes. Book 3 provides emotional depth and complexity. Book 3 provides loss and sadness and Piper’s Run becomes the fond memory.

Note 1: I’ve read and reviewed The Big Jump (1955) and was unable to finish The Starmen (variant title: The Starmen of Llyrdis) (1952). As a general rule, I am uninterested in her overt pulp SF and fantasy stories such as the Venus or Eric John Stark sequences (bibliography).

Note 2: Brackett seems to think that pre-nuclear disaster the Old Mennonites and the Amish were the same group regarding their views on technology. It depends on which Mennonites. Perhaps she’s thinking of Old Order Mennonites? For example, all the Mennonites at my local farmers markets use cars and trucks to transport their produce. This does not weaken Brackett’s extrapolation that both groups will thrive in a decentralized agrarian future. Also, I don’t know how much Mennonite views on tech have changed since Brackett wrote the book.

Note 3: While published in 1955 after the 1952 “Ivy Mike” Hydrogen bomb tests (not known to the public until 1953) that revealed the devastating presence of a fallout, Brackett does not include any mention of radioactive dust clouds. The Long Tomorrow‘s nuclear war is a conventional non-fusion nuclear weapon attack that would destroy cities like Hiroshima and Nagasaki but not send radioactive dust clouds across the rest of the country. Historical context (the timeline of nuclear development) matters a lot when tackling these stories. 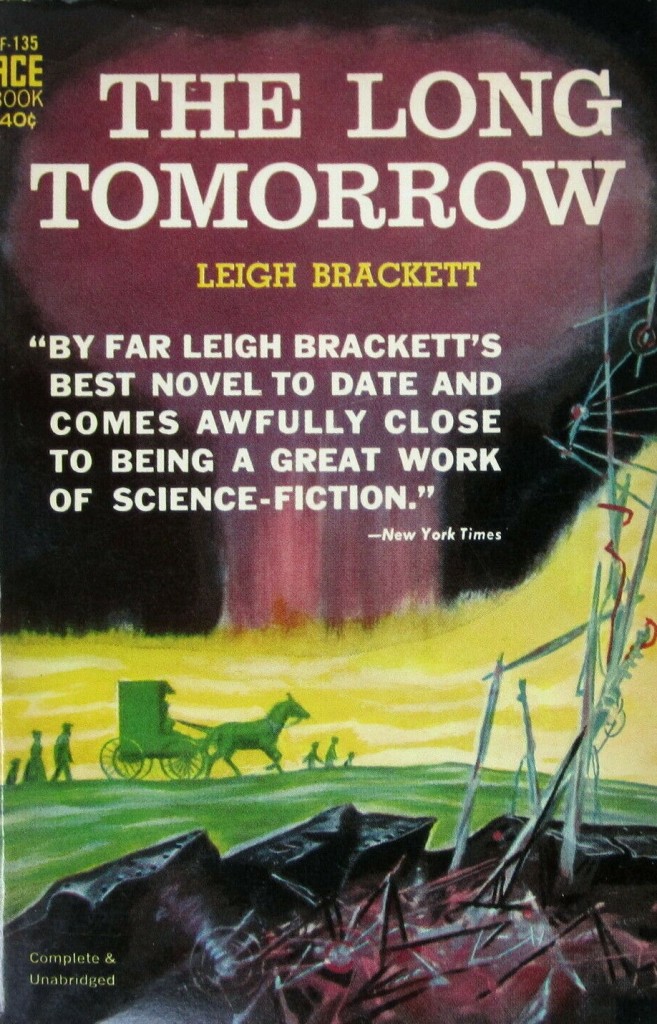 (Ed Emshwiller’s cover for the 1962 edition) 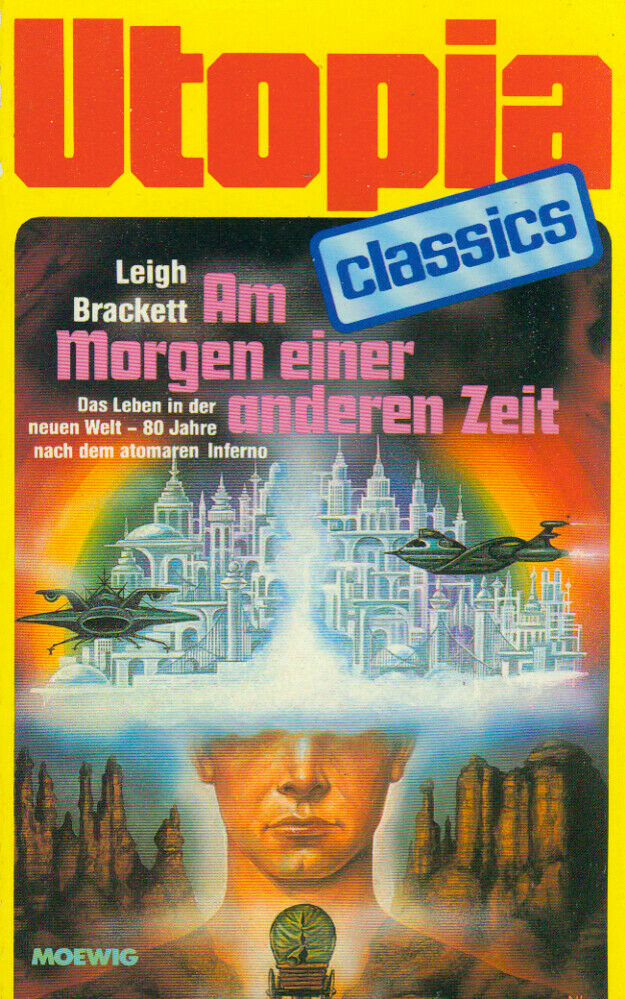 (Allison’s cover for the 1976 Italian edition) 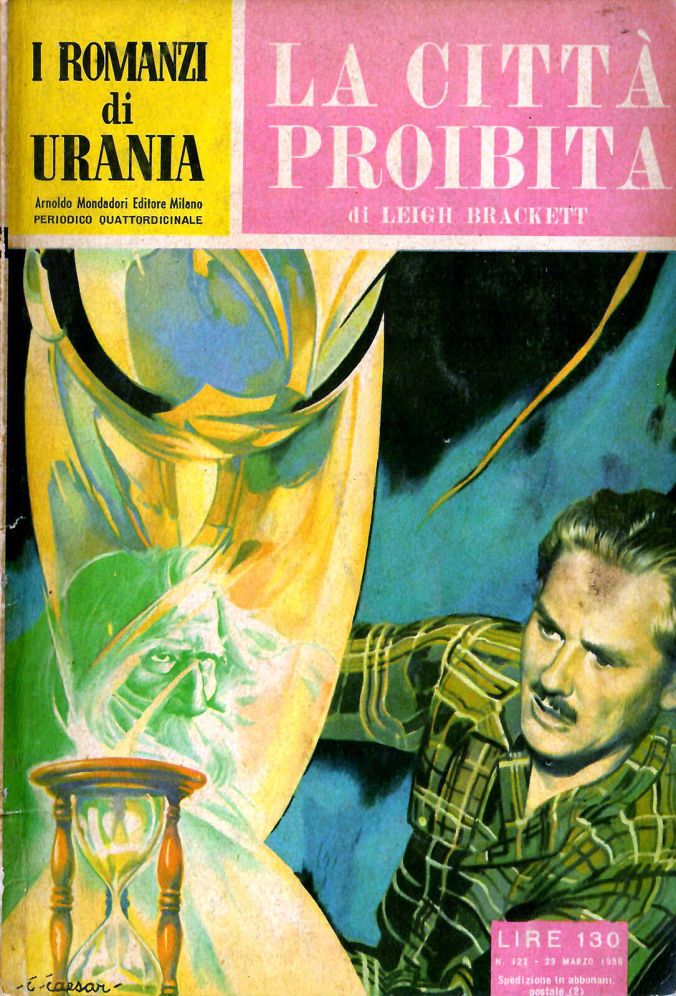 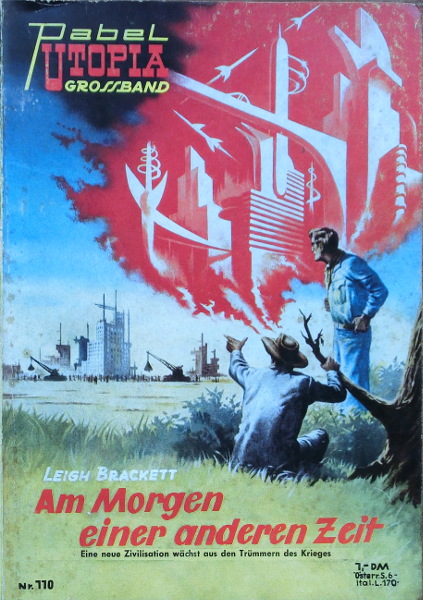 (Uncredited cover for the 1962 edition)