This is the first post in a loose series on SF short stories I’ll be reviewing that are critical in some capacity of space agencies, astronauts, and the culture which produced them.

If you know any stories that might fall into this category published before 1980, let me know in the comments! I have compiled an extensive list (from Barry N. Malzberg to John Sladek) but my encyclopedic tendencies are mere delusions of completeness…

Up next: Edmond Hamilton’s “What It Like Out There?” (1952) in the December 1952 issue Thrilling Wonder Stories, ed. Samuel Hines

Walter M. Miller, Jr. (1923-1996), best known for his Hugo-winning fix-up novel A Canticle for Leibowitz (1959), wrote a fascinating range of short fictions between 1951-1957. I’ve previously reviewed a handful in The View From the Stars (1965). However, “Death of a Spaceman” (1954), a complex exploration of death and the delusions we tell ourselves and ones we love, might be the best of his I’ve read yet.

Retired spacer Old Donegal (“Donny”) lies in his bed dying of cancer: his family “had all known it was coming, and they had watched it come” (7). In his rundown house with his long-suffering wife Martha at his side,  he waits for the inevitable release with his magnasoles on his shriveled feet propped up on his bedframe.

Slice-of-Life Realities and The “Real” World Out There

“‘Did you like horror movies when you were a kid?’ asked the psych. And you’d damn well better answer ‘yes,’ if you want to go to space” (17).

In this future, space travel is a dangerous blue-collar occupation (Note 1). After the terror of blasting off dissipates, you spend your time crawling through “dirty mazes of greasy pipe and cable” with the “omniscient accident statistics” flitting through your head (16). Spacers spend the vast majority of the trip soaring “in ominous silence” drinking smuggled booze (17).  And if you are one of those statistics and die in space, as happens with Donny’s son-in-law Oley, one’s spouse receives a mere pittance of financial remuneration.

Nora’s interactions with her father suggests a pernicious capitalism is afoot–the wealthy, who have walled themselves off from the working class, make their fortune off of spacers like Donny. And while they dole out their pathetic pensions for the spouses of the dead and go through the pretensions of sending their sons to space, Nora suggests they are only in it for the cash.

And Old Donegal tells himself that it was all worth it.

The Delusions We Tell Ourselves and Those We Love

“Can I talk about dying now?” he wondered aloud. She pinched her lips together and shook her head. “I lie to myself, Martha. You know how much I lie to myself?” She nodded slowly and stroked his gray temples. “I lie to myself about Ken, and about dying. If Ken turned space, I wouldn’t die—that’s what I told myself. You know? (17)”

On his death bed Old Donegal cycles through a series of delusions. He plays games with his wife about returning to space. Martha, unwilling to outwardly acknowledge the extent of his illness, plays along. He refuses to voice the fact that his grandson (Ken) does not want to follow in his footsteps. He attempts, one last time, to convince his daughter Nora that the death her husband was a heroic event (16). He refuses to mention that men have made millions off his labor and the deaths of countless astronauts from the safety of earth.

And in this moment, as death approaches, he makes his peace with his flawed world, despite the reality of it all, as sometimes the lies we tell ourselves are all we have.

The short story presents rich narratological layers. There’s overt interplay between “Death of a Spaceman” (1954) and Arthur Miller’s play “Death of a Salesman” (1949). Both Donny and Willy are 63-years-old and self-deluded.  As it has been too long since I read the play, I’ll leave this element to someone else to explore.

I am far more interested in the way “Death of the Spaceman” interacts with pulp science fiction— i.e. “drivel written in the old days” about the “romance” of space (16). Donny negatively contrasts his own experience with the stories that are told about the stars and adventure.

Miller doesn’t set about smashing it all with a bludgeon  (like Malzberg would at the end of the next decade), but rather presents future experiences as prone to the same moments of painful self-reflection as life comes to its end. He charts the emotional roller coaster that waffles between moments of calm and the growing tension/anger/helplessness…. and after Donny tells all his “rotten messes” to the priest (20), he comes to the realization that we make who we are, sins and failure and sadness and all.

Note 1: James Gunn’s Station in Space (1958) stories have a similar blue collar emphasis on the conquest of space. Gunn’s fictions, despite the same stark brutality, present suffering as a process in forging “Man” rather than  generating delusions.

Note 2: A play on Barry N. Malzberg’s “Apocrypha as Produced or: The Way We Wished it Happened” in Universe Day (1971).

A few anthologies where “Death of a Spacemen” appeared 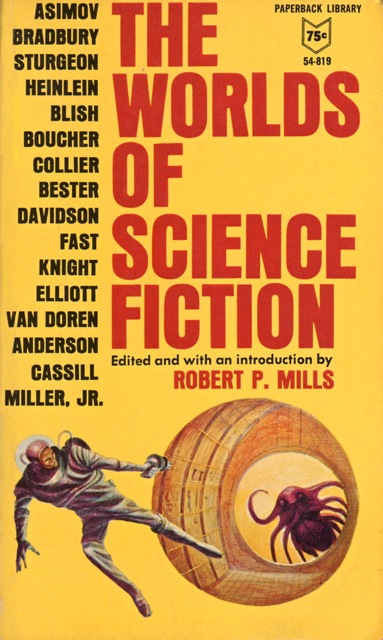 Jack Gaughan’s cover for the 1965 edition

Carl Smith cover for the 1966 edition

Robert Foster’s cover for the 1971 edition

Richard Powers’ cover for the 1971 edition