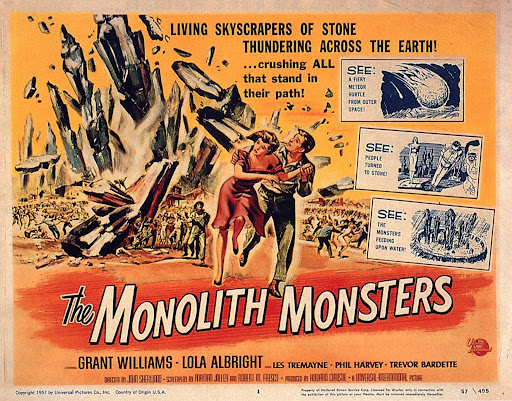 John Sherwood’s The Monolith Monsters (1957) is by far one of my favorite  B sci-fi (ish) monster movies!  I’m being very generous with rating but, this is a hilariously average (but wonderful) romp with one of the more peculiar “monsters” matched up with some of the best 50s special effects I’ve seen.  The Monolith Monsters is without doubt one of the more interesting films of the 1950s American Realist Science Fiction movement and B sci-fi in general (I’m not counting films that transcend their B movie status and enter the ranks of the greats — The Monolith Monsters has no pretensions of being anything more than a B movie and unabashedly isn’t).

The most arresting quality of the film (besides the special effects) is John Sherwood’s creation of a small town ethos with a kaleidoscopic group of characters instead of concentrating solely on the two leads.  The plethora of secondary characters with substantial screen time include the local newspaper writer, a geology professor, the local police chief, the local doctor, a doctor from the city, etc.  Sherwood manages to enhance the isolation of the town and its resulting close-knit ethos with a bleak and isolated setting — a town at the dusty rock strewn edge of the California desert.

I was also surprised by the female lead, Cathy (Lola Albright) — the male geologists value her input and ask her to help with the experiments although she’s not a scientist but rather the local school teacher.  All in all there’s nothing egregious about the film’s gender dynamics — something which often plagues films of this period and beyond.

The film begins, in pseudo-documentary mode, with a brief voiceover introduction (with accompanying stock footage — of course!) on meteors.

The premise is simple: a meteor from some unknown distant part of the galaxy crashes into many small pieces near a dusty California town.  The meteor, unactivated by water, is benign.  Various towns people pick up the interesting rock (which looks like obsidian) and bring it to their homes.  However, a particularly large chunk is accidentally activated by contact with water and kills a geologist.  This meteor has the ability to turn people completely rigid by sucking out all the silicon from their victims’ skin. 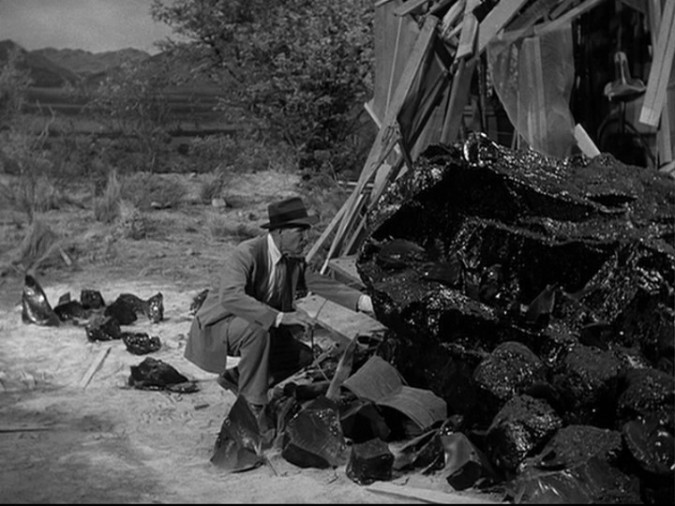 On an excursion into the country one of Cathy’s students picks up a large chunk of the meteor and brings it home.  Later that evening the rock is activated when the girl drops it in a bucket of water and the meteor grows and destroys her entire house and kills her parents.  And the coolest part is the fact that the little girl’s hand has its silicon sucked out by the rock!  She’s sent to a city doctor who comes up with a cure.  It’s up to the local geologist Dave (Grant Williams fresh off the success of The Shrinking Man) and his one-time professor to apply the principles of this medical cure to defeating the meteor which is cascading down the valleys destroying everything in its path (the picture below) 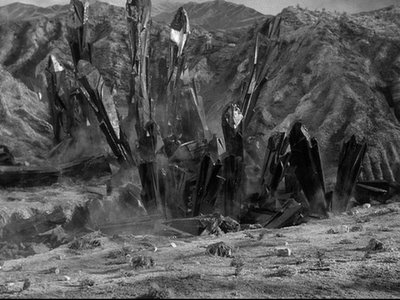 The images of the meteors growing, cracking, growing again, rumbling down the valley destroying buildings are absolutely spectacular!  I was shocked at the quality of these 50s effects (even if the premise sounds hokey watch it for the last third)! The film is also blessed with a surprisingly solid plot that doesn’t falter (although the ending is painfully abrupt).

All in all this is a must watch for anyone who loves B sci-fi or popular 50s entertainment!  The small town ethos, the relatively ok acting, the special effects, and straightforward well-paced plot make this an endearing little gem.

20 thoughts on “A Film Rumination: The Monolith Monsters, John Sherwood (1957)”