Everyone!  I’ve decided to start a new series of posts!  An episode by episode log of my reactions (including, but not limited to rants, ravings, tangential ruminations, mutterings, and indecipherable utterances) to Space: 1999 (1975-1977).  I’ve never seen the show before and don’t have very high expectations.  But with 2001: A Space Odyssey inspired visuals and some 70s flare (see the hilarious costumes of the cast image below), how bad can it be? (haha).  A general naïveté (on my part) permeates the air — in all-likelihood soon to be dashed (in spectacular fashion) on the rocks! 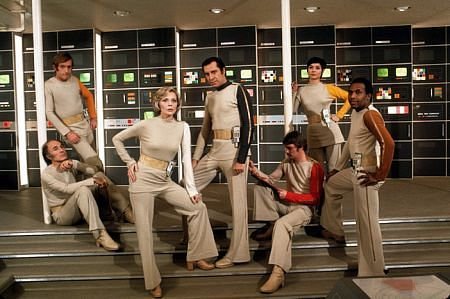 And so we begin….

First impressions of the first episode

1. A multi-racial cast — alas, the ones who have substantial lines are all white.

2. One must have a Russian for charm — à la Chekov in Star Trek: TOS.

3. There appear to be functional spaceships (Eagles) for the Moonbase!

Sometime in the near future (well, 1999) our hero, John Robert Koenig (Martin Landau!) is assigned to Moonbase Alpha (in a large crater on the Moon).  He’s been ordered at all cost to make sure that the Meta Probe (which will send a crew to the planet Meta) is launched.  However, there’s what appears to be a virus — which has killed and continues to kill people — on the base which Chief Medical Officer Dr. Helena Russell (an icy Barbara Bain) is unable to figure out.

The Moon has been used by Earth governments as a nuclear waste dumping ground.  Dr. Helena Russell believes that the illness resembles radiation sickness.  So, Commander Koenig has the shipments of waste stopped.  Soon a nuclear waste site burns out in a magnetic fire-storm!!!

The crews try to avoid the impending disaster of the remaining nuclear sites exploding.  A race against time!  DISASTER!  The Moon moves!  Away from the Earth!  Yikes!  Into space it goes — a moon spaceship! And, mysterious electromagnetic noise signals appear on the screen!

I don’t really care that the science is impossible.  Yes, I know, the Moon can’t be jogged that easily out of its orbit into space.  Science aside, I found this to be a promising debut episode.

The characters certainly haven’t been developed (if they ever will be).  Dr. Helena Russell is icy and rather banal.  I don’t really have an opinion yet about Commander Koenig or any of the secondary characters who flit in and out of the scenes not doing much.

The sets are great!  Besides the absence of actual equipment — the medical lap is practically empty and most of the scientists in the control room stand around looking intently at one or two knobs on a large table marking things with a pencil — the rooms, spaceships, space docks etc are well done and the aesthetic is appealing (for example, the commander’s office has a wall which opens to the main control area).  One doesn’t get a sense of Moonbase Alpha as a whole — yet.  There are tons of people supposedly on the base but we don’t see anyone besides the immediate crew.

The cinematography, influenced by 2001: A Space Odyssey is quite good for a television show — we’ll see if it maintains its flare or if it’s only a symptom of the need to make an eye-catching first episode.

A top-notch pilot!  However, I doubt it will maintain its momentum.