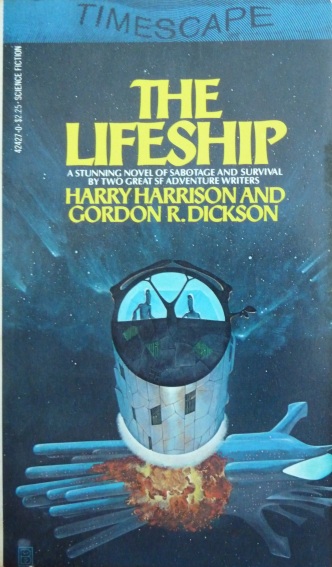 Harry Harrison and Gordon R. Dickson’s The Lifeship (1976) is two parts tense and exciting adventure in the expanse of space and one part half-hearted “key differences between individuals are overcome in the end” attempts at social commentary.  I found the first two-thirds of the work riveting.  Sadly, the final third devolves into a ramshackle and unpleasant mixture of save the world formulae and endless exposition at gunpoint about all the nefarious nooks and crannies of each and every plan, counter-plan, potential plan, half-realized plan, and unrealized plan soon to be fomented in the liminal realm of coalescing plans.

At points in the narrative Dickson’s delightful ability to portray alien societies pokes through.  Thankfully the work avoids anthropology lectures on the alien Albenareth who remain tantalizingly enigmatic and original.  Not having read any of Harry Harrison’s other works I can’t zone in on specific aspects of his style — hopefully it’s not the muddle of the last third.

The Albenareth are an enigmatic alien race that considers space travel a religious experience.  To die in space is the ultimate honor.  Time served in space transporting other races adds to that honor.  They provide their expertise of space travel to humanity which does not have the technology yet has the massive natural resources to build and repair their ships.  However, the Albenareth are a decadent species whose spaceships, spacesuits, and societies are slowly crumbling as more and more seek a life (and death) in space.

Giles Steel, our human main character, is a member of the highest strata of human society.  Most of humanity lives in a form of indentured servitude reinforced by genetic tinkering.  Giles slowly comes to appreciate the lower levels of society as the novel progresses.

The novel opens with a massive explosion on an old Albenareth transport vessel.  Giles Steel, seven indentured humans, and two aliens escape in an Albenareth lifeship.  The lifeship maintains oxygen and supplies food by means of growing vine inside the vessel (not as weird as the alien seedpod spaceships in Aldiss’ The Dark Light-Years).  The Albenareth captain and engineer sequester themselves in the front of the vessel leaving Giles Steel and the other humans in the back.

Soon various revelations are uncovered: a) Giles Steel’s mission, before the explosion on the transport ship, was to assassinate his one-time friend Paul (the leader of a radical revolutionary group seeking rights for the indentured), b) Giles planted the bomb but the explosion wasn’t supposed to destroy the ship, c) one of the indentured humans is a cop, d) the female Albenareth captain doesn’t mind dying in space as they eventually get to their destination and by that point everyone would have run out of food…

Giles Steel is an interesting character.  He’s a onetime revolutionary who has since forsaken his earlier desire to free the indentured majority of humanity.  However, over the course of the dangerous voyage on the lifeship he comes to appreciate the indentured as fellow adults instead of children or “lads.”  The social commentary comes off as forced and the simplicity of this sort of race analysis is out of place in a late 70s work.

The other slowly coming to an understanding plot thread is between Giles and the Albenareth captain.  Giles, as the as the high class representative of the humans and the only one who understands the alien’s language, must decode the alien’s society in order to navigate a cultural impasse.  The Albenareth, in the overtaxed environment of the small lifeship, wouldn’t mind dying in space because she would regain the honor lost in the destruction of the transport vessel.

The Lifeship is worthwhile for fans of claustrophobic space adventures and interesting alien societies — but don’t expect a masterpiece.  But, be warned — he final third is a frustrating hodgepodge of themes, abrupt revelations, silly backstabbing, and simplistic attempts at social commentary.